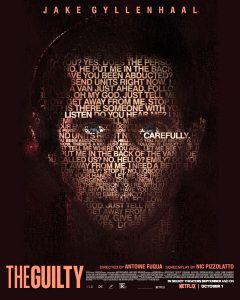 Is Jake Gyllenhaal the most underrated actor working today? He can do drama, comedy, thrillers, action, and even musical theater. He’s a heralded talent for sure, but I’m not sure there’s a better American actor working today than him. Gyllenhaal’s only been nominated for an Oscar once (BROKEBACK MOUNTAIN), but he should’ve been nominated for PRISONERS and NIGHTCRAWLER, and he deserves a Best Actor nod for his new film THE GUILTY too. We’ll see if the Academy is wise enough to do so, but his virtuoso performance is utterly remarkable as he holds the screen virtually alone for 90-minutes.

THE GUILTY, in some theaters now and premiering on Netflix October 1, was written by Nic Pizzolatto, adapting it from the Danish film that was on the Academy shortlist for Best Foreign Film in 2018. Antoine Fuqua directs Gyllenhaal here and he is an expert filmmaker of both character studies (TRAINING DAY) and actioners (THE EQUALIZER). Fuqua only has a single location to work with this time but it’s a dramatic doozy, an LAPD call center where Gyllenhaal’s cop character Joe Baylor is working as a 911-operator. He’s on the nightshift, handling all that he can with raging wildfires bringing LA County to its knees on a hot summer night.

At first, Joe seems cool and in control even with all the chaos outside. He manages each caller with aplomb, wisely directing those in need to the proper assistance or gently calming those who are panicking over nothing. Gyllenhaal even gets an opportunity to score some laughs as Joe reacts with comical exasperation to a few ridiculous folks on the phone, like the drunk businessman who thinks a hooker swiped his wallet. Soon after, however, Joe gets a disturbing call from a young woman and it changes his life.

The caller is a young mother named Emily (the voice of Riley Keough) and she’s secretly calling 911 from the speeding car driven by her estranged husband Henry (the voice of Peter Sarsgaard). As Emily pretends to talk to her 8-year-old daughter Abby (the voice of Christiana Montoya), Joe shrewdly surmises that she’s being kidnapped. As Emily ‘play-acts,’ Joe acts quickly, tracking her signal, and feeding the info to nearby highway patrolmen. He’s belligerent and hostile with his fellow cops on the phone, demanding that they ignore the blazing forests to protect this beleaguered mother. His fervor convinces them, however, and they get a bead on the vehicle.

Job well done, but it’s not enough for Joe. He wants guarantees in a business that seldom delivers them. Soon enough, to ensure the safety of Emily and her daughter left alone at home, Joe starts overstepping his bounds. He calls Emily and Henry on their cells, and even sends a squad car over to their separate homes. Over the course of his overreach, the story starts to reveal why he went from patrol cop to desk job, turning into a fraught and often harrowing portrait of an officer on the edge.

To tell more of the twists and turns would give away too much of the serpentine plot. Suffice it to say, Fuqua knows how to ratchet up the tension, turning the single setting into a suffocating location for Joe. The cop’s accelerating descent into darkness is ably assisted by Maz Makhani’s moody cinematography, Jason Ballantine’s crackerjack editing, and Marcelo Zarvos’ insinuating score.

But make no mistake, this is a vehicle for Gyllenhaal, and he is never less than mesmerizing. His Joe wears every emotion on his sleeve and even when he’s acting irresponsibly, the actor ensures we never lose sympathy for the character. Gyllenhaal’s body language speaks volumes, as does his voice, often going from a whisper to a bellow in seconds, and yet it never feels like overacting.

It’s a hell of a performance, as is this economically produced nailbiter. It may be a virtual chamber piece but it has big things to say about abusing authority, the importance of listening, and the healing powers of honesty. It also manages to do something that few other films have been able to do this year: pin us to our seats from the very moment it starts and keep us there until the final credits.

from The Establishing Shot https://ift.tt/2YbHk8D
via IFTTT