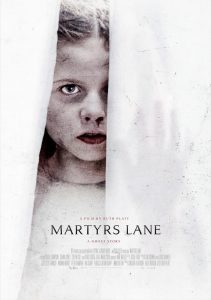 Usually, horror films are filled with many slow-witted characters. They’re that way to make them easier victims, clueless and unaware of their surroundings, thereby easier to pick off by a ghoul or goblin. In the new film MARTYR’S LANE now streaming on the horror platform Shudder.com, the main character is anything but dim. Instead, 10-year-old protagonist Leah (Kiera Thompson) is one smart cookie, wholly in touch with her surroundings. The little girl may be too painfully aware, in fact, a kid who readily senses her mother’s depression, the psychological games adults play, and all the noises and shadows at play in her spooky house. When some supernatural events start to occur, is it because Leah’s so sensitive that the other side is reaching out to her, or is what’s happening all in her head? This is a horror movie as driven by the thoughts in Leah’s head as by the things that go bump in the night.

This new horror film, written and directed by Ruth Platt, is one of the more savvy and sophisticated frighteners to come down the pick in some time, a story about a disturbed little girl whose life becomes more disturbing by the intrusion of a supernatural presence. (Honestly, I don’t want to say too much more so that everything will surprise you.) And as Leah’s haunting story is set up, Platt surrounds her with elements ripe enough to spook anyone.

Leah and her family live in one of those English villages surrounded by woods and winding roads. The townsfolk seem on the edge constantly. Leah’s mother Sara (Denise Gough) is a scold, either dismissive or short with her young daughter. Leah’s dad is the village vicar (Steven Cree), and his church is one of those old ones you always find in horror movies. Even Leah’s older sister Bex (Hannah Rae) is an entitled brat, the kind who usually gets hers before the third reel.

Yet, despite those tropes, little of Platt’s story falls into such obviousness. And her direction is even slyer and more surprising. Take Platt’s use of jump scares in the film. Lots of surprises lurk out of the camera’s frame that will cause audiences to jump, but cleverly, those same moments make Leah jump too. Some are real, some are not, and many scares are just in her dreams. So much of it is just Leah’s imagination running wild, leaving her one seriously frazzled kid. And because her nerves get shredded, so do ours.

As the story builds, Leah starts to put two and two together about the supernatural occurrences, but even without them, she would still be a haunted child. That’s what makes this film special. Leah is already put-upon, and the new horrors she encounters are piling up on top of the other things disturbing her, like her unhappy home, the lies her parents are telling, and her abject loneliness.

MARTYR’S LANE is more of a psychological thriller than a horror film in many respects and a brilliantly atmospheric one at that. Platt does wonders with the settings, be it that old home that could give the one in Amityville a run for its money, or a lonesome country road that feels terrifying even in the daylight. Platt doesn’t overwrite any of the dialogue and she often lets long passages of action, accompanied only by silence, dominate the screen. In fact, the sound design, including a spare use of an underscore, makes this film stand far and apart from most horror entries.

Finally, Platt does two things in this film that demonstrate that she is a filmmaker to truly be reckoned with. Incredibly, she builds dread in every scene. Platt creates so much tension that even expository scenes come tethered to anxiety and a foreboding of danger. Secondly, Platt is a skilled director of children, getting one of the best performances in recent years out of the talented Thompson. Leah’s reactions to everything are the real story here and the performance is riveting from first moments to the last.

Some of the story’s conclusions aren’t all that surprising and it would be interesting to see a horror film take place in a location that didn’t feel so expected, but those are small quibbles for a frightener that works because Platt gets inside Leah’s head and ours. She works wonders on our psyche and makes this an exceptional filmgoing experience.

from The Establishing Shot https://ift.tt/3nI9AtX
via IFTTT