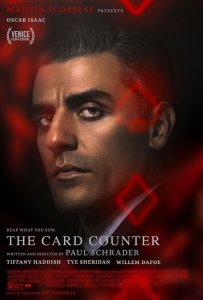 The mantle of masculinity has always been at the heart of Paul Schrader’s work and his unflinching examination of it has made him one of cinema’s most important filmmakers. He wrote TAXI DRIVER, co-wrote RAGING BULL, and has written and directed HARDCORE, AMERICAN GIGOLO, AFFLICTION, and FIRST REFORMED, just to name a few of his seminal films. Schrader’s new movie THE CARD COUNTER continues to examine what it means to be a man in America, specifically through an ex-military man’s guilt over Abu Ghraib. It’s a subtly nerve-wracking noir anchored by a brilliantly controlled Oscar Isaac in the lead.

Isaac plays William Tell, a lonely gambler who’s haunted by his part in torturing prisoners at Abu Ghraib, as well as the 8.5 years he served in prison to atone for those crimes. Tell now makes ends meet by traveling from casino to casino where he plays poker and counts cards, a foolproof system he picked up in the slammer. He makes just enough to live quite comfortably, but not too much to draw undue attention and get banned.

Tell tells us how his system works via voice-over narration, reading aloud what he’s writing in his journal. (Schrader used the same trick for Ethan Hawke’s priest character in FIRST REFORMED. It works just as well here.) Tell’s narration is slyly confident, as is his subtly masculine wardrobe of fitted suits, thin ties, and leather jackets. But there’s a lot of angst below the cool surface. Tell has trouble sleeping, his eyes have a perennial thousand-mile stare to them, and he obsessively covers motel furniture with his own sheets he travels with. It’s as if Tell feels so dirty that touching grungy motel bedspreads would send him over the edge. Soon enough, various events will indeed push him to such a precipice.

It starts with him discovering that his old Abu Ghraib commander Gordo (Willem Dafoe) is giving a speech about security at a local hotel. Tell was following Gordo’s orders in torturing prisoners, but while he did jail time, the C.O. walked away scot-free and now has a cushy job with a high-tech security company. The lure of danger only increases for Tell when Cirk (Tye Sheridan), the son of a fallen serviceman, tracks Tell down at the same hotel. He wants revenge on Gordo for ruining his father’s life and tries to enlist Tell to take part in his scheme as well.

Tell’s road to salvation is further infringed upon by a money-making offer from gambler’s rep La Linda (Tiffany Haddish). The confident young woman works as the front person for a company that sponsors high-end gamblers for a 50/50 split of any pot won. He’s attracted to her, and she to him, but will greed or revenge usurp him? As with all Schrader films, there are no easy answers to such queries, and that makes for a fascinating neo-noir here. How much will Tell gamble with his life? (How much will any of us?)

Isaac is masterful in this role, doing so much with stillness. You can’t take your eyes off him as the enigmatic lead. Sheridan and Dafoe do yeoman support work with very little screen time, exuding fire opposite Isaac’s ice. And the usually hilarious Haddish may be reigned in here, and not entirely comfortable playing it so straight, but she radiates decency and sensuality in equal doses.

Time was, back in the 70s, when Schrader was making a name for himself in the industry, that tight little potboilers like this were quite frequent. Today, it’s a miracle that there are such films made at all. If that makes Schrader “old school,” so be it. He’s making compelling cinema that puts an audience on the edge of its seat with nary a need for CGI or oversized set-pieces. And that’s the confidence of a man who knows what he’s doing. Here’s hoping he keeps making such vivid works.

from The Establishing Shot https://ift.tt/3BVniNK
via IFTTT