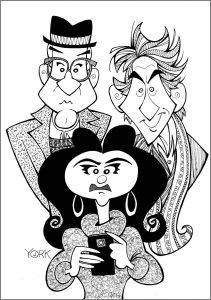 Original caricature by Jeff York of Steve Martin, Selena Gomez, and Martin Short in ONLY MURDERS IN THE BUILDING. (copyright 2021)

There’s an adage in Hollywood that every film is about two things: the plot, and the real story. The plot of SEVEN concerns a serial killer offing victims according to the Seven Deadly Sins. The story of SEVEN is about Morgan Freeman’s detective character coming back from the metaphorical dead. The old cop is a week away from retirement, nonplussed about it, and cynical about everything. Then, at the end of the film, when the detective discovers just what’s in the box, he loses his head, is snapped back to life, and genuinely starts to care about his partner and sticking around. The plot is the hook, but the real story is what gives the whole shebang its gravity and resonance.

Using that line of logic, ONLY MURDERS IN THE BUILDING isn’t just about three apartment dwellers investigating the mysterious death of their neighbor. That’s the plot, but the story is truly about the mysteries concerning each of the three amateur sleuths and ultimately, what their investigation will reveal about each of them. As a murder mystery, the new Hulu series that premiered on August 31, is slyly compelling, but as a study of the three sleuths, it is a captivating examination of loneliness, abandonment, and aging. It’s a fun mystery, for sure, but it’s an even better study of the human condition.

The official mystery starts when an unliked tenant named Tim Kono (Julian Cihi) is found dead in his tony apartment at the Arconia, one of the prestigious addresses on Manhattan’s Upper West Side. From surface appearances, it appears to be a suicide, but three true crime-obsessed residents think otherwise. They are Charles Haden-Savage (Steve Martin), a has-been actor, Oliver Putnam (Martin Short), a has-been theater director, and Mabel Mora (Selena Gomez), a young artist.

Together, the three begin putting two and two together. Kono didn’t act like a man at the end of his rope the day of his death: he transported a bag of garbage to a different floor, he was observed waiting urgently for a package, and he seemed to be as nattily dressed as ever.  That didn’t strike the three snoopers as evidence of a suicidal young man. An analogous death of a neighbor’s pet cat raised even more suspicions, as does the long list of people in the building who disliked Kono. Soon, Charles, Oliver, and Mabel are acting outside the law: breaking and entering, stealing mail, and bartering for documents about Kono’s complicated life to aid in their sleuthing.

But even more complicated than Kono’s past are the lives of the tree armchair detectives. Charles lies about his career and makes omelets in remembrance of some long-lost love. Oliver is hiding that he’s broke as he begs his estranged son for money. And it turns out that Mabel used to date Kono a decade ago and has a longer and more involved history in the building than anyone knows. Indeed, all three may be new BFFs, but what they don’t know about each other trumps what they do.

In just three episodes that dropped so far in the eight promised for the first season, the show seems to be full of secrets. In addition to both playing and satirizing whodunnits, the series does the same with all things New York City. It pokes fun at eccentric New Yorkers (the supporting cast is chock full of superb theater folks like Nathan Lane and Jackie Hoffman), Broadway musicals, detective shows of the 80s and 90s, and the faddishness of podcasts. Together, the three decide to chronicle their findings in a new podcast entitled, of course, Only Murders in the Building. Charles and Oliver may be way past their prime, but they’re still too in love with being celebrities to waste any opportunity to linger into the limelight.

That theme is where the true story of this series reveals itself as the septuagenarians feel forgotten and unappreciated, and the three in total feel as if life has left them in a certain limbo. The trio finds a renewed sense of purpose, even a sense of living, through the bizarre death of their neighbor. A third of the way into the run and the show seems to be as interested in the detectives as the detecting.

Martin conceived of the show with THIS IS US creator John Hoffman, and a knowing, humane voice is evident throughout. Every character is specific, vivid, and recognizably human. Additionally, the two bring elegance and economy to their storytelling, choosing a sly tone that blends cynicism and sentimentality. The show makes great use of the Big Apple locations too, infusing every scene with a New Yorker edge. Even the opening title sequence contributes to the Big Apple feeling, aping the font and cartooning style used in The New Yorker magazine.

Almost every character gets to display both verbal banter and physical schtick, too, clearly showing Martin’s influence as they are critical parts of his wheelhouse. As the aging actor, Martin gives a performance that is as dry as a martini, excelling as the straight man to Short’s more unleashed wild man. His Oliver is a ridiculously self-absorbed, snarky, and judgmental man of the theater, and yet Short makes this clown both believable and even pitiable. It’s his finest screenwork to date. And Gomez is a revelation, holding her own with the two legendary comics, and bringing a sexy edge to all of her bitter barbs. I never realized just how pitch-perfect her voice is to dispense brutal sarcasm as it does here.

I do wish that the three leads weren’t all playing artists. Martin could’ve played a conceited, old ad man or a retired business exec instead of a needy actor, and there’s a touch too much ‘show biz’ to the whole shebang. (Gomez, as good a singer as she is, shouldn’t get a singing scene in the show.) And so far, the show doesn’t have much tension. Charles and Mabel break into an apartment and there’s never any sense of getting caught in it. Still, the show has another five episodes to up such ante, and it likely will. The show’s very first moment shows Gomez covered in blood, hovering over a body before it flashes back two months early, so you know things will get violent too. Such dangers will only help better the series.

All in all, this is a clever start to a series that is, as Martin has said, a place for the smaller, gentler kinds of work that he used to make for the big screen like PARENTHOOD and FATHER OF THE BRIDE. Indeed, while more and more the cinema seems obsessive about either tent poles or Oscar bait, the smaller screen is where the in-between types of stories are being told, necessary stories like whodunnits, capers, and thrillers. Here, those investigating the whodunnit seem to be just as mysterious as the killer is. And, in doing so, Martin, Short, Gomez, et al. are positively slaying it.

from The Establishing Shot https://ift.tt/3ndCqlP
via IFTTT