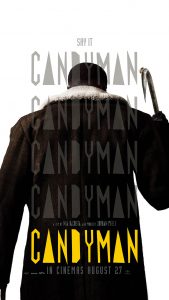 Few horror films before or since were as daring as 1992’s CANDYMAN, written and directed by Bernard Rose. In that movie, a young female grad student (Virginia Madsen) investigated an urban legend about an African American bogeyman dubbed “Candyman” (Tony Todd). Her journey took her from the hallowed halls of the University of Chicago to the dangerous projects of Cabrini Green. Along the way, she finds out that her subject is not only a ghost who is murdering residents, but his backstory is of an artist, a son of a slave, who was mutilated and murdered for having an affair with a white woman he painted shortly after the end of the Civil War. Rose’s film was well-received critically, became a cult classic, and over the years has seen its reputation grow exponentially. Additionally, the subjects of racism, white privilege, and retribution coursing through CANDYMAN have seen it come to be heralded as a shrewdly political film as well, one of the best of the last 30 years.

Not surprisingly, filmmaker Jordan Peele (GET OUT, US) has long been a fan of the titular work and his production company has rebooted the franchise which already spawned three sequels. CANDYMAN was originally slated to open last summer, but the pandemic thwarted its theatrical release. Now, it’s finally opening at the cineplexes across the nation today, and it couldn’t be timelier in the year after the murder of George Floyd and the ensuing Black Lives Matter protests. It’s also one hell of an artistic achievement, wisely building on the previous films rather than trying to remake them outright. CANDYMAN is not only great horror, but it’s one of 2021’s better films.

This new take, written by Peele, Win Rosenfeld, and Nia DaCosta, and directed by the latter, takes place in modern-day, and cleverly updates many of the conventions of the original piece. The setting is again the Windy City, and the ghostly hauntings remain on the land where Cabrini Green once stood. Those high-rises were torn down years ago, however, and now have been replaced by posh condominiums and businesses. One couple enjoying the lush life there are art gallery director Brianna Cartwright (Teyonah Parris) and her artist boyfriend Anthony McCoy (Yahya Abdul-Mateen II). Pressured to come up with new work for a gallery showing, Anthony becomes inspired by the story he hears about the urban legend of fellow artist Daniel Robitaille, AKA “Candyman.”

Anthony starts on a journey of historic discovery, but also one of self-discovery. The more he finds out about Candyman, the more the legend becomes a sort of muse to him. Anthony’s artistry is re-awakened, as is his anger at the African American experience in America. Contributing to his reawakening are frequent visits to some of the abandoned slums of the former projects that weren’t torn down, as well as stories of the continuing cycle of violence perpetrated on the black community in the city.

One such story involves a local one-armed man named Sherman Fields (Michael Hargrove), a suspected child molester and murderer who was beaten to death decades earlier by racist police. Urban legend has it that he was the reincarnation of Robitaille/Candyman, or at least, possessed by the spirit of the ghastly ghoul. With such influences upon him, Anthony’s paintings become darker, hugely political, and a triumph in the art world. But with that success comes obsession. Anthony imagines Candyman is after him, often finding him lurking in the reflections of mirrors, calling him out by name and beckoning him for more.

Just as in the previous films, the ghoul whose artist hand was cut-off by a racist mob, replaced with a hook, and slathered in honeycomb to attract killer bees, is summoned when you say “Candyman” five times in the mirror. That’s how Anthony calls him, as do a few others in the story who unwittingly set themselves up for doom. One set-piece finds a group of privileged teen girls doing the deed in their high school bathroom and DaCosta brilliantly leans on sound design more than visuals to convey the attack. Her direction gets props too for having cinematographer John Gulesarian shoot the most memorable scene in the film at the Marina Towers, albeit 100 feet away from the violence that occurs in one of its apartments.

Where DaCosta, et al. don’t succeed quite as well as in the original occurs on two fronts. First, while Abdul-Mateen and Parris are superb actors, their characters aren’t fleshed out nearly as well as Madsen’s Helen Lyle was in the original. Hers was one of horror’s best performances ever, as her character went from naïve, young woman to ambitious student to tormented psycho in a mere 101 minutes. Additionally, this reboot treats Candyman as more of an idea, a specter cycling through the ages more than the specific character of Robitaille. When the ghost is shown, he’s more of a shadowy, vague figure. In the original, Todd’s appearance 40 minutes in was a game-changer as he came to dominate much of the action with his purring baritone and tall, masculine presence.

The conceit here is that, indeed, Candyman is a black everyman, a victim of violence repeatedly perpetrated against the black community by the racist, white patriarchy year in and year out. That theme does give this film its incredible political resonance. Candyman is virtually George Floyd here, a victim who becomes the face of centuries of white abuse against the black community. Making Candyman more of a symbol than the person does, however, rob this version of a clearer and more definitive bogeyman character, distinct in face and body.

Nonetheless, the film makes up for it through its A+ production values and sublime acting. Colman Domingo is a particular stand-out in support as one of the project’s old-timers who explains the exposition with stirring authority. The rest of the supporting cast is first-rate too. And the score by Robert A. A. Lowe is gorgeously haunting. Lowe had big shoes to fill, having to compete with Philip Glass’s original CANDYMAN score, still a big seller today. One of the nicest touches in this CANDYMAN too is the puppetry animation sequences using a paper-cut-out motif, contributed by Manual Cinema. Those scenes are incredible, as elegant as they are searing.

In many ways, that is the perfect description for this reboot of CANDYMAN. It sears as it speaks truth to power, and it illuminates its horror themes with genuine artistry. Don’t miss it.

from The Establishing Shot https://ift.tt/3gCnKZo
via IFTTT