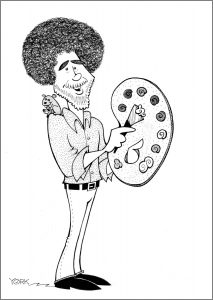 The marketing department at Netflix may have gotten a bit overzealous in trying to create a buzz around their new documentary BOB ROSS: HAPPY ACCIDENTS, BETRAYALS & GREED. Menacing music plays in the trailer while super-serious black and white still photos are shown, and a disembodied voice exclaims, “I’ve been wanting to get this story out for all these years.” Holy hell, there’s no way that the late PBS program host from the 1980s with the permed afro, gentle voice, and speedy painting style had a life as chilling as all that, is there? Of course not. This isn’t MAKING A MURDERER despite the ominous cues. It is, however, a fascinating and often disturbing portrait of how talented people become brands, and business types take no prisoners in building such brands. More importantly, however, this intriguing new film that premieres on the streaming platform August 25th paints a flattering portrait of the beloved artist and TV personality.

For those who may know Bob Ross only as one of those unintentional ASMR voices you can find on YouTube these days, he was the host of the wildly popular PBS series THE JOY OF PAINTING from 1983 to 1994. In a deft half-hour, Ross would introduce himself, list the colors on his palette, and then proceed to paint a rather impressive landscape in a mere 24 minutes. His technique was speedy and seemed simple, scraping and smushing his thick brushes and painting knives about. But upon his 18” x 24” canvas, slathered with a thin, even coat of Liquid White, Ross would create art that was adored the world over.

The documentary charts Ross’ rise from a 20-year Air Force veteran to an amateur painter to the TV personality to a phenomenon. (The doc includes a funny bit from the HBO series EUPHORIA where Maude Apatow’s teen character Lexi dresses up as Ross for Halloween.) Director Joshua Rofe and his team have gathered all sorts of intimate clips, photos, and interviews with Bob’s family, colleagues, and friends to showcase the artist, and Ross comes off as the genuine article in all of it. Essentially, what you saw was what you got with Ross. He was a prolific painter, a sweet man, and a lover of animals just as presented on his program week after week for over a decade.

One of the most entertaining parts of the doc comes when it examines Ross’s soothing voice and the charming effect it had on the opposite sex. The film suggests that Ross’s vocal delivery reminded women of a lover whispering pillow talk to them and that his largely female audience was in part due to such ‘seduction.’ The doc even goes so far as to suggest that his show’s title was a riff on Dr. Alex Comfort’s famous sex manual The Joy of Sex from the 1970s. Believe what you will, but that thought is hilarious. (Cue the gesso!)

Naturally, as Netflix docs tend to do, the film touches on scandal and renders some of  Ross’ life in the darker tones of phtalo blue and midnight black from his palette. It’s strongly suggested that Ross had an affair with his long-time producer and business manager Annette Kowalski while married to his second wife Jane. (Kowalski repeatedly denied an affair ever occurred.) Interviews with his painter son Steve Ross portray Bob as a man who could be moody and secretive too, and more than a bit arms’ length as a father.

The film misses out on some great Ross lore too. It doesn’t make much out of his chill demeanor to counter all those years of yelling in the air force. The doc also misses the opportunity to make more hay out of Bob’s fro, which was a permanent to save money on haircuts. And it doesn’t make nearly enough out of his pocket pal Peapod the Squirrel or all the other critters Ross fostered and featured on his show.

The film does make a very big deal, however, out of the scandalous events that occurred after Ross’ premature death at merely 52. Bob Ross Inc., the company named for him, was run by Annette and her husband Walt Kowalski and done so with an iron fist. They took charge of his entire empire upon his passing, arguing that virtually all that Ross had done in his lifetime was as a “work for hire” for them since they created his PBS show. The Kowalskis successfully argued in court that because of such, they owned the rights to his likeness, work, and empire. The battle for the control of Ross’s legacy makes up for the last third of the film, and indeed, it earns those eerie chords from the trailer.

Ross’s son Steve is the one whose voice was heard in that teaser, angry and anxious for the truth to come to light, and his story is very affecting. In many ways, this documentary is as much about his story as it is his father’s. If nothing else, the film plays as a cautionary tale about building brands, ruthless contracts, and greedy business partners.

But mostly, the film is a testament to the talent, integrity, and reputation of Bob Ross and most of his story manages to resonate as upbeat as all those “happy little trees” he painted over his lifetime. Ross may have believed that anyone could paint, but few could inspire, mesmerize, and demonstrate the joys of art like he could. Ross created a lot of delight and goodwill in the world, and no one can take that away from him or his legacy.

from The Establishing Shot https://ift.tt/3kgX5C9
via IFTTT