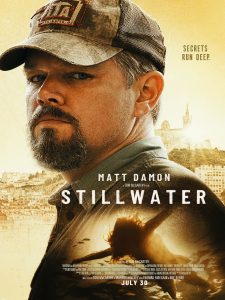 At first, I thought that the title STILLWATER felt strange for a film that spends most of its time in Marseilles, France. But as the story proceeds, the title is less about the Oklahoma hometown of a forlorn father trying to get his daughter out of prison overseas and more of a description of his character. He is a macho man who shows little emotion, but deep down has a tsunami of emotions he just cannot express. In other words, still waters run deep.

Matt Damon stars as that father, an oil worker named Bill Baker who’s living a mundane, blue-collar existence. He works, eats, and drops in regularly on his aging aunt Sharon (Deanna Dunagan). Bill, however, does have one element in his life that is anything but routine. He flies to Marseilles several times each year to visit his daughter Allison (Abigail Breslin) who has been serving time in prison for five years after being convicted of the murder of fellow student Lina. At the time, the two college students were both roommates and lovers.

Bill’s life is complicated even more by the fact that he and Allison have a strained relationship. His history of screwing up and abandonment left him estranged from Allison up until her arrest. His prison visits allow her to harangue him for his shortcomings, as well as plead for him to do what he can to persuade the French public defender to reopen the case. Bill tries but fails in his attempt to influence the lawyer, but he tells his daughter otherwise. He gives Allison false hope, and then to make things right, Bill starts his own amateur investigation to prove her innocence.

At that juncture, STILLWATER could’ve become a Southern-fried version of TAKEN even though Bill has no “particular set of skills.” All he has is stubborn tenacity and his belief that helping Allison clear her name will get him back in her good graces.

Slowly, but surely, Bill starts putting pieces of the puzzle together. He’s aided in his quest by a sympathetic, single mom he meets named Virginie (Camille Cottin). The Marseilles woman helps him overcome language barriers, as well as local geography. He returns the favor by looking after her sensitive, young daughter Maya (Lilo Siavaud) by taking her to school and babysitting while mom is away working as a theatrical actress.

It isn’t long before Bill completely immerses himself in their world, starting a “new family” with them to replace his damaged older one. At this point, the film veers strongly away from the thriller it’s been billed as becomes an out-and-out redemption story. Bill plays house with Virginie and Maya and finds happiness for the first time in his life, succeeding as a father figure for the first time. He cooks for them, plays games with Maya, and even trudges off the “thee-A-tor” to see Virginie perform. He may be a ‘fish out of water,’ but Bill digs the new pond.

Eventually, Bill’s attempts at playing both family man and intrepid sleuth will butt up against each other and the tension of how he manages the two is where most of the film’s tension is found. The more Bill blurs those lines, the more he backslides into his bad-boy behavior. It’s in these moments that Damon really shines, keeping Bill sympathetic even at his worst. Cottin plays well off Damon, essaying a maturing woman who can be sweet but tough too. Siavaud is a wonder, gives a completely unfettered performance that never feels like acting. And Breslin, miles away from anything she’s done before, makes her tough cookie daughter pitiable even when she’s being wholly belligerent.

As he did in SPOTLIGHT, director Tom McCarthy approaches everything so naturally, with no showy tricks or self-consciousness, that his fiction at times almost feels like a documentary. Masanobu Takayanagi’s camera roams all over Marseilles and handles the complicated location work incredibly well. McCarthy and his fellow screenwriters Marcus Hinchey, Thomas Bidegain, and Noe Debre don’t overwrite a single scene either, ensuring that their dialogue is economical and the action is tight.

However, writing a narrative borrowing so liberally from the infamous case of Meredith Kercher’s 2007 murder in Italy was a bad idea. The film unwittingly suggests that Allison is like Amanda Knox, the wrongfully imprisoned American student, and the comparison does the real-life innocent no favors. A crime farther afield could’ve worked just as easily in the story. Knox has gone on the record protesting the film and her rage at how McCarthy, et al. muddy the waters of her case is legitimate.

Still, the film succeeds as a character study of a man desperately trying to turn his life around. At times, STILLWATER reminded me of 70’s movies like THE PARALLAX VIEW and HARDCORE where the protagonist was not prepared for what he’d find in his quest for justice. This film isn’t quite as unsettling as those, but it does make for a disturbing and affecting cinematic experience.

from The Establishing Shot https://ift.tt/3l91FEJ
via IFTTT