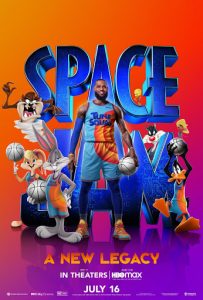 How did the new animated film SPACE JAM: A NEW LEGACY end up so misguided? Following the formula of the 1996 hit SPACE JAM starring Michael Jordan playing basketball with Bugs Bunny and the classic stable of Loony Tune characters should have been easy for any screenwriter, yet six different scribes are listed as responsible for this miscalculation of a movie.

Indeed, at every virtually every juncture, this film makes a baffling decision that makes you wonder how such wrong turns were approved. Clearly, someone grossly misunderstood what makes basketball star LeBron James so appealing. They also failed to comprehend the incredible personalities of WB’s classic cartoon characters, what makes for interesting villains, or the difference between G-rated and R-rated fare from the studio’s vaulted catalog.

Let me chronicle the most egregious of these mistakes in what is supposed to be a family film:

1.) James, the star of the film, and one of the most affable athletes in the world, is assigned to play an obstinate and joyless version of himself here. As written, he berates his kids, particularly computer nerd Dom (Cedric Joe) for not loving basketball like he does and mopes about it over the course of the entire story.

2.) The film takes a full 30 minutes before it introduces Bugs Bunny and his cartoon buddies, and the total screen time is almost a full two hours, a very long sit for any child under eight years of age.

3.) The computerized A.I. villain (Don Cheadle) and his algorithm scheme are way too complex for a kid’s film, requiring the character to explain just what the heck is going on in his nefarious scheme at virtually every major point of it.

4.) The cartoon characters are given short shrift or misinterpreted. Gossamer, Elmer Fudd, and Lola Bunny barely register at all in the film. (Zendaya does a good job voicing Lola, but the character is woefully underwritten.) Additionally, the new villain characters on the Goon Squad, the bad guys’ basketball team, are under-developed too and given almost no dialogue.

5.) Certain cartoons are shamefully rewritten such as Granny who is turned into an oversexed hottie here guzzling martinis courtside. That reimagining is clearly aimed at the parents in the audience, but I pity them having to explain to their kids why Grandma is such a floozie.

6.) Rather than just revel in the WB cartoon history, the film feels the need to trot out characters and spoofs from dozens of other Warner IPs, everything from CASABLANCA to SUPERMAN to THE MATRIX, including a lot of R-rated fare.

7.) And speaking of R-rated fare, whose awful decision was it to have amongst the courtside fans cheering on the big basketball game such horrible characters as the Droogs from A CLOCKWORK ORANGE and Pennywise the Clown from IT? (Rapists and killers, that’s who should be positioned so prominently there?)

8.) Additionally, all of those in the crowd are over-directed, acting especially zealous even when the story doesn’t call for it. (They shouldn’t be cheering each play as if it’s a game-winning basket.) The casting and costuming of those extras are atrocious too. They are clearly inexperienced actors overdoing their physical impressions of characters like Arnold Schwarzenegger’s Mr. Freeze from WB’s BATMAN & ROBIN and the zombie-like Walkers from GAME OF THRONES. Their get-ups look ridiculously cheap as well like they’re from one of those Halloween Spirit stores that pop up every October. All in all, these vamping extras come off like the untalented drabble working the Walk of Fame along Hollywood and Vine.

I could go on and on about such blunders, especially when much of the film plays like a commercial for all of WB’s impressive properties. I counted at least three prominent spoofs of the HARRY POTTER films, but what does any of that have to do with Bugs Bunny? He’s not given enough screen time either, and he doesn’t interact a lick with the likes of cartoon colleagues like the Flintstones, the Jetsons, or the Scooby-Doo gang. Those characters show up to watch the big game but are given little more than glorified cameos to play. Meanwhile, the menacing Droogs and Walkers appear in dozens of shots.

Director Malcolm D. Lee gets good performances out of James, Cheadle, and Joe, and there is enough eye-popping color, action, and razzle-dazzle to amuse most of the kids who’ll show up at the Cineplex. There are some very good laughs in the story too, and the world-building looks fantastical throughout. Kudos to the special effects team for blending the live-action actors seamlessly into the cartoon backgrounds and for turning the 2-D cartoon characters turn into believable 3-D ones.

Lee also delivers one of the best laughs in a film this year, a hilarious cameo at the beginning of the third act. I missed a few lines of dialogue after his introduction due to laughing so hard. Still, it’s not enough to balance out all those commercially calculated cameos throughout the rest of the film whose main purpose seems to remind movie audiences of the vastness of the Warner Bros. stable of properties.

This film should’ve been easy, goofy fun, trading on James’s showmanship, blended in with the Loony Tunes family strutting their stuff. Instead, this film finds all sorts of ways to be morose, bloated, and baffling. Oh, brothers.

from The Establishing Shot https://ift.tt/2URagR9
via IFTTT