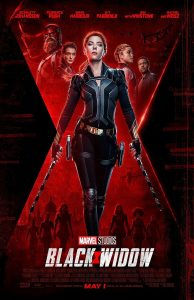 The new actioner BLACK WIDOW, opening July 9, boasts a superb cast consisting of Scarlett Johansson, Florence Pugh, Rachel Weisz, David Harbour, and Ray Winstone. The film’s director is Cate Shortland, and she crafts the film with great care and attention to detail. Additionally, the production design boasts all the highwater marks that we’ve come to expect from the Marvel Cinematic Universe, especially when it comes to state-of-the-art CGI. So, with all that going for it, why does the MCU’s 24th film seem so inconsequential?  There are several reasons, starting with the fact that we are asked to invest in the backstory of the Natasha Romanova character (Johansson) that should’ve been filmed years ago. It also doesn’t help that the character died heroically in AVENGERS: END GAME two years ago.

The film’s truer existence is likely to serve as the set-up for the next Black Widow character – Pugh’s Yelena Bolava – who’ll be taking over the franchise, but that could’ve been done in many ways other than this film. Thus, it’s a story about Natasha’s past that strains throughout to be meaningful and relevant.

Another problem the film has is the producers’ decision to invest not wholly in her backstory, but a semi-one. Sure, it starts with Natasha’s childhood but then fast-forwards twenty years into the 21st century.  The time period takes place when the character took a break from the Avengers after the fallout from the storyline in 2016’s CAPTAIN AMERICA: CIVIL WAR, just five years ago. Some backstory.

Thus, the film gives her a mission that should’ve occurred after she was introduced in IRON MAN 2. Natasha is out to take down the Red Room, the covert Soviet agency that turned her and Yelena into trained killers. Such an idea might have lent itself to a genuine spy thriller, packed with engaging espionage in a fun, James Bond, Cold War sort of way. Instead, the film chooses a dour approach, with the plot reveling in despair and ruined lives.  Even with a scene-stealing Pugh along for the ride, tossing off snide asides with the grace of Groucho, the film is a downer.

Natasha and Yelena fight their way through set piece after set piece, narrowly evading other Black Widows and goons from the agency trying to stop their two rogue agents. It’s a lot of punches, kicks, and body blows along the way, and it’s unsettling to see the two female characters continually taking a beating. They do get back up each time to continue their trek, but there’s something ugly about a movie’s argument for female empowerment delivered within such a gauntlet of physical abuse.

When the film isn’t tossing its two leads around like rag dolls, they spend a lot of time carping at each other, or their ‘parents’ whom they pick up along the way of their journey. They rescue their gone-to-seed ‘father’ Alexei Shostakov (Harbour) from a Russian gulag via sputtering helicopter in one of the film’s better set-pieces. (His falling out with Dreykov (Winstone), the head of the Red Room, led to his unlawful imprisonment.) And the three of them discover the hiding place of ‘mother’ Melina Vostakov (Weisz) shortly after. She’s now training pigs as part of a government experiment in mind control, and Melina’s got these hogs opening doors and acting like family pets. This ‘guinea pig’ joke is one of the cheekier ones in the film.

But as the four spend time together in Melina’s dark and cluttered farmhouse for a good 30 minutes, trying to act like family, the film all but screeches to a halt. They drink vodka, carp at each other, and complain of their lousy lots in life. Are we having fun yet? I wasn’t.

It all culminates when they confront Dreykov at his Dr. Evil-esque lair in a ridiculously elaborate tower somewhere in the Siberian mountains.  Johansson, et al. give it their all, but the performances get drowned out by the property-destroying finale. After all the MCU success, and the new bars being set by the Marvel TV series WANDA VISION, THE FALCON AND THE WINTER SOLDIER and LOKI, this film feels like a big step backward. And in telling the tale of a deceased character, one of the few that stayed dead in the MCU, it truly is just that.

from The Establishing Shot https://ift.tt/3dHmp1D
via IFTTT