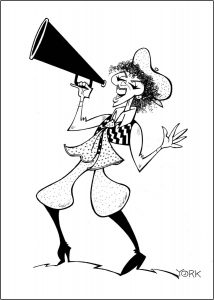 Original caricature by Jeff York of Rita Moreno (playing a character in “The Electric Company”) in the documentary RITA MORENO: JUST A GIRL WHO DECIDED TO GO FOR IT (copyright 2021)

Rita Moreno’s fascinating life of 89 years has been so full of work, acclaim, love, barrier-breaking, and longevity, it probably deserves a limited series more than a documentary. Still, if you’re going to do a documentary on the legendary actress, RITA MORENO: JUST A GIRL WHO DECIDED TO GO FOR IT manages to do an excellent job in a scant 90 minutes. It gives us insight into her career, her personal life, and some delicious Hollywood tea being poured by the woman herself. It’s a hoot and a holler, but it’s also one woman’s cautionary tale about the sexism and racism that curdles through Tinsel Town.

The film opens today in theaters and hits all the high notes of Moreno’s storied career. Featured prominently are her early roles in musicals like SINGIN’ IN THE RAIN and THE KING & I, her Oscar-winning turn in WEST SIDE STORY, and the edgier roles she’s played in the last few decades as she aged spectacularly well into her 70s and 80s. (Frankly, she doesn’t look a day over 65.) Amongst her vaulted work of the last few decades is her straight turn as a nun counseling prisoners in HBO’s drama OZ. Moreno tells about all of those acting experiences in great detail, detailing specific aspects of each production, as well as the politics of getting the roles. The ingenue faced many issues still thwarting young actresses of color today including typecasting, exclusion, and being treated as a piece of meat. Some of her stories are hilarious, others harrowing.

Her vast resume is such that the doc cannot possibly cover it all as adequately as one wishes. The film leaves out significant chunks of her work, or short shrifts important parts like her time on THE ELECTRIC COMPANY in the 1970s. The six years she contributed to that program get only a few minutes of screen time. That’s a shame as the wide variety of roles she played during her run on the program were in many ways akin to repertoire theater. Moreno herself says her time on that PBS kids classic was the happiest time of her life due to the fun of the work coinciding with a happy home life for once in her life.

What the film here gets wholly right though is turning to the woman herself for most of the interest. Moreno’s own words shape every event, every part of the film. She shares incredibly intimate secrets and delights in spilling some of the best tea this side of a gossip show on E! Moreno also tells a lot about her personal life, both triumphant and tragic, and she doesn’t hold in being bold.  Moreno tells her remembrances straight to the camera too, giving it all a one-on-one intimacy with the viewer.

The most interesting part of the documentary is when Moreno talks about dating Marlon Brando of and off for 8 years. Theirs was a cautionary tale about obsession, animal magnetism, ego, and the dangers of mixing work and pleasure. The details she drops are jaw-droppers, yet she tells every beat of the story with clear eyes, her steady voice, and a knowingness of how it affected her.

The film is also an immigrant’s story, a feminist’s story, as well as a study in career reinvention, overcoming ageism, and learning to revel in the big and small victories. Moreno can come off as a bit brusque at times, even self-pitying. As the film begins she’s throwing herself an 87th birthday party because she says she’s not a big enough star for anyone to throw one for her. But she’s allowed some bitterness as she hasn’t had as huge a career as her talent should have dictated. Still, she’s been given a lifetime achievement award by SAG and the Kennedy Center Honors, and she is one of the earliest performers to earn an Emmy, Grammy, Oscar, and Tony (the famed and ever-so-rare EGOT) in competition.

Mostly, what comes through in her almost 90 years on this earth, are example after example of pluck and heroism. She embraced her Latino heritage in Hollywood even though big stars like Rita Hayworth hid hers. Moreno stood up to agents, scoundrels, directors, and chauvinist pigs throughout the decades too. Additionally, her wry sense of humor is there whether she was eight or 80. One of her best stories concerns coming to America and interpreting the Statue of Liberty as an elegant woman holding a big ice cream cone. What a wonderful welcome to an impressionable young girl escaping Puerto Rico for better opportunities in the United States.

The documentary’s director Mariem Perez Riera also gets great anecdotes from a vast array of celebrities who’ve worked with Moreno. Norman Lear talks about Moreno’s comedy talents and fighting for Latino voices. Everyone from Hector Elizondo to Eva Longoria to Lin-Manuel Miranda discusses how Moreno helped open doors for them. And various costars like George Chakiris and B.D. Wong talk about her professionalism, enthusiasm, and warmth on set.

Today, it doesn’t seem as if Moreno is slowing down any. She’s been outspoken this week about some controversy surrounding representation in the new movie musical IN THE HEIGHTS. And she is an executive producer of Steven Spielberg’s remake of WEST SIDE STORY that’s due this Christmas. (She’s also starring in it.) That film will likely be quite a gift to cinemagoers this Christmas. As is this one, in theaters right now.

from The Establishing Shot https://ift.tt/2TGpoAq
via IFTTT