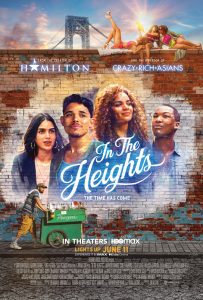 I’m late to the dance in reviewing the wonderful new movie musical IN THE HEIGHTS. (Actually, it’s more like a block party.) Suffice it to say, I did catch it this past weekend on the big screen and found the film to be exhilarating, inspiring, and done as well as any musical done in the past 20 years. In fact, outside of the filmed version of HAIRSPRAY, I can think of no better transfer from Broadway to the big screen since CABARET in 1972.

There are several factors that contribute to the film being a marvel, not to mention a minor miracle. For starters, they’ve not overdone the transfer with excessive cutting and too much bombast as CHICAGO did in 2002. They also didn’t stuff the film with name stars as LES MISERABLES did in 2012, stars that didn’t quite work in their roles. (Russell Crowe, anyone?) Finally, IN THE HEIGHTS has a director in Jon M. Chu who understands musicals, what can and cannot be done on the big screen, and what the core idea is within the story. IN THE HEIGHTS is about community and there hasn’t been a better use of large casts, dancing extras, locations and inspired choreography on film since 1968’s OLIVER took Best Picture at the Oscars. (You’ll remember that Onna White was awarded a special award for the incredible numbers she choreographed throughout the film.)

That’s not to say that IN THE HEIGHTS doesn’t have some recognizable faces (Jimmy Smits, Daphne Rubin-Vega) or star turns (Anthony Ramos, Leslie Grace, Melissa Barrera, and Corey Hawkins), but none of them outshine the fact that in almost every scene, the neighborhood and residents of Washington Heights are in focus. Each of the characters played by the actors I listed have arcs, but none of them eclipse the entirety of the piece and the transformation of the community throughout the storytelling.

The story starts with Usnavi (Ramos), a humble bodega owner telling a group of kids about his story on a tropical island’s beach. Is it in the Dominican Republic, where Usnavi’s late father hailed from and established his beachfront shop? Director Chu teases us with his narrator’s cleverness in how he tells his story, but soon enough, the film flashes back to the week when the neighborhood was in a tizzy because of the summer heat, a citywide blackout, and a winning lottery ticket that happened to come from Usnavi’s store.

Who won the ticket? What will Usnavi do with his share of the money that the store that sold it gets rewarded with? And how will all these events affect the everyday lives of all the inhabitants of Washington Heights? The answers will get complicated, of course, as musicals must, and it is delightful to see just how the individual stories overlap and interconnect with each other.

Nina (Leslie Grace) has dropped out of Stanford even though her proud father Kevin (Smits) pinned his hopes on her making more of herself by leaving the modest neighborhood behind. Additionally, her boyfriend Benny (Corey Hawkins) works for Kevin’s car service, which is about to be sold. Usnavi pines for Vanessa (Barrera), though their relationship moves and stalls in fits and starts. The local salon run by Daniela (Rubin-Vega) is moving to the Bronx because of rent increases. Even the local Piragüero (Lin-Manuela Miranda) has problems as he’s losing more and more of his shaved ice confection business to a Mister Softee truck. It’s a film for our times, reflecting our nation’s economic despairs woven into everyone’s lives by the pandemic, even though the original show was written a decade ago and this film was lensed a couple of years back. (It was in the can for over a year, waiting release due to COVID-19 shuttering movie theaters.)

The fact that each of the character’s stories is given great time and attention in the film, let alone songs, just as they were on the stage, shows that Chu and screenwriter Quiara Alegría Hudes, adapting her book from the original musical, have faithfully preserved the material. Yet, this film never feels “stagey.” Instead, Chu heightens it all with his knowing use of close-ups, editing, and camera focus. (Alice Brooks’ cinematography is oh-so award-worthy.) Chu’s film ebbs and flows yet never loses energy. There is exuberance in the group dance numbers and intimacy in the solo numbers. Yet, even within those star numbers, the actors are often singing with all kinds of city activity behind them. The choreography is wondrous in the big dance numbers and in how the supporting players and extras move about in the background of all the scenes throughout.

The cast is first-rate across the board with Olga Merediz a standout as Abuela Claudia, the matriarch of the neighborhood and the woman who raised Usnavi. Everyone can sing well, play both the comedy and drama equally, and keep up with Miranda’s intricate internal rhyme schemes throughout his raps. Miranda achieved worldwide acclaim for the Broadway version in 2008, with all his songs written and sung as rap, something he did again on stage a few years later in the phenomenon that was HAMILTON.

Perhaps the standout scene in the movie is an all-hands-on-deck number at the community pool where the news of the winning lottery ticket spreads like wildfire amongst the swimmers. They all fantasize about what they’d do with the winnings, and it plays like an Esther Williams movie for MGM in the Fifties, albeit one with literally hundreds of extras all moving in and out of the pool in synchronized splendor.  You have to see it to believe it!

There are a few quibbles I could make within the film’s execution. It feels a touch long and perhaps a song or two might’ve been cut to keep things even breezier. Both of the strong female leads are impossibly gorgeous and dressed for maximum glamour throughout the humble neighborhood story. And some of the turns in the narrative are quite predictable, but the film manages to make the most of such cliches by either milking them for maximum effect or not belaboring them. The ‘feels’ are there, but they never turn maudlin.

Yet, for those minor complaints, the virtues of the film make up for them ten-fold. The rich main characters, Ramos’ charming bravado, the through-lines that make any movement or action easy to follow, the colorful costumes and authentic, and the on-location settings all will knock your socks off. And the integration of all of them into the story and the physicality of the community as a place and a people is as effective as all the contemporary wordplay that Miranda wrote with such relish.

Few musicals on film these days reach the heights that can be found here. IN THE HEIGHTS can stand with the best of Hollywood’s Broadway musical adaptations, as well as sing and dance with them. It’s one helluva show.

from The Establishing Shot https://ift.tt/2SEr3WS
via IFTTT