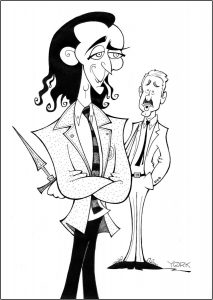 Chalk up another success for the Marvel Cinematic Universe with the premiere of LOKI, their latest limited series that just started on Disney+. Starring Tom Hiddleston and Owen Wilson, the six-episode run promises all the things you’d expect from the MCU: exciting action, wicked wit, and well-developed characters. And its premiere showcases two distinct attributes as well. It is clearly a set-up for the multiverse storyline that will soon stitch most of the various parts of the overall MCU franchise together. Additionally, the first episode suggests a surprising layer of seriousness, something heretofore only hinted at in the exploration of the Loki character.

When Loki was last seen in the MCU, he suffered a humiliating death at the hands of Thanos in the film AVENGERS: INFINITY WAR but was given new life when he managed to escape with the vaulted Tesseract in a time-travel flashback scene that was one of the juicier highlights of the follow-up film AVENGERS: ENDGAME. The comical villain Loki was too good a character to keep down for too long, and indeed, this series picks up just after he’s escaped imprisonment with the glowing blue cube as his transport to anywhere in the Universe that he dares to travel.

But like so much of the MCU, that plot point is short-lived as the filmmakers here are after something more unexpected and even deeper. Loki is almost immediately recaptured by authorities, only this time it’s not the US Feds but a galaxy-hopping patrol agency called the Time Variance Authority (TVA). Not only is it funny that Loki is thwarted before he can even get his bearings in the new desert landscape he’s popped into, but one of the better laughs is how the TVA then is showcased as a government agency full of both strict military types and officious DMV-type workers. Jackboots and clip-on ties, juxtaposed for fun and froth.

As he’s paraded through custody at the TVA, drably decorated in browns and muddy oranges, he encounters one bored, seen-it-all bureaucrat after another. Loki is furious that he’s being treated like just another customer in line, bellowing about how he’s a god and they should bow down before him. Not only do the nonplussed agency workers ignore his ranting, but they push him around like a rag doll. Hiddleston handles the physical comedy of being shoved, dropped, or bullied from one room to the next with the aplomb of a silent film comedian, and his vocal bluster recalls everyone from Edward Arnold to Terry Thomas. It’s a richly comic performance, given full power here as he holds center stage.

The comedy is furthered when Owen Wilson shows up as the droll agent who’s going to handle his case, one Mobius M. Mobius. (Mobius, as in Mobius Strip, the twisting one surface entity that makes for a perfect metaphor of time travel folding in on itself.) His hair shortened, and grayed, with a full mustache, Wilson plays the character as a wizened veteran of the government who is two steps ahead of any perp, included the supposed heir of Asgard and ‘god of mischief.’

Their banter back and forth, as Mobius explains time travel to Loki and how the universe has split into all forms of a multiverse that need to be straightened out, is both hilarious and expert exposition. Not only does Mobius catch fans up to speed on the conceit that MCU has been hanging its hat on for some time now, but also in familiarizing new viewers with just who Loki is and why he’s both fiend and foul-up.

Hiddleston and Wilson make for a terrific ‘odd couple,’ both playing foils to the hilt as well as alternating being fool and straight man. But here is where the MCU continues to delve deeper. As Loki’s history is shown, such flashbacks portray a lost soul and a loser, one who is forced to confess that all his bravado is the armor of an insecure and afraid little man. (Even his stunt as D.B. Cooper turns out to be little more than a bet with his brother Thor.) It’s a sad comedown for the character, with the bureaucrat showing surprising sympathy. Both Hiddleston and Wilson hit such serious notes as effectively as they do the comedic ones, promising something far more thought-provoking for the series. It may turn out to be a time-travel buddy picture as they attempt to correct Loki’s mistakes in his past and future throughout the galaxy, but it seems to promise a deeper exploration of man and god.

There are many other pleasures to be found at the start of this show. The supporting cast, including Gugu Mbatha-Raw as Ravonna Renslayer, a former hunter of criminal time-travel miscreants like Loki, now a sympathetic judge, and Wunmi Mosaku as Hunter B-15, who has little time for such villainous variants as him, is excellent across the board.

And while the MCU has come to be known for its vulnerable and three-dimensional characters, ever-twisting plots, crossovers, and overlapping storylines, one must applaud executive producer Kevin Feige for constantly surprising us within expectations. The MCU always zigs as much as it zags, and with its foray into television, the storytelling has broadened exponentially and even expanded what a miniseries can do. Their shows not only play as long-form films, filled with superb production values, but as an interlocking narrative that begs each series to be watched in tandem with the others.

And the intellectual rigor required in viewing them far belies what anyone would expect from comic book origins. WANDAVISION played like a cross between THE TRUMAN SHOW and THREE COLORS: BLUE. THE FALCON AND THE WINTER SOLDIER was as much a tale about racism as PTSD. Now, with LOKI, the MCU seems to be going for THE ODD COUPLE by way of ETERNAL SUNSHINE OF THE SPOTLESS MIND. Such mix-ins make for involving, unpredictable narratives, as much character studies as dissertations on society. It’s hardly kids’ stuff.

from The Establishing Shot https://ift.tt/3ze4Dwl
via IFTTT