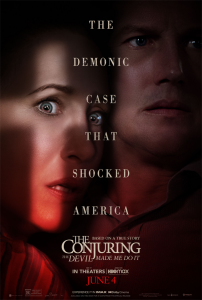 There is a fine line between macabre humor and kitsch in horror. Vincent Price managed to avoid crossing the line more often than not in his career. Eli Roth, not so much. THE CONJURING franchise, when it hasn’t focused on paranormal investigators Ed and Lorraine Warren (Patrick Wilson and Vera Farmiga), has unfortunately danced too close to the tawdry. While there were pleasures to be found in the three ANNABELLE offshoots, the frights more and more started to resemble schtick. By the time THE NUN appeared on the big screen, too much of the eeriness of the Warrens’ real-life adventures were replaced by cheap jump scares and over-the-top stylization. Now, this third film, focusing exclusively on the Warrens, has been painted with the same kitschy brush. It’s a ghastly look.

The problem starts with the new film’s title. THE CONJURING: THE DEVIL MADE ME DO IT is not a worthy moniker for the Warren portfolio. It sounds silly and doesn’t conjure up fear, but rather the tagline of Flip Wilson’s “Geraldine” character from the 1960s. The ribald character blamed all of her sins on Satan. This film has director Michael Chaves and screenwriter David Leslie Johnson-McGoldrick to point the finger at.

There was an opportunity for them to treat the demonic possession of a young boy straight, and mine it for pathos as well as terror, but everything they do in the first 15 minutes of the film borders on either the absurd or parody. The priest (Steve Coulter) arrives in a pose so close to Max von Sydow’s in the iconic poster for THE EXORCIST, that it plays as cheap, an overly self-conscious riff. The exorcism itself is dialed up to an 11 from the get-go with nowhere to retreat into except hysterical acting and deafening sound design. Heart attacks, visions, bloody showerheads, demonic contact lenses – they all follow suit in mere minutes. Is this a serious horror film or an attempt to resuscitate the SCARY MOVIE series?

From there, everything continues to be painted too broadly, written too obviously, and played too badly. Ed has a heart attack during the exorcism but is soon running all over hill and dale like nothing can slow him down. Arne Cheyenne Johnson (Ruari O’Connor) is now possessed by the same demon as the boy but is too oblivious to question anomalies all around him. He sees a rat upend a box of cereal and retreat into a new hole in the living room wall five feet off the ground but thinks nothing of sticking his eyeball into the hole to investigate. And too many scares are undercut by Chave’s unfortunate 80s playlist he employs to give the frights irony. It adds more than that, it makes them laughable.

Wilson and Farmiga give it their all per usual, but even they get swallowed up in the goofy script. They attempt to play absurd fantasy sequences with a level of realism, but Chaves leaves them flailing. Bruno (Ronnie Gene Blevins), a loathsome colleague of Arne’s registers as more of a caricature than a character in his three minutes of screen time, and his subsequent slaughter is greeted as comic relief rather than as a chilling first murder. Chaves can’t help but show his immaturity by having Father Kastner (John Noble), a sinister supporting character, introduced uttering the line to the Warrens, “I have chicken shit all over my hands.”

It might be time for the filmmakers behind THE CONJURING franchise, especially its first writer/director and current executive producer James Wan, to reconsider its future and how the storytelling is being approached. It was rather amusing watching the demonic Nun casually appear at the end of the hallway in her film, or witness Annabelle show up in places a doll couldn’t possibly make it to in her films. Audiences laughed nervously at such bits and they didn’t overwhelm the material. But this new tale has far too much schtick that smacks of desperation as if the filmmakers didn’t have any faith in the Warrens. The amount of ludicrous jump scares that even the casual horror fan can see coming a mile away is a testament to the frivolity that’s now crept wholly into the franchise.

The Warrens spent their whole lives not only fighting the supernatural but religious and political leaders who decried their earnestness. This series seems to have now mostly forgotten such truths, instead choosing to push the Warren stories to cartoonish extremes. There’s too much gravy in the current concoction and not nearly enough grave.

from The Establishing Shot https://ift.tt/2RlXxVt
via IFTTT