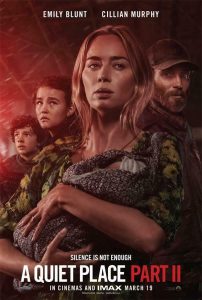 Any horror film that’s even halfway successful at the box office these days becomes a franchise, and 2018’s A QUIET PLACE is no exception. Its deftly told tale not only made plenty of bucks at the box office, but its critical hosannas resulted in a SAG Award for star Emily Blunt. She’s back, as is the core cast from the first film, for the inevitable sequel A QUIET PLACE, PART II. Most such films would opt to merely plop a 2 after the title, but writer/director John Krasinski clearly had a classier sequel in mind. He delivers a character-driven piece, better than most follow-ups in the genre, and more than earns the right to put the more elegant and worthy Roman numeral on his moniker.

Whether the film truly needed a sequel is open for debate. And if a sequel was going to be explored, it might have been more interesting to showcase more of the origins of the alien invasion or how others in various parts of the world were surviving in the aftermath. Instead, Krasinski focuses on the intriguing Abbott family he created in the first film with screenwriters Bryan Woods and Scott Beck. It’s wholly expected, but the family never wears out its welcome.

The Abbott clan is fatherless after Papa (Krasinski) bit the dust in the first film.  On their own now are mom Evelyn (Emily Blunt), her new infant, and teen daughter Regan (Millicent Simmonds), and teen son Marcus (Noah Jupe). Their story picks up quickly where the original film left off, although this movie starts with a quick flashback to when the Abbotts’ small town was first invaded. (Yes folks, that’s how you get Krasinski back in front of the camera!)

The four trudge down the road with their property on fire behind them. They’re all barefoot, all but tip-t0eing as quietly as they can to not rouse the alien invaders’ hyper-sensitive hearing. Not long after, however, Marcus walks into a bear trap that’s been outside a deserted mill. Naturally, he howls in pain and cannot help but ring the dinner bell for one of those nasty creatures. A clever chase ensues with the Abbotts barely making it to safety inside the dilapidated structure. Emmett (Cillian Murphy), a local, rescues them in the nick of time by hiding them in the level below the plant.

Emmett’s become quite the survivalist, tricking out the basement with furniture, beds, and plenty of food and weapons. Naturally, the Abbotts want to stay, but the ornery coot declines their request. Of course, he’ll have a change of heart and that comes when the courageous Regan ventures out to seek help. Soon enough, Emmett is chasing after the deft teen, while Evelyn heads out to get medical supplies to dress Marcus’ wound.

This is where Krasinski makes his boldest choices as a writer and his most skilled moves as a director. He essentially splits the story into three parts with the whole family never to be reunited for the rest of the film. It’s a daring move to break the narrative into thirds, but he uses cross-cutting in his narrative and editing to show that he’s a significant triple threat. He wisely eschews a lot of the familiar to showcase three unique narratives, especially the one with Markus left in charge of the baby. The three-way split also showcases each of the main actors to a great advantage. We don’t need to see too much of the aliens, but we want to see what’s flashing across the faces of these characters during their individual “hero journeys.”

Simmonds and Jupe are terrific young actors and more than hold their own in their storylines. Of course, Blunt is incredible, portraying a mix of steeliness and vulnerability better than any actress who is working today. Simmonds also gets the great opportunity to play off a very game Murphy. He shrewdly underplays his part and subtly shows his growing warmth towards her. Krasinski throws all kinds of obstacles at them in their journey, from an alien attack in a deserted train car to a rollicking fight with marauders at a boating dock.

Much of the novelty of the first film has worn off, of course, and even the aliens and their Venus Flytrap mouths and ear cavities seem less terrifying here. And even though the tropes of the exceedingly quiet soundtrack are utilized to great advantage in this sequel, it’s the simple focus on the main characters’ reactions to everything that gives it the similar power as its predecessor.

It’s like Norma Desmond said in SUNSET BOULEVARD when she boasted about how silent films didn’t need dialogue. “We had faces!” she exclaimed. That’s true here as well as Krasinski knows it. Horror works best when we care about the characters and watching all the horrors they experience etched on their expressive faces is the whole enchilada. Those faces work wonders here again and will likely sustain future sequels.

I just hope the next outing showcases how others in the world are dealing with their alien overlords. Did the President of the United States make it to his bunker in time before seeing his cabinet turned into mincemeat by those nasty beasts? How are cities functioning? Was there any military response? And do car alarms irritate the aliens as much as the rest of us? It would seem there is still plenty to explore in the franchise, no?

from The Establishing Shot https://ift.tt/3uyiqdo
via IFTTT