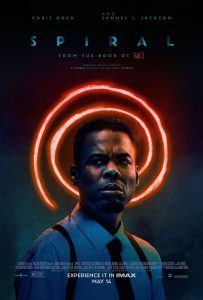 The makers of the SAW franchise continue to forget what their property is about, failing to understand that what made the first and only sublime entry in the series so effective was dread, not gore. Instead, no matter what director or screenwriter they bring back, the challenge seems to be who can create the most disgusting, bloodletting contraption to kill someone within the stories, rather than explore the genuine psychological underpinnings that made the first one so effective.

Now, with the reboot of SPIRAL: FROM THE BOOK OF SAW, we have perhaps the most egregious of all the sequels. It wants to be a new day with a clean slate, but instead, it’s as dumb, lazy, and grisly as any of the seven inferior sequels before it. It also strands big stars Chris Rock and Samuel L. Jackson, and good actors like Max Minghella, in a noisy, bombastic story that has the audacity to pretend to be about police corruption. The genuine crime here is in how the film ruins its return and injures all parties involved.

If you saw the original SAW, expertly written by Leigh Whannel and directed by James Wan, the first for both, you’ll remember that two men (Cary Elwes and Whannel, doing double duty) woke up in a large, filthy bathroom where tape-recorded messages instructed them that one must kill the other to ensure the lives of their family. Just who these men were, what they had in common, and why someone would do this to them, was all a mystery. Part of the fun of it all was watching the two bicker and fret over their horrendous predicament as the “ticking clock” of doom became more and more inescapable.

It’s also worth noting that the violence in the first film was kept to an utter minimum. In fact, the scariest and most violent scene in the film is actually a flashback, one we knew the outcome of. It still played like gangbusters though because the horrible possibility of what could have happened in that scene was so terrifying. In the scene, a drug addict played by Shawnee Smith awakes to find herself trapped in an abandoned warehouse with her head encased in a contraption that looked like Edgar Allan Poe’s version of a bear trap. She’s given a couple of minutes to fish the key out of the stomach of another kidnapped person in the room with her as to free herself. But that means she’s going to have to kill him. If she would’ve failed her task, the spring on the mask would have snapped and crushed her head like a cantaloupe. The fact that she is telling the police this story after the incident doesn’t lessen the terror of it one iota. It was a scene of brilliant horror, one that created fear in our brains rather than literally in front of our eyes.

Such a lesson has been lost on every single sequel since, and it’s lost on the makers of SPIRAL too. Even though the film starts with an interesting premise, it isn’t long before the worst habits of bloodletting exploitation kick in and start to muck up the works.

The plot this time concerns detectives who discover that they are being picked off one by one. Does anyone ask a single smart question about why? Do they examine their histories together in a sit-down way, one rich with self-evaluation? No, they simply yell and bitch at each other like seven-year-olds on a playground.

But then, the film starts with an overly nasty death of one of the cops, instructing where the heart of the film lies once again. It may pretend to be about police corruption, but the film is truly only interested in bloodletting. In the awful first death scene, a cop’s strapped to an elaborate machine in a subway with his tongue about to be ripped out. Of course, we watch his anguish for a good couple of minutes until the appendage is lost, just seconds before the rest of him is hit head-on by a steaming subway car.

Any pretense of tension is undercut by two things in that first murder: the giddy glee that the filmmakers express in showcasing all the gurgling noises and dripping visuals as the cop struggles to release himself from his predicament, and the fact that anyone who knows the franchise realizes that he’s going to die so why the elongation of it? Better filmmakers would have disposed of such a murder quickly and moved onto the whodunnit.

Rock plays Detective Zeke Banks, a foul-mouthed and bad-tempered man hated by his fellow cops for being moral and loathed by his soon-to-be-ex for being obsessed with his job. (The film gets in some nasty, sexist swipes against wives too. Unfortunately.) But as Banks and his squad try to figure out what’s going on, they miss clue after obvious clue, fail to recognize genuine suspicious characters and make silly moves that no one with a detective badge would ever be so gullible to make. Three detectives in the inner circle have already been slaughtered, but please, Captain Garza (Marisa Nichols), go down to the evidence room in the empty basement alone. What could possibly happen?

Jackson shows up as Banks’ dad and their relationship is as strained as all of the other relationships the detective has in the story. Both actors struggle with the exposition-heavy dialogue they’re given, and Rock, in particular, needs better direction than what he’s given here by veteran franchise helmer Darren Lynn Bousman. Rock can be a good actor, as his turn on the limited series FARGO proved last year, but here he’s too muted in some scenes and too strident in others. But then again, the franchise hasn’t really been known for actorly nuance.

If you’re going to reboot the franchise with big stars and try to give it some heft by critiquing police departments that too willingly defend the “Blue Wall” at all costs, then you need to do better than a lazy retread of all the SAW franchise cliches. The story needed to be a smarter mystery (you’ll know who the killer is the minute he’s introduced), with less of the franchise’s typical grotesqueries, and more character development amongst all its cast. Such ambitions seem wholly lost on Josh Stolberg and Peter Goldinger, the two screenwriters here, as they tick off one SAW cliche after another with little variety or subtly.

The film feels like it’s not only exploiting the very real problem of policing in this nation but also the audience willing to give the franchise a new look. But what is one to make of all the tried-and-true tropes trotted out so typically: the marionettes, the synthesized villain voice to camouflage his true identity, and the ridiculously elaborate contraptions that would take days, if not engineering degrees, to set up. Granted, a lot of such things could be overlooked if the film delivered a half dozen juicy scares or created characters worth rooting for, but none of that is present here.

from The Establishing Shot https://ift.tt/3tKGJnW
via IFTTT