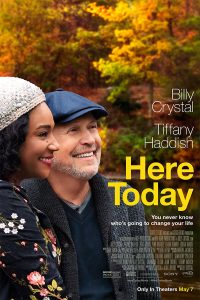 Despite his enormous talents, avid charity work, and legendary Oscar hosting, he’s earned a reputation over the years as a difficult egotist. Thomas Lennon had nothing good to say about him in his book about adventures in the screen trade. Crystal bit the hand feeding him when he scolded the Tony Awards for not nominating his one-man show 700 SUNDAYS for Best Play while accepting a special award from them in 2005. And the 73-year-old comic has too often bemoaned not being nominated for any Academy Awards for his writing, directing, and starring in MR. SATURDAY NIGHT in 1992. Billy Crystal is his own biggest fan, it would seem, and with his ego so egregiously on display in his new movie HERE TODAY, that makes him his own worst enemy here.

Crystal is the star, director, producer, and co-writer (along with Alan Zweibel) of the film and all his efforts are even more of a mixed bag than they were in MR. SATURDAY NIGHT. Here, he’s playing another fictionalized show biz legend, but he can’t resist making it a thinly veiled salute to himself. Instead of focusing on the story’s driving plot about an aging comedy writer who is starting to suffer the effects of dementia, the film becomes more of an opportunity for Crystal to hector everyone onscreen about what he thinks is funny.

Charlie Berns (Crystal) is a legendary playwright and screenwriter in the story who is now working as a consultant to a SATURDAY NIGHT LIVE type of variety show. Berns is losing his memory, but it doesn’t prevent him from striking up a new friendship with a fan named Emma Payge. As played by Tiffany Haddish, she’s opinionated, brazen, and adorable as hell, no surprise there, and she has wonderful chemistry with Crystal. They riff and banter together like two old vaudevillians, ladling on the schtick, funny voices, and one-liners.

Ultimately, Emma will come to help Charlie battle his health issues while becoming his new BFF. If the film spent more on this odd coupling, as well as the creeping Alzheimer’s, Crystal might have had a moving and gentle character study on his hands. Unfortunately, he just can’t resist returning again and again to the variety show setting to lecture everyone on screen about the rules of comedy. In scene after scene, Charlie proclaims what’s funny, who’s talented, how lines should be read, and where a joke bends or breaks. It isn’t very amusing. Instead, it’s sanctimonious.

And the gags that Crystal writes for the movie feel dated and strained too, so where’s the funny anywhere here? Making fun of Siri, the cost of prescription drugs and senior citizen constipation in 2021 hardly feels cutting edge. Yet, Crystal delivers all his opinions on such topics via his mouthpiece Charlie with a smug smirk that becomes offputting the more the film goes on. Crystal can be a terrific actor, but he’s not really playing one here. He’s just being himself writ large.

Seldom have Hollywood’s attempts to portray sketch comedy worked on screen anyway. MY FAVORITE YEAR managed to be effective back in 1982, but since then, there have been dozens of failures trying to showcase such program types, be it Aaron Sorkin’s television series STUDIO 60 ON THE SUNSET STRIP in 2006 or Mindy Kaling’s big-screen vehicle LATE NIGHT in 2019. Such efforts, like this one, seem like little more than self-absorbed navel-gazing.

Perhaps it was too much to expect something truly significant about the topic of dementia, especially after Anthony Hopkins’ Oscar-winning turn in THE FATHER, but Crystal should have made more out of that plot element. Rather than say something truly significant about that disease, the writer/director/actor spends way too much time showcasing another mental problem – his raging narcissism.

from The Establishing Shot https://ift.tt/3o1fuo3
via IFTTT