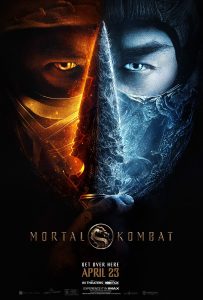 It seems strange that so many video games are not adapted as animated films for the big screen. They tend to all have an illustrated look to them, be it the ARKHAM or CALL OF DUTY franchises, so why not carry that over to the cinema? Instead, Hollywood filmmakers seem insistent upon recreating the fantastical fights and storylines as live-action. That is the situation with the new reboot of MORTAL KOMBAT, the feature film debut of director Simon McQuoid, and, by and large, the results are impressive. Still, one wonders if the film would’ve been better applying a SPIDER-MAN: INTO THE SPIDER-VERSE animated energy to the whole shebang instead of the expensive reliance upon CGI.

No matter, the action that does appear onscreen in the new MORTAL KOMBAT, debuting today in theaters and on HBO Max, is quite impressive. The budget of $95 million is up there on the screen and McQuoid and his team knows how to shoot and cut fight scenes so they’re easy to follow. The filmmakers also manage to introduce the plethora of characters from the gaming franchise, too many for sure, with style as well. They give the backstory its due and treat it all quite straight. All in all, it’s a solid reboot, much better than the films from the 90s.

The story starts with a healthy dose of 17th-century lore as Bi-Han (Joe Taslim) and his ninjas attack the house of rival Hanzo Hasashi (Hiroyuki Sanada). Bi-Han kills Hasashi’s wife and son with his freezing powers, but a hidden baby daughter eludes them. Then Hasashi and Bi-Han have it out in an extended fight sequence that sets the template for the rest of the film: some quick character intros, then onto extravagant kicking and bloodletting. And McQuoid doesn’t hold back in the carnage either, earnestly earning that R rating with every villain’s demise. (The salty language helped secure an adult rating as well.)

That early fight scene also introduces a few tropes that will be brought back later, not the least of them being Hasashi’s clever makeshift weapon of a handheld gardening tool tied to a rope. But from there, the film moves to modern-day where we’re introduced to a new character to the franchise named Cole Young (Lewis Tan). He’s an unsuccessful MMA fighter, but you just know that by the end of the film his fighting skills will go way beyond those necessary to prevail in a cage match. Quickly, he’s tapped to join the fight against the evil powers afoot to control the world.

Indeed, the rest of the story plays as a veritable road picture with Cole picking up new allies for his team of warriors as they venture to the realm of Outworld (a fantastical, mystical place where fighting for control of the world takes place). Amongst his new allies are plenty of characters familiar from the gaming world including “Jax” Briggs (Mehcad Brooks), Sonya Blade (Jessica McNamee), and Kano (Josh Lawson). In hot pursuit of them is Bi-Han, now masked and going by the rather on-the-nose moniker of Sub-Zero. He’s serving as the main henchman of Shang Tsung (Chin Han), an overlord who wants to keep control of Outworld by killing off those members of Earthrealm either by hook, crook, or the inevitable matches that will take place as part of the Mortal Kombat skirmishes.

More characters are introduced, the savage set pieces become more elaborate, and it’s all got a rollicking nuttiness to it that is entertaining and even breathtaking at times. For the uninitiated or those with only a casual awareness of the Mortal Kombat history, the overly elaborate scope of the relationships, generational backstories, reincarnation, and rules of engagement written into the screenplay by Greg Russo and Dave Callaham may be a turn-off. Best to sit back, relax and ignore a lot of the story tossed about. Better to just watch the actors tossed about in one frothy fight scene after another.

It’s nice that the actors play most of this silliness straiught, though every time one of them is given the opportunity to drop an F-bomb, they do so with a bit too much relish. And as stalwart and athletic as Cole is, the character of Sub-Zero is the most interesting one onscreen. The film continually finds new ways for him to freeze his opponents.  It’s often gross, like when one character loses his frozen-off arms, but at least Sub-Zero is clever in his viciousness.

That’s an apt description of the entire film. It’s vicious, yet clever fun, doing the original source material proud and showing that if you’re going to adapt video games via live-action, this is the way to do it.

from The Establishing Shot https://ift.tt/32E9IPk
via IFTTT