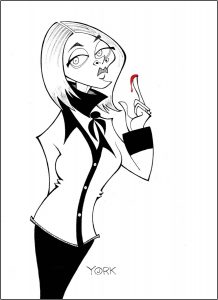 Rare is the vampire film that finds sympathy for all the characters involved. Most filmmakers tackling frighteners are content to portray vampires as little more than seething fiends, but not director Travis Stevens and his fellow screenwriters Kathy Charles and Mark Steensland. Their movie JAKOB’S WIFE opens in theaters and on VOD today and should be seen just for its ‘sympathy for the devil’ if you will, a rarity in horror. Add in all of its other attributes including plenty of frights, compelling characters, and loads of cheeky wit, not to mention an award-worthy performance from Barbara Crampton, and you’ve got one must-see horror film.

Crampton plays Anne Fedder, the meek wife of Pastor Jakob Fedder (Larry Fessenden). They preside over a sleepy little church in a dull town and she’s so bored during services that she rolls up her program like a restless 7-year-old. The long-suffering Anne can barely pay attention to her self-absorbed husband’s sermons, let alone watch him chew food with his mouth open at breakfast. Anne is longing for something, anything, a miracle (!) to shake her out of her doldrums. Her prayers are answered when an old flame visits the sleepy burg on a business trip.

Tom Low (Robert Rusler) may have lost his old girlfriend to the preacher over three decades ago, but he can’t get over his first love. While Anne shows him the rundown, abandoned mill Tom’s company is thinking of buying, the aging lothario can barely keep his mind on business, or his hands off of her. She accepts his lusty kiss, mostly because she’s felt no passion for years, but stops short of consummation. The moral Anne still loves her husband and respects her vows.

She doesn’t have to worry about Tom’s temptation too much longer though as before he can make another move, he’s done in by a crate of ravenous rats. They belong to “The Master,” a centuries-old vampire who’s come to town and is picking off various members of the community. The Master decides to nosh on Anne right there, but not turn her entirely. This will, as we soon find out, ultimately have to be Anne’s decision, and it takes the film in a sly feminist direction. Returning home, Anne is a different woman, not only discombobulated by the assault but feeling more alive than she has in years.

From there, the story never quite goes in the direction you think it will and that’s a credit to the fresh thinking on behalf of the filmmakers here. The villains are wholly bad, the victims not holy innocent, and even the minister turns out to be heroic without losing his oafishness. Indeed, Jakob may be foolish plenty of times, huffing and puffing with doughy exasperation like Alan Hale, Jr. but he’s also a caring man. At times, he’s quite knowing and shrewd, and as the film goes on, he becomes more caring and courageous of his wife and community.

Additionally, Jakob is able to recognize how different his wife has become and how good it looks on her. Her new state empowers Anne to speak up and stand up for herself. She becomes physical, fashionable, and lusty.  And the film sides with her too. She’s not the victim as much as victorious, becoming a full human again. Hey, what’s wrong with a little bloodsucking when the patriarchy has been sucking the life out of women for centuries?

Even “The Master” gets a chance to explain his/her take on the cruel world and why vampires believe in screwing others before they get screwed. This vamp brings out the vamp in Anne too as she dresses chic even to go grocery shopping. One of the best scenes in the film shows her sampling blood from a steak in the meat section. She’s demure enough still to hide the bite marks on her neck with a fashionable scarf but brazen enough to ask for dozens of rare steaks so she can suck the blood at home.

Crampton has displayed great range in the horror genre, from comely co-ed in RE-ANIMATOR (1985) to the wise mother in YOU’RE NEXT (2011), but this is her best work by far. She captures all the pathos of the character as well as the passions aroused. It’s an amazing physical performance too. Her gait changes, her voice grows more commanding, even the way her wide, piercing blue eyes focus on what’s in front of her. As a mouse, Crampton’s Anne gave everything that thousand-mile stare, but as a feline predator, those eyes are feasting in all kinds of ways…long before she even gets close to a neck.

Stevens shoots everything straight by and large, never letting the inherent comedy of the material underline the performances, cinematography, or music. Granted, he makes some cheeky transitional cuts, like one going from burial soil to instant coffee crystals, but his direction never turns into parody. He keeps this dark comedy grounded, relatable, and at times, even sweet. Anne gets most of his sympathy of course, but Jakob is dealt a fair hand too. And veteran character-actor Fessenden goes boldly too, not afraid to show his character’s dark side or backside. It’s a noble performance.

The film turns tropes and cliches on its ear too, finding all sorts of fresh ways to serve up violence and bloodletting. I love how a teeth whitening machine in a dentist’s office threatens one vampire like the sun. It’s also nice to see cops in a genre film not treated like drooling idiots. And how shrewd that Stevens cast Bonnie Aarons, of THE NUN fame, as “The Master.” The androgynous nosferatu gives a great speech about empowerment and it could almost be Gloria Steinem talking. It’s also quite clever how Stevens gussies up “The Master” to look like Mr. Barlow from SALEM’S LOT. He knows his horror well enough to borrow what’s right and reinvent wherever possible.

The film even has an 80’s look and sound to it, giving it a similar sense of nostalgia as STRANGER THINGS. But make no mistake, JAKOB’S WIFE is wholly modern despite such window dressing. It not only finds sympathy for all its characters, bloodsucking or not, but it smartly avoids blaspheming the church. This is revisionist horror, a feminist call-to-arms in its way, and a compassionate character study. The film has bitten off a lot but it’s one helluva chew.

from The Establishing Shot https://ift.tt/3ebtp6j
via IFTTT