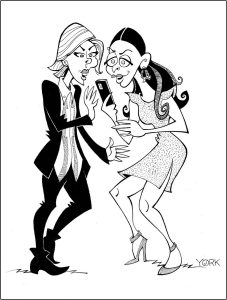 The late playwright Wendy Wasserstein said that the mistake women made moving into CEO roles is that they imitated men. Rather than rely on their own personalities and instincts, too many tried to be macho and tough.

That is not the case with the two females heading up a tech company in the online comedy series BETA. The exuberant Lini and the tightly-wound Delta fully embrace their femininity, from their nurturing of each other as colleagues and friends, to their unapologetic embrace of lavender aromatherapy, advice from Dr. Oz, and moisturizer as part of their integrated management systems.

Like many fresh and innovative TV shows these days, BETA stands out not only for its story but in how it’s served up to its audience. It’s on a non-traditional platform (YouTube) and is told in bite-size chapters, between 4 and 12 minutes long rather than the standard 23-minutes sitcom episodes on network television. (You can read all about the series, and watch its episodes here as well: https://www.betatheseries.com)

Such unique approaches to the world of sitcoms make this show feel ultra-modern, as does its female POV. It helps too that the creators of the show are also its producers, directors, writers, and stars: Carley Marcelle and Adriana Leonard. Leonard plays Lini, all motor-mouthed musings and loose-limbed body language, serving as a peppy life coach to her partner. Marcelle plays the more neurotic Delta, an experienced and prideful businesswoman who starts out each day a crisp dollar bill only to get rumpled, folded and frayed in almost every episode. Together, the two play like a female version of THE ODD COUPLE onscreen in this hilarious show, and like Hollywood moguls behind the cameras pulling all the strings for their own start-up production.

And while the title BETA refers to the test version of an undeveloped product, in this case, the tech company that Lini and Delta are starting, it also covers their friendship, still in its beginning stages. Lini was originally Delta’s assistant, but then some inter-office missteps and shenanigans got them both fired, forcing them into a partnership to make a living. Moving in together, their apartment becomes office headquarters as well as the testing ground for their friendship. 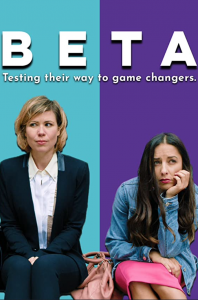 As the series progresses over the nine episodes in its first season, the two become close, have some successes, and learn a lot about their business, each other, and themselves. Of course, their partnership ends up having a life-changing effect on each other too. Delta and Lini learn from each other, becoming better individuals, and growing into a dynamic team too.

It’s fun to watch Lini mature especially, learning to think more before she speaks, and even dress better. One of the better running gags in the show is how her wardrobe is always just a little off. Earrings that are too big, colors a touch loud, accessories too gangly – she seems to always be one wobbly pump away from registering as a hot mess. I particularly enjoyed Lini’s propensity for sleeveless dresses with winged shoulders. It’s like they’re her little way of reminding herself to take wing each day.

Both actresses are sharp comics, adept at delivering punchlines, double-takes, and slapstick.  They can also pull off the pathos when they have to. Leonard is especially gifted at physical comedy, tripping over herself in heels that always seem too chunky on her delicate feet. She can’t enter or leave a room without some sort of difficulty navigating the door. Leonard is model-beautiful but she unabashedly turns her full lips into rubber bands and rolls her cat eyes with abandon. Her Lini is like Heidi Klum if she went through Jeff Goldblum’s machine in THE FLY with Harpo Marx and they morphed into a glamorous, woman-child.

Meanwhile, Marcelle’s talents are equally commendable in the slightly straighter part. At times, Marcelle suggests Catherine O’Hara in both looks and style. Her Delta is a proud woman, taken aback by the ugliness and oddities of the business world each day. It’s a joy to watch Marcelle purse her lips and jut her jaw as if they’re weaponry against it all.

Still, by the end of the first season, the two lead characters have found some success and impressed their peers. Despite the blunders, they achieve qualified victories as businesswomen and as self-realized individuals. The battle goes on, a never-ending challenge to find a healthy balance between career and personal life, but these two seem destined for such a mix. Heck, Lini even learns to dress more professionally.

For a show shot on a shoestring, it looks plenty slick and sexy too. BETA makes excellent use of locations, natural light, and a game, supporting cast. Such shows are too often overlooked for awards, but this show should merit serious consideration, especially for its two leads, writing, and costume design. Not since WKRP IN CINCINNATI has wardrobe said so much comedically about its players.

The show also strikes a blow for female artists choosing to chart their own paths, telling their own stories, and producing them themselves. Hopefully, the show will warrant a second season as there is much more to tell about these two hilarious heroines. It would be especially gratifying to see a network pick up the show and give it a full 13-episode season run at that 23-minute length. Leonard and Marcelle have got a very good thing going here and I want more.

I recently talked to Leonard about the show and her answers to my questions were as forthright and fresh as her show:

What was the impetus of BETA?

I’ve watched business leaders my whole life and thought “If I wasn’t in the arts, I would be a CEO and I think I’d be really good at it.” My understanding of what that meant and what it took to climb in the business world was so limited to the small circle of people around me or the news stories I would read about business leaders. Very few of them were women. Our goal with BETA is to change that. My co-creator Carley and I wanted to tell a story that would inspire young women to pursue their dreams in technology and business career paths and also help change the narrative that women don’t in those roles. It’s imperative that women’s voices are represented in the conversations that are changing and shaping the future. We hope the series helps encourage ongoing conversations of gender dynamics in business, the grind of startup culture, and the complexities of modern-day feminism and we hope to be the story that makes our upcoming generation of young women and men believe “they can too”.

What is the difference for you between writing, directing, and acting?

All of these allow me to bring life into a project in a different way. They give me such freedom to let my imagination go wild and explore so many different worlds. In each of them, it takes insane courage to trust your instincts and your work and let yourself feel go there. As a writer, it’s thrilling to see an actor interpret your words and bring them to life. As an actor, it’s exciting to take new stories and dive into a new world, bringing pieces of me to build a character. It’s becoming very hard for me to turn one of them off – in any of these roles my brain is constantly orchestrating the other role, so I’m working on the balancing act of that because of the women that inspire me to do it all so well! 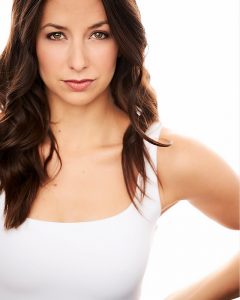 What artistic influences have affected you and in what ways?

Honestly, the world inspires my art and my inner being. There is so much around you if you pay attention to it. I frequently turn to poetry, artwork, music, film. and nature to evoke a deeper level of consciousness in myself. These things transcend me and change the way I feel and think about things and the understanding I’m able to have about people and the world.

What strengths do you think women bring to the world of business, and specifically, show business?

I think women are able to fearlessly show up as their whole selves. As a society, we are still evolving to allow women and men to be seen as strong, passionate leaders who are also allowed to show empathy and emotion. I think women in show business are great at fostering warm, safe environments, fostering a desirable culture, and communicating what exactly they need to get the job done.

Ah, Hollywood. The land of dreamers. I love that Hollywood is full of potential that you can see. I have so many wildly successful friends who make impossible dreams look completely in reach. If you dive in with your whole heart and complete faith, it is the most inspiring and motivating place to be an artist. However, I hate how it’s an industry that can just suck the life out of you at the same time. It can be shallow, and you can really lose your way in trying to be everything to everyone. You have to stay true to yourself and know your worth, and that can be a hard thing to do at times. The truth is you don’t have to be selfish to be successful. You can be a good person and you can help other people along the way. I hope I always have people in my world that keep me accountable for that.

What’s the hardest part about writing scripts for you?

Focus. I really have to be in a calming environment that I can just focus on the writing. Otherwise, when I hit a roadblock, it becomes too easy to look around me at the other things that need to get done and justify why I should quickly do them. I also get very excited once I have an idea and the juices are flowing that my instinct becomes “let’s just make this.” Sometimes I have to slow myself down and make sure I’m doing all the steps necessary to tell the story to its fullest potential. 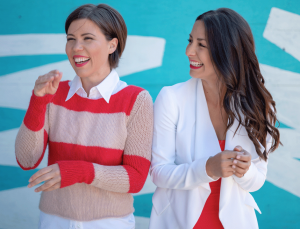 from The Establishing Shot https://ift.tt/2PoJZrj
via IFTTT