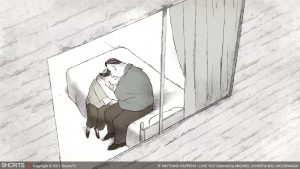 It’s always a pleasure to view the short films that make the finals for the Academy Awards each year. The animated and live-action shorts may be limited in time, but they’re never limited in scope, imagination, or execution. In fact, very often, they’re as good as most features. Additionally, the animation shorts always serve up a broader range of styles than you’ll find in the mainstream family fare that dominates the cinemas as well.

Case in point? BURROW. Its broken-line, 2D, cel animation has a European look to it, but it’s actually an entry from Disney and Pixar this year. Directed by Madeline Sharafian and produced by Michael Capbarat, the six-minute story finds a young rabbit trying to dig the perfect hole of a home for herself. 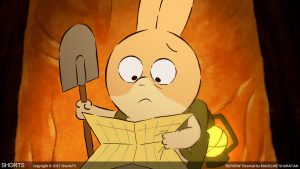 It may have a slightly rough-hewn look to it, but its sophistication in storytelling is evident in every scene. For starters, one of the best running gags in the short concerns a crude blueprint the young rabbit clutches throughout. On it are her crude scribbles of an ideal home. Her hole-in-the-ground contains a bed, a dinner table, and a disco…all the things a young girl dreams of. You know as often as the sheet is referenced, by the end, that home will indeed have a disco ball in it. It’s just that kind of cheeky gag.

Additional cheek comes from all of her neighbors popping in and out of the dirt around her. They show up like nosy neighbors in a sitcom, barely giving the bunny a moment to start building her dream house. Soon, she’s burrowing all over the underground, dropping into her neighbors’ increasingly elaborate sanctuaries. There are limits to tying to keeping up with the Joneses, or in this case, the Badgers. 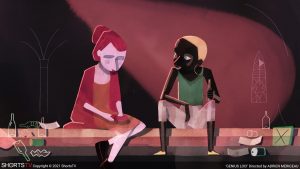 180 degrees in the opposite direction is the French short GENIUS LOCI. This 16-minute gem from director Adrien Merigeau and producer Amaury Ovise plays like a fever dream. Reine, a young loner, living in a city apartment is asked by her sister to watch the baby and the soup on the stove while she showers. As Reine starts to connect to the home environment and the tasks at hand, her imagination runs wild.

She envisions herself knocking over a glass of water, becoming an endless wave of liquid washing over everything. It’s a metaphor for her imagination, of course, and soon enough the baby’s cry becomes abrasive noises in the city, Reine morphs into others, and the animation’s watercolors blend seamlessly from object to object. It’s gorgeous, esoteric, and very adult. 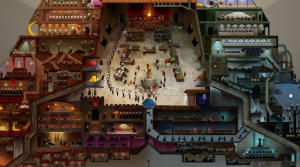 Perhaps the strangest animated short this year, and one as mesmerizing as any in the last decade, is the nine-minute OPERA from South Korea. Directed by Erick Oh and produced by Beasts and Natives Alike, it plays like a Renaissance Fresco painting come to life.

Designed to be viewed long distance, the short shows us all kinds of human interaction with operatic surroundings, from the stage to the audience to below the floorboards. The camera methodically scrolls down revealing all the antics occurring on various levels. Some are joyous, some tense, others farcically exuberant. Yet as our gaze is pointed ever downward, the scenarios become more and more sinister. Is this a dream, a nightmare, or something that Hieronymus Bosch himself would be envious of? 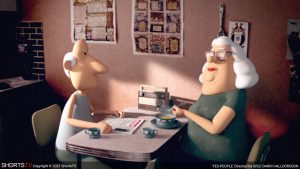 You’d probably expect something a little off-kilter from Iceland, and the eccentric YES-PEOPLE certainly is just that. Directed by Gisli Darri Halldorsson and produced by Arnar Gunnarsson and Halldorsson, the nine-minute short follows an odd assortment of apartment tenants. We get an intimate at their daily lives, their dreams, and fears.

The walls are pretty thin, so when an old woman entices her eager husband into the bedroom, their noisy sexual hijinks travel from one apartment to the other. Some ignore it, others are inspired by it. One of the short’s funniest bits involves a sour, heavy-drinking wife glaring at her plump, oblivious hubby as he trudges back and forth. Behind her on the wall is their wedding photo depicting a wide-eyed innocent and her adoring husband. Ah, marriage. 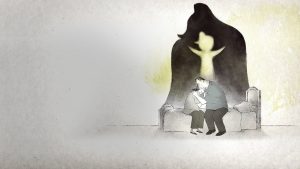 The last short will surely put a lump in your throat. The USA-made IF ANYTHING HAPPENS I LOVE YOU is directed by Michael Govier and Will McCormick and produced by Govier, Maryann Garger, Gary Gilbert, and Gerald Chamales. In this elegy on grief, a husband and wife get lost in their own despair as they recall their dearly departed daughter.

Everywhere they look, they are reminded of her. And when the full picture comes into focus, it’s as devastating a revelation as in any feature this year. IF ANYTHING HAPPENS TO YOU is so affecting, it probably has an edge over the others in the balloting. It’s a stunning work.

But then, all of the animated shorts this year are terrific. The showcase even has some of the runners-up and they’re exceptional too. The Oscar-nominated shorts are in theaters this weekend and on VOD in a few more weeks. Make your plans to catch all of them, in short order.

from The Establishing Shot https://ift.tt/3fwqJ5P
via IFTTT