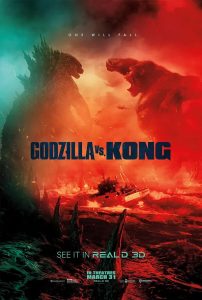 It’s a shame that the new film GODZILLA vs. KONG follows in the footsteps of 2019’s GODZILLA: KING OF THE MONSTERS more than 2017’s KONG: SKULL ISLAND. The Godzilla movie starring Millie Bobby Brown and Kyle Chandler was reasonably satisfactory entertainment, but the Kong reboot was much more inspired. Starring Tom Hiddleston, Brie Larson, Samuel L. Jackson, and John C. Reilly, the movie was more of a character-driven actioner with good roles for a dozen players, including the ornery giant ape. And the characters were put into direct danger on Skull Island where they had to survive the threat from dozens of prehistoric creepy crawlers, let alone Kong’s wrath. Those direct stakes made KONG: SKULL ISLAND much more palpable.

The movie was also cheekier, with some surprising depth because of its post-Vietnam setting of 1973. America’s military loss in that country made for an ornery batch of soldiers on their way home, still itching for a fight. They got another chance when they were called into battle on Skull Island against a plethora of giant, prehistoric creatures. In doing so, the plot added a layer of satire, riffing on America’s penchant for meddling overseas. Skull Island ended up being one more foreign land where the US military overstepped.

The Godzilla remake, on the other hand, took place in today’s time, had far less interesting characters, and little of the subtext of SKULL ISLAND. A very good cast, including Vera Farmiga, Bradley Whitford, David Strathairn, did okay with what they had to play, but everyone in the movie spent too much time watching the action from afar, often staring at it on computer screens. That’s essentially the same route GODZILLA vs. KONG takes, and it doesn’t serve the actors or monsters well one iota.

To make matters worse, most of what the actors are given to do is either recite scientific gobbledygook or explain plot points to make up for a frenzied, hot mess of a plot. This time out, the two titans are supposedly battling over claim to being the king of the beasts, as well as some natural resources kept underground that can somehow save mankind. Whaaat?

Good actors like Rebecca Hall get stuck muttering atrocious lines like, “This won’t end until one of them submits.” Alexander Skarsgard, hoping to reboot his film career after his multiple-award-winning triumph in BIG LITTLE LIES on HBO, doesn’t get many chances to shine either. He has some derring-do as a soldier invested in Team Kong, but mostly, he and Hall try to explain to each other what’s going on as they chase after the big monkey in their neon-lit space shuttlecraft.

In fact, there’s a preoccupation with neon everywhere you turn in this film. Those underground resources have a day-glow purple hue to them. Every room and corridor in the military’s underground lab is lit like Joel Schumacher is still lighting his franchise ruin of BATMAN & ROBIN. And when the climax moves to Tokyo, the two beasts battle at night to take full advantage of the neon-trimmed skyscrapers that dominate the city.

Director Adam Wingard shoots some of the action reasonably well, but nothing feels fresh or particularly exciting. There’s too much mania in the mish-mash of human storylines, including a returning Brown whose part here feels wholly unnecessary. Brian Tyree Henry provides some comic relief, thankfully, and there’s a little, hearing-impaired girl named Jia (Kaylie Hottle) who provides the cute when she signs with Kong. He’s like a 10-story version of Koko the gorilla, and it’s the only real interesting part of his characterization here.

In the third act, the two beasts throw down in the city, taking out so many buildings that one starts to think that Tokyo is going to need its own “infrastructure week.” The film also adds more and more spectacle, including some tropes straight out of PACIFIC RIM involving a giant robot. Kong and Godzilla may be the names in the title, but soon their fight gives way to battling a 10-ft-tall cyborg. Who wins when the film can’t even live up to its promised deathmatch?

from The Establishing Shot https://ift.tt/3djcbUe
via IFTTT