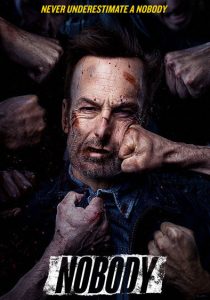 The title of the new actioner starring Bob Odenkirk (BETTER CALL SAUL) is one dripping with irony. For while the nebbish main character may seem like a zero, the kind of guy getting beat up by six fists in one poster, he’s actually the exact opposite. A former special-ops expert, he’s Rambo in the suburbs, Van Damme in the land of mini-vans, a hero not to be crossed by a Karen or a crook. Well, crossed he is, and revenge is sweet if all too familiar.

The writer/director is Ilya Naishuller, the man who wrote, directed, and shot HARDCORE HARRY, an auspicious feature debut with a balls-to-the-walls ethos and little is different in this production. In fact, the producers of this release that opens Friday are the same folks behind the wildly popular JOHN WICK franchise, and they’re on very comfortable ground here. You come in expecting all kinds of mayhem and boy, this film delivers.

Naishuller delivers a virtuoso technical marvel of a movie with camera work, editing, sound design, and fight choreography that is mightily impressive. And yet, even with all that going for it, the movie simply feels way, way too familiar. Other than the novelty of casting Odenkirk as an action hero, everything here gave me an extreme sense of déjà vu. Been there, pummeled that.

His wife Becca (Connie Nielsen) is a high-powered realtor, not to mention a knock-out, and yet Hutch’s relationship with her has settled into a grind where they barely acknowledge each other. Romance is so bereft in their relationship, they sleep with a wall of pillows put up between them. The most she says to him in a day is a running dig at his wadded-up napkins missing the trash can. One assumes they sleep well at night because their life is such a yawn.

But then one evening, two masked thieves break into the house and awaken Hutch. He stealthily picks up a golf club to fight back but then backs off. When Becca and their teenage son Blake (Gage Munroe) awake, the boy fights back and gets the best of the nervous male robber. Hutch has a golden opportunity to vanquish the intruders but instead wimps out and they escape. The next day, his family all look down on him, even his younger daughter Sammy (Paisley Cadorath) who assumes the robbers stole her bunny plush toy.

But soon afterward, Hutch can bear such indignities no longer so he sneaks the gun out of the nursing home closet of his invalid father (Christopher Lloyd). Hutch hunts down the thieves and manhandles them with adroit skill. He even gets back his gold watch, but cannot find his daughter’s bunny. Frustrated, he boards a bus headed for home, and as soon as he sits down, it’s overtaken by some partying Eurotrash goons. They start to intimidate the regular passengers and Hutch gets up to fight back. And boy, does he ever. He reduces each of them to quivering jumbles of crushed bone, broken teeth, and bloody pulp.

So far, so good. But then the gang is revealed to be the henchman of a  Russian drug lord named Yulian Kuznetsov (Aleksei Serebryakov) and the film creeps into the same revenge tales Hollywood has told a lot over the past three or four decades. If you’ve seen ATOMIC BLONDE, DEATH WISH, THE EQUALIZER, or AVA, you know exactly what’s coming.

That’s not to say it doesn’t play, but you can set your watch by what happens next. The goons attack Hutch in his home, a big confrontation occurs in a discotheque, there are fights and gunplay and car chases, not to mention an endless body count. The fact that Lloyd’s character turns out to be as vicious as his son is somewhat of a surprise, but little else raises an eyebrow.

Odenkirk’s stuntwork is impressive, as are his droll expressions and dry line deliveries. And I commend Naishuller for filming and editing the action so we can actually see what’s happening. Clearly, he spent a lot of time prepping his actors and stuntmen, as well as precisely setting up each cocked camera angle and a host of dolly shots utilized to bring all his set pieces to life.

But why wasn’t the script given the same attention? Hutch’s character doesn’t get much exploration and he doesn’t show a second’s hesitation about mowing down dozens and dozens of baddies in public places where plenty of innocent bystanders could get caught in the crossfire. As for the rest of the players, most of them are lucky to be two-dimensional instead of merely one. Shoot-em-ups like this don’t have to be deep, but must they be quite this shallow? For NOBODY to be truly something, it should have tried to be a little more consequential.

from The Establishing Shot https://ift.tt/3tIhBic
via IFTTT