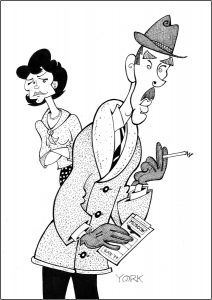 Original caricature by Jeff York of Jessie Buckley and Benedict Cumberbatch in THE COURIER (copyright 2021).

There’s nothing wrong with Bond or Bourne, but the stakes in those spy franchises are always artificial as you know the hero is never going to die. That’s not true in THE COURIER. Unless you know the true story of Londoner Greville Wynne and his role as a Western courier of Soviet secrets during the Cold War, you will be fretting for him from his first steps inside the Iron Curtain to his last. This is a character-driven espionage thriller, a true story, and it’s all the more incredible because of it. The film may not have the snap, crackle, and pop of 007, but its stakes are higher and its effect much more palpable. And for my money, it’s the first great film of 2021.

In the early 60s, Soviet premier Nikita Khrushchev ruled the Soviet Union with an erratic but iron fist and many inside the Kremlin were doing what they could to temper his more volatile impulses. To avoid his bloviating about WWIII, some subordinates were willing to leak Russian information to the West to keep the premier in check. One of them was high-ranking GRU officer Oleg Penkovsky (Merab Ninidze), a drolly elegant, and cool as a cucumber Ruskie who believed in the Revolution but not in Khrushchev’s maniacal managerial style.

The Brits and Americans knew that Penkovsky wanted to help tame this beast, but they needed a courier to travel in and out of Moscow to retrieve his Kremlin secrets. Enter Wynne (Benedict Cumberbatch), an electrical engineer familiar with Penkovsky from some Soviet business interactions. American attaché Emily Donovan (Rachel Brosnahan, blonde here, but still honking like Mrs. Maisel) and MI-6 liaison Dickie Franks (Angus Wright) recruit Wynne over a veddy British lunch at a gentleman’s club, convincing him to do his duty for Queen and country as a newly anointed gentleman spy.

At first, Wynne is terrified of the task. He’s a modest fellow, happy with his sales job, smart wife Sheila (Jessie Buckley), and clever kid Andrew (Keir Hills). About the only pretending he knows how to do is throw golf putts to gain sympathy from clients, so they’ll buy his merchandise. But soon enough, he agrees to fly into Russia and become a spy. It’s rough sailing at first, but soon enough, he’s sailing through customs and acting the part.

Cumberbatch can play cold and odd better than just about anyone these days, but here he’s called upon to play a sweet, regular Joe. He’s spectacular at it, and this might very well be his greatest this side of SHERLOCK. With his hair slicked back and a fussy mustache atop his lip, Cumberbatch’s Wynne is so uncool he could almost be Mr. Bean. During his first trip to Moscow, he looks like an out-of-town rube in his small fedora and sheepskin coat. The sight of him, this small little man, walking about the intimidating streets in the dead of a Russian winter is one of the film’s slyest moments. He’s dwarfed by the mission, literally and figuratively.

Still, even when Wynne is exceedingly vulnerable, Cumberbatch wisely speckles bits of cunning in his character’s eyes and reactions. Wynne turns out to be a pretty quick study and bamboozling Soviet officials isn’t much different than charming reluctant clients. Wynne becomes Bond, but he does become a solid player and the bond here is one he forges with his contact Penovsky.

The Russian starts to really admire Wynne for his cleverness and caring, let alone his bravery. The two become trusted allies, and when they attend an opera together, the two become friends. The film is wise to not make too much of their coupling, either as a bromance, or something latent, but they are soldiers, in the trenches together, putting their lives on the line.

Yet as engaging as all of this is, and Abel Korzeniowski’s music certainly plays up the caper qualities with his score that’s a bit of a callback to the likes of 1964’s TOPKAPI, director Dominic Cooke keeps traces of terror present at all times. Every extra could be a spy watching these two, and we become as paranoid about them in the audience as the two men do onscreen. When Tom O’Connor introduces more and more secondary characters into his script, the tension tightens all the more.

The two main characters develop a sort of Cold War “Odd Couple” vibe. Ninidze’s Penkovsky is as dry as one of 007’s martinis and Cumberbatch’s Wynne is all earnest and striving, trying to do good, trying to be appreciated. And yet, as fascinating as their relationship is onscreen, it’s Wynne’s marriage that gives the film its best sparkle. Wynne’s spouse is more than just the proverbial wife role. Sheila is smart, loving, and witty, and every bit her husband’s equal. Buckley gives another of her sterling onscreen performances in the role and establishes herself once again as an actress who makes every project better by her presence.

Brosnahan is fine, though not quite as dynamic as the role is written. One can imagine Rose Byrne being edgier and more forthright in the part. I’m not sure she’s always in wigs onscreen, as is Cumberbatch here, but such styling is a minor quibble of the film.

At the hour mark, the film takes a decidedly dark turn and some of the material in the second half is a touch too traumatic in tone. The filmmakers are trying to show exactly how dangerous all this was the whole time, but some violent scenes are still excessively shocking. Despite some of the cat and mouse fun of the earlier hour, the second hour reminds us how precarious the stakes in this spy game really were.

The production values are superb throughout, really capturing the 60s in every detail. This film could almost be a companion piece to THE QUEEN’S GAMBIT. It captures the gravitas of history too, reminding us that Bond was a fantasy for the time, and still is today. Real spies don’t drive Aston Martin’s or worry about how their drinks are prepared. Spooks are real people, regular Joe’s and Jane’s, trying to keep their cover and serve their country in a world that can all too quickly turn deadly. That’s what THE COURIER delivers.

from The Establishing Shot https://ift.tt/3ty80dC
via IFTTT