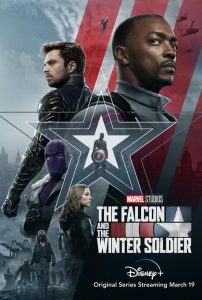 You have to hand it to Marvel Studios for the way they’ve approached the small screen. They’re not phoning it in or resting on their laurels one iota. Instead, they’ve brought production values and special effects to the small screen that are as stellar as those they’ve produced on the big screen. Additionally, they’re still telling imaginative stories with well-developed characters, no step-down there. The fare may be comic book adaptations, but there was nothing childish about WANDAVISION, nor is their new miniseries THE FALCON AND THE WINTER SOLDIER mere fluff. It premieres on Disney + Friday and it’s surprisingly serious.

The watchword for these first two series might just be gravitas. Consider that at first, WANDAVISION played like an elaborate satire of sitcoms starring one of the oddest of odd couples for TV in lead characters – witch Wanda Maximoff (Elizabeth Olsen) and her robot lover Vision (Paul Bettany). But as the series went on, the show became less of a riff on old shows and more of a doleful dissertation on grief. Those ‘shows within the show’ that Wanda was imagining, sitcoms that she and Vision lived in, were creations of a widow clinging to the cherished memories of her A.I. boyfriend.

THE FALCON AND THE WINTER SOLDIER is just as meditative too. What could have been a mere actioner with two macho stalwarts from the CAPTAIN AMERICA movies premieres with an episode that suggests the series will be a somber piece exploring the mantle of heroism. It’s an audacious start to this new show created by Malcolm Spellman and a welcome start for those who may have worried that this material could have been far too jingoistic.

The show focuses on two cronies of Captain Steve Rogers (Chris Evans), forced to start their worlds anew after their friend’s passing. Not surprisingly, Sam “Falcon” Wilson (Anthony Mackie) has chosen not to pick up the mantle Steve laid down for him. Instead, he’s rejected trying to fill Captain America’s well-heeled boots for now and stayed within his own lane as a flying soldier.  Indeed, the show starts out with him being called in for special duty by the army to prevent a hijacking near the Libyan border.

To stop the terrorists who have commandeered an American army plane, the Falcon leaps out of another American aircraft to try and take it back. Sam flies with aerial derring-do in his super suit and ends up taking out the terrorists and saving the last GI alive onboard in a breathless action set-piece that is worthy of any such big-screen actioner.

The rest of the pilot episode, however, becomes grounded rather quickly in more ways than one. Sam is fraught with inner turmoil as he’s still not recovered from coming back from Thanos’ finger snap five years earlier. He feels at odds with the world, particularly with his family where his combative sister Sarah (Adepero Oduye) has moved on without him in taking over the family boating business in Louisiana.

Mackie has always displayed maturity in his acting, beyond his years, and that serves the low simmer of Sam’s frustrations well in the opening episode. Sam is trying to figure out where he fits in as a citizen, hero, and man in a world that he didn’t expect to come back to.

Meanwhile, his old pal Bucky (Sebastian Shaw) is also a man out of sorts, as well as out of time. He’s as old as Steve Rogers, as you’ll remember, a 1940s soldier captured and brainwashed by the evil organization HYDRA to be a cold-blooded assassin.  Now, the “Winter Soldier” is pushing 100, has no friends, and even repels his psychotherapist (Amy Aquino). His scenes with her are shot using stylized angles to highlight the tension between them, adding some appropriate humor to his crazy storyline. They also throw sarcastic remarks back and forth like they’re in a professional ping pong match. Marvel fills this series with gravitas, true, but they also know when to go for some good laughs.

There might be hope for Bucky’s future via a comely waitress (Miki Ishikawa) from a local sushi restaurant who has eyes for him. Additionally, it’s no doubt that Bucky will get slapped out of his doldrums by a riveting adventure or two with the Falcon that the series certainly has in store. Still, it’s daring that the series started off with both of their lead characters in a Hamlet-like state of inertia. Heck, the premier doesn’t even put the two in a scene together. Pretty unsual.

It’s the creators’ willingness to zig rather than zag as such that gives one great hope for the run of this miniseries. Most fans probably would’ve been fine with the series just being a rollicking adventure, but thankfully, Marvel has more on its mind. The studio is running with their long-form narratives to expand the MCU and delve deeper into the psychology of their well-loved characters.

And while this show seems wholly intent on examining what it takes to be a hero or a soldier in modern times, I’m not expecting THE FALCON AND THE WINTER SOLDIER to become THE HURT LOCKER. The fact that both entertainments can claim Anthony Mackie as a cast member though strikes me as an interesting coincidence. Heavy, isn’t it?

from The Establishing Shot https://ift.tt/3cFcIzq
via IFTTT