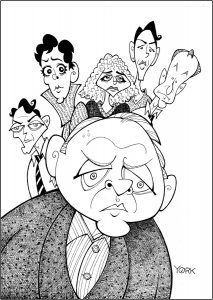 Original caricature by Jeff York of the cast of THE FATHER (copyright 2021).

In the new film THE FATHER, now in theaters and premiering on VOD March 26, Florian Zeller has made an auspicious film debut by adapting his award-winning play for the screen. The Frenchman is not only a superb director of actors, but he shows an intrinsic knack for knowing how to tell a story visually with a sophisticated use of camera movement, editing, sound design, and lighting. Zeller is so clever, in fact, he ensures that the protagonist’s apartment becomes another character in his chamber piece. With all that going for it, is it any wonder this film was my pick for the best of 2020?

However, I don’t want to give away too much more about this film as to ruin all the twists and turns that await you. It’s one of those films where it’s best to not know too much going in. I can tell you that Anthony Hopkins plays a character named Anthony, a long-retired engineer in his late 70’s who seems to be enjoying retirement. In his posh flat, he listens to classical music, is surrounded by books and art, and is visited frequently by his middle-aged daughter Anne (Olivia Coleman).

The only thing that seems to bother him is her plan to move to Paris. She and her boyfriend are leaving London and Anthony behind, and the old man is not pleased. He tries to both cajole and guilt her into staying, but she reminds him that the decision was made weeks ago. Anthony doesn’t remember it that way, and his uncertainty of their discussion sticks in his craw. This is a proud man, an old salt, clearly used to being in charge. But now, it seems, the power may have shifted in his relationship with his child.

Not long after Anne leaves, a testy Anthony turns a corner and discovers a strange man sitting in his living room. He’s shocked and so are we. The amicable man (Mark Gatiss) identifies himself as Bill and assures Anthony that he’s there because this is his home. Anthony is flabbergasted by such a claim and protests vehemently, but we start to wonder what is going on with Anthony’s mind and his world which starts to resemble more and more of a puzzle.

Hopkins has given many brilliant performances on stage, screen, and television, but suffice to say that this may be his finest work ever. Here, he is on screen the entire time and he starts to fall apart, bit by bit, nuance by nuance, and it is a feat that few actors could muster. Hopkins’ face alone tells so much, but his body language does too. At times, he lumbers into the room like a frothing King Lear, and at other times, he stumbles in as a child would searching for his blanket. And the terror he exudes as he becomes less and less sure of himself is palpable. It makes for a tense watch, as edge-of-your-seat involving as the best thrillers.

Other people who come into Anthony’s flat round include Paul (Rufus Sewell), Catherine (Olivia Williams), and Laura (Imogen Poots). Anthony thinks he recognizes them, but he cannot be certain and Zeller puts us smack dab in the mind of Anthony the entire time. He lets us feel as discombobulated as his main characters and his addled mind becomes our experience throughout.

The entire supporting cast is formidable, notably Coleman, who manages to break your heart as her heart breaks for Anthony. (She, along with Hopkins, are considered shoo-ins for Academy Award nominations this Monday). And while this is indeed an actor’s showcase, Zeller lets his below-the-line talent shine throughout too, from Peter Francis’ scenic design to Anna Robbins’ costuming to Yorgos Lamprinos’ editing. Note in particular as you watch the subtle shifts in the apartment’s decor. As art disappears, walls change color, and furniture moves around, can we believe in anything we’re seeing?

This is a formidable character study, a moving dissertation on aging, and a tightly wound thriller in its way as well. Zeller demonstrates incredible filmmaking gifts throughout and I am excited to see what else he will do on the big screen. His freshman effort knocked my socks off, and I think you’ll be gobsmacked as well.

from The Establishing Shot https://ift.tt/3eJbNk6
via IFTTT