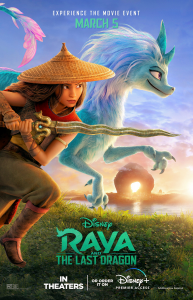 An animated film from Disney is almost always guaranteed box office, so it’s terrific to see the studio pushing the envelope more and more with each new project. RAYA AND THE LAST DRAGON is their latest, and it opens today in theaters and on Disney+ simultaneously. Its adult appeal, like SOUL, is at least equal to its allure for children. The screenplay written by Qui Nguyen and Adele Lim, and directed by Don Hall and Carlos Lopez Estrada, is as complex as most films aimed at adults with a flawed heroine, elaborate action sequences, and gorgeous production design throughout. Granted, it still follows several cliched Disney tropes, but by and large, this film surprises and dazzles for all of its one hour and 54 minutes.

One of the best surprises about the film lies with the character design. Sure, the anthropomorphic critters all but scream “plush toy,” but the adult characters look more like anime or video game warriors. They also look authentically Asian, though Raya’s eyes are a bit too oversized in that mermaid Ariel kind of way.

The plot is a hero’s journey, no surprise there, as Raya (voiced by Kelly Marie Tran), must save her land from an evil, mystical mist that has returned to wreak havoc on her world of Kumandra. Five hundred years ago, the fog went all Medusa on the population, turning almost everyone to stone. Dragons vanquished the entity but most of them were turned to granite as well, save for Sisu, the last dragon of the title. Now, Raya is out to find her as she needs her help to fight the mist.

There are global warming metaphors within the story, as well as pointed commentary about factions of people working against their own self-interests (Ahem, MAGA), but mostly, the narrative mines the rich vein of the hero’s journey and becomes a road picture along the way.

Such tropes as these certainly are not new for Disney, nor is Raya’s backstory of losing her mother (check), a sassy beast in Sisu, voiced by Awkwafina, becoming the moral center (check), and a cadre of adorable animals acting like the slapstick Marx Bros (check). What is wholly fresh are the stunning action set-pieces that would feel right at home in a Steven Spielberg film, along with expansive world-building that would make James Cameron green with envy.

Additionally, Disney charts new territory with a heroine who is one of the studio’s surliest, and a population onscreen that isn’t admirable or without sin. Most of them are selfish warmongers, violent sorts acting out in their own self-interest. (Are we sure that the mist isn’t actually God sensing a need to start over by stopping the planet’s inhabitants in their tracks?)

Yet, as Raya and Sisu pick up others to join their trek, humanity starts to show a better face, one of belonging and tolerance. The diverse group who join her include street urchin Boun (Izaac Wang), gruff giant Tong (Benedict Wong), and a gaggle of con artists headed by a thieving toddler named Noi (Thalia Tran). Despite all the differences, they find commonality in their cause.

Kelly Marie Tran gives a remarkably nuanced voice performance as Raya and is matched by Gemma Chan doing stellar work as her nemesis Namaari and Daniel Dae Kim as her protective father. Awkwafina adds so much modernity to the whole shebang, you’ll almost forget this is essentially a Medieval period piece. Every element below the line is exquisite, too, particularly the vivid score by James Newton Howard.

Perhaps someday, Disney will break their heroines out of the tried-and-true warrior mode and not rely on chubby animals to ensure a family audience. Still, if their animated fare continues to play as this adult, I’m fine with their checked boxes. RAYA AND THE DRAGON isn’t quite the top tier of Disney, but it’s a fascinating character study, a thrilling adventure, and a feast for the eyes.

from The Establishing Shot https://ift.tt/3epjxrJ
via IFTTT