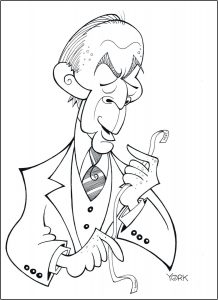 Original caricature by Jeff York of Christopher Plummer in ALL THE MONEY IN THE WORLD. (copyright 2017)

Christopher Plummer, the legendary actor of stage, screen, and television, died February 5 at the age of 91. He did so many big roles and so many notable films in his last two decades that it seemed as if he would go on forever. I remember thinking so when I saw him dominate a healthy portion of the thriller KNIVES OUT just two short years ago. The man didn’t seem to be any less sharp, sly, or intimidating than he was decades earlier. Plummer was still handsome, too, cutting a dashing figure with his intense eyes, strong features, and masculine timbre. As he aged, it seemed that Plummer simply grew more and more brilliant on film.

In fact, if you look at the resume of his six-decade career, the case could easily be made that his best work happened after his 65th birthday, a time when most people retire. Consider these standout films where he was a crucial cast member, all done after 65: DOLORES CLAIBORNE, 12 MONKEYS, THE INSIDER, A BEAUTIFUL MIND, SYRIANA, INSIDE MAN, UP, THE LAST STATION, BEGINNERS, THE GIRL WITH THE DRAGON TATTOO, REMEMBER, THE MAN WHO INVENTED CHRISTMAS, and KNIVES OUT.

As it was for most everybody, my very first recollection of Plummer was as the iconic Captain von Trapp in 1965’s THE SOUND OF MUSIC. He continued in many notable films and TV roles after that, but most of his career through the next four decades was devoted to the stage. He appeared on Broadway plenty and won two Tony Awards. (I saw him in his award-winning, one-man show BARRYMORE.) Plummer was also a regular member of the Stratford Festival in Canada over the decades. ( I saw him play an astounding Prospero in a 2010 production of THE TEMPEST there. Wow.) He also did oodles of stage work in London and many thought he was English because of his high-brow manner and tone. He wasn’t; Plummer was born and raised in Toronto.

I remember seeing him in the TV miniseries of Arthur Hailey’s bestseller THE MONEYCHANGERS in 1976 where he essayed an oily, albeit charming banker. Plummer won an Emmy for that role – Best Actor in a Limited Series – and as he did more and more TV and film work, he broadened his reach, furthered his reputation, and won slews of awards in the process. He was now miles away from von Trapp and often heralded as the “Canadian Olivier”, not to mention heralded as one of the finest actors working across the industry.

Plummer played all kinds of roles, some a million miles from Von Trapp. He scared the bejesus out of audiences worldwide when he took on the role of a sinister bank robber in 1978’s THE SILENT PARTNER. His purring, pervy cat of a thief taunted Elliott Gould’s mousy bank teller whom he robbed and it made for great thrills and chills. Plummer was positively terrifying in the role of the vicious Harry Reikle, a con who wore eyeliner and had a penchant for pummeling prostitutes. The role helped Plummer beat any ideas of typecasting after that and was on his way to play all kinds of roles on film. He would play cops and killers, the rich and poor, Americans and foreigners, even a Klingon.

As a Sherlock Holmes fan, I loved how he turned the character on its ear while being true to the Conan Doyle tenets in 1979’s MURDER BY DECREE. In that film, Holmes was smart and refined, certainly, but he was also boisterous, a man of action hunting down Jack the Ripper, and a respectful, faithful friend to Dr. Watson (James Mason). Only Plummer could hug his companion after a night at the opera one moment, chuckling at his friend’s wit, and then dress down Parliament stridently the next. (To see him cut John Gielgud’s stuffed shirt to size was a vivid sight to savor!) To this day, Plummer’s take on the role is considered to be one of film’s best interpretations, second only to Basil Rathbone himself on the big screen.
In 1999, at 70, Plummer hit a career zenith when he won a slew of awards for playing newsman Mike Wallace so definitively in THE INSIDER. Many thought he would win the Oscar for Best Supporting Actor that year, but the Academy foolishly overlooked him for even a nomination. They would not make that mistake again, and nine years later, he received his first nod for playing Leo Tolstoy in THE LAST STATION. Plummer was 80, and it started a final decade of films that was breathtaking in its accomplishments.

Plummer’s role as a widower who comes out of the closet at the ripe old age of 70 in 2011’s BEGINNERS finally got him his Academy due. His warm and witty performance swept almost every Best Supporting Actor award that year, culminating with the Oscar. On stage, Plummer memorably quipped that he’d been chasing the prize since he was a baby, noting the award was only a year older than he was.

After that, Plummer played some lead roles, like in the Nazi-hunting thriller REMEMBER in 2015. It’s a genuine sleeper in which he’s onscreen virtually the entire time. Mostly though, Plummer took on plumb supporting roles like that of one of Muhammed Ali’s lawyers in MUHAMMED ALI’S GREATEST FIGHT in 2013. Plummer was also heartbreaking playing the rich magnate who hires Daniel Craig to find his granddaughter in THE GIRL WITH THE DRAGON TATTOO (2011).

His role as J. Paul Getty in the 2017 film ALL THE MONEY IN THE WORLD is as incredible for what happened onscreen as off. Of course, he is tough, chilling, and snide in the role of the ruthless billionaire, but the behind-the-scenes drama was just as compelling. Plummer was called in November to replace Kevin Spacey in the role after the film was already in the can, ready for release. The studio, however, delayed the picture, wanting Spacey to be excised entirely from it after news broke of his horrendous sex scandals. In order to give the film a fair chance at the box office, it was deemed “necessary surgery.”

Thus, director Ridley Scott had to do re-shoots Thanksgiving week with Plummer in the part as he originally wanted. (The studio wanted a bigger star. Fools.) So, in less than a week, Every Getty scene was shot anew with Plummer and the other actors. It became one of Hollywood’s most Herculean efforts as Plummer’s scenes were worked into the finished film within days. The film was completed in record time and opened a month later on Christmas Day. For his stunning portrayal in ALL THE MONEY IN THE WORLD, Plummer was acknowledged the world over for his stellar contribution and received all kinds of accolades including Best Supporting Actor nominations from the Golden Globes, BAFTA, and the Academy.

Plummer laughed off all the fuss of shooting it, saying that it was the fastest he ever went from being hired to collecting awards for a part. He was always self-effacing like that, one of his many charms, and if you ever get the chance, read his autobiography IN SPITE OF MYSELF: A MEMOIR. It is quite simply the most honest, funniest, and satisfying a Hollywood biography as there’s ever been written. That’s not at all surprising, given how incredibly clever and fascinating Plummer is in any interview or red carpet appearance.

Plummer’s passing is a giant loss for the entertainment industry. His career covered the big and small, comedy and tragedy, heroes and heels. And he did more to define a career in his last 25 years than most do in their first 50. I thought he would live forever in a way, and of course, on film, he will. I can’t wait to figure out which of his wondrous performances I’m going to watch first.

from The Establishing Shot https://ift.tt/3tt8til
via IFTTT