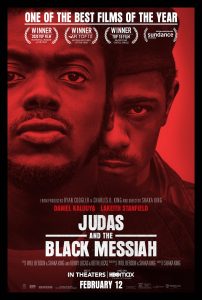 While watching JUDAS AND THE BLACK MESSIAH, the brilliant new drama about the events that led to the shooting death of Black Panther Party leader Fred Hampton in 1969, you’re bound to get worked up. It’s not only a searing drama, tautly told, but the historical events show the FBI and Chicago PD at their most complicit. Even harder to take is how little things seem to have changed since that terrible time. The film not only chronicles a horrid chapter in USA history, but it throws the book at the systemic racism that is still permeating our nation today.

Writer/director Shaka King and fellow screenwriter Will Berson (with a story credit going to Kenny Lucas and Keith Lucas) tell the true-life events involving Hampton (Daniel Kaluuya) and his relationship with FBI informant William O’Neal (Lakeith Stanfield). In 1966, O’Neal was a petty criminal caught by the FBI and, to avoid prison, he was coerced into becoming a mole for agent Roy Mitchell (Jesse Plemons). O’Neal’s assignment was to infiltrate the Black Panther Party in Chicago and keep the feds abreast of all their activities, particularly Hampton’s comings and goings.

O’Neal reluctantly goes along with it, and his awful position imbues every scene with palpable tension. He’s a sitting duck for both sides, in danger every waking moment. But the more time he spends with Hampton, the more he comes to believe in his cause. Hampton’s concerns for the black community lead O’Neal to worry about a greater good and not just invest in saving his own skin.

In Hampton, O’Neal finds a friend, brother, and moral example. After all, Hampton created the Rainbow Coalition in Chicago and worked tirelessly to end gang violence throughout the black community. He was also a charismatic and an incredible orator – focused, always engaged, and brutally honest. He could be exceedingly macho, but he was also compassionate, devoted to his community, and loving towards his girlfriend Deborah Johnson (Dominique Fishback). Kaluuya gives a powerhouse performance as Hampton, bringing all of the man’s vivid traits to life. He even gets the very specific cadence of Hampton’s oratory down pat.

As Hampton’s clout rises in the story, it enrages FBI head J. Edgar Hoover (Martin Sheen, playing distinctively against type). Hoover lets his racism ooze out of every pore, targeting the Panthers for numerous incidents of violence and calling on Chicago Mayor Daley’s corrupt police to carry out his bidding. (Chicago certainly is having a bad year at the movies as Daley and the police come off just as badly in THE TRIAL OF THE CHICAGO 7.)

Hoover is a monster, running roughshod over everyone, including Mitchell. One of the most chilling scenes in the movie shows Hoover badgering his subordinate about what he’d do if his daughter brought home a black boyfriend. Mitchell is flummoxed, telling him she’s only an infant. But when Hoover presses the point, Mitchell caves and assures his boss he’d never let a black man into his family. Plemons and Sheen make the scene crackle with tension and despite a bad putty nose, you almost forget that Sheen usually plays admirable POTUS’s.

As the story builds to its murderous inevitability, O’Neal tries to do what he can to stem the tide, but ultimately he’s not strong enough. It’s a credit to Stanfield that we feel such sympathy towards this character despite such obvious flaws. His O’Neal is never likable, but he is pitiable.

While watching all of this play out, the parallels to today become as clear as crystal. George Floyd’s murder by the Minneapolis PD, the Black Lives Matter protests rising, Trump’s racist fueling of the divide all through his term…the connections are so painfully obvious King doesn’t have to do a thing to underline them. Instead, the skilled director concentrates on wringing tension out of virtually every scene and keeping us on the edge of our seats from the first minute to the last.

JUDAS AND THE BLACK MESSIAH is not an uplifting film, though in its way it is inspiring. The fight goes on, and the fact that movies like this get made remains encouraging. Addressing our nation’s failures, either through political discourse or art, is a necessary step in stopping the cycle of racism from continuing endlessly.

from The Establishing Shot https://ift.tt/3apULnr
via IFTTT