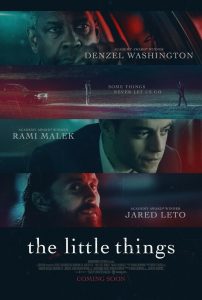 There’s an excellent idea in the middle of THE LITTLE THINGS, the new thriller from writer/director John Lee Hancock. It concerns what would happen if the police had a suspected serial killer in their grasp but little evidence outside of the circumstantial kind. How would they nail him? Could they lay a trap in the interrogation room? Trip him up with mind games? What? Unfortunately, the film never maximizes such dramatic potential. Instead, it gets bogged down by a host of little things, distractions that take away from the procedural. The film veers off into extended riffs on inner-office politics, red herrings that go nowhere, and the main character’s back-story that constantly threatens this newer story. There’s a lot going on here with far too little of it landing properly.

The film starts promisingly enough with a young woman being terrorized by a sedan following her down a lonely California road. She manages to escape, but the film then loses that story thread for well over an hour. Instead, we get oodles of screen time devoted to setting up our tragic lead named Joe Deacon (Denzel Washington). He’s a burnt-out Kern County deputy sheriff who used to be a big-time LAPD detective until a tragic event sent him packing. The film plays coy with that story, refusing to fill in the details even though everyone onscreen talks about it endlessly.

Deacon ends up in LA again and quickly ingratiates himself into the new serial killer case consuming the department because it reminds him of the one that he was involved in years ago. But here again, Hancock distracts with too many minutiae. Deacon spends an awful lot of time trading veiled insults with his ex-partner Carl (Terry Kinney) or waxing nostalgic with his cop buddy Sal (Chris Bauer). Deacon even flirts with forensic pathologist Flo (Michael Hyatt) while she’s performing an autopsy, but such sexual longing doesn’t add much to the mix.

Deacon meets the department’s new hotshot, Detective Jim Baxter (Rami Malek, at maximized quirkiness), and it takes them a long, long time to join forces as we know they inevitably will. Baxter spends too many scenes calling Deacon “Columbo” or “Kojak”, making one wonder why he’s so petty and how a thirtysomething knows so much about 70s cop shows. Eventually, he and Deacon bond and blather on and on about life lessons, but Hancock still refuses to fill in the blanks about Deacon’s big life lesson until the end of the third act. It’s tremendously frustrating.

Hancock did deft, tight work in THE BLIND SPOT and SAVING MR. BANKS but has difficulty keeping his story elements gelling here. Deacon is a wise sage one moment and a crackpot chatting up nude murder victims the next. Baxter is an intelligent wunderkind in one scene and then naively gullible in the next. And Hancock can’t decide if he wants his cop lingo to have a lengthy Tarantino-esque quality to it or sound more like terse James Ellroy prose.

Jared Leto tries to give a layered performance as Albert Sparma, the chief serial killer suspect, but he’s a bit broad. Greasy hair, a pronounced limp, unblinking Manson eyes…all that’s missing are walls scrawled with blood. That scene where Deacon and Baxter interrogate Sparma at the police station could have been incredible if it concentrated on cat and mouse tactics. Instead, it gets bogged down by having Deacon hiding behind the glass at first, then losing his cool when he joins the questioning. Ultimately, he ends up grabbing Sparma by the crotch to see if the crime scene photos turn him on and it’s so ludicrous, it’s laughable. Even composer Thomas Newman’s elegant, haunting musical cues can’t gloss over such silliness.

In the third act, the film becomes almost irretrievable. The story feels like it’s missing scenes. The editing feels choppy as if cut to save time. Baxter makes several wildly foolish decisions. The other cops become conveniently absent from the finale. And that girl who started things out is never heard from again. Sure, Washington adds gravitas to every scene, but as great as he is the film does him no favors by having him talk to corpses. Hancock has created a film with a lot going for it, but alas, there are too many little distractions and storytelling mistakes preventing it from being the big success it should be.

from The Establishing Shot https://ift.tt/2MdvBAs
via IFTTT