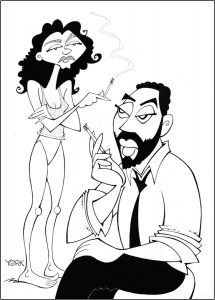 Just how you respond to MALCOLM & MARIE, the new drama from filmmaker Sam Levinson might depend upon how comfortable you are seeing lovers argue onscreen for two hours. To anyone who’s been in a turbulent relationship, the tenor of their fight will sound achingly familiar. Malcolm (John David Washington) and Marie (Zendaya) work in the film industry and are full of passion for each other and their craft. However, their issues with both are just as vivid. And even if it’s difficult for you to laugh at knock-down, cut-to-the-bone quarrels, you should be able to laugh at how they savage Tinsel Town. Levinson and his stars have brought to superb life a searing takedown of the thin line between love and hate in relationships and in Hollywood. It’s a rollicking, stinging achievement.

Levinson is nothing if not a provocateur. He’s the son of Oscar-winning filmmaker Barry Levinson (RAIN MAN, DINER), who’s inherited his dad’s artistry. Sam is as candid a person as he is a filmmaker too, not mincing words to the press when chronicling his past battles with addiction. His HBO TV series EUPHORIA is a brilliant and candid presentation of teenage addiction itself. The show won a well-deserved Best Actress Emmy for Zendaya this past September, and Levinson has again turned to his star for this two-hander. She and Washington shot it in secret during the nationwide lockdown this past summer and now its release is getting all kinds of Oscar buzz. After 15 minutes of viewing, you’ll know why.

Both actors are astounding as they bring their complex characters to life, revealing layer after layer with each new minute. Levinson’s written dialogue for them in the WHO’S AFRAID OF VIRGINIA WOOLF vein. Like the characters of George and Martha that Edward Albee created for his 1962 play, Malcolm and Marie fight furiously and often hilariously. They’re both tremendously insecure people, just like Albee’s couple, and serve as perfect foils for each other, as well as lovers. M & M are no sweet treat as they toss vicious words around like they’re in a verbal cage match.

The event that gets them so worked up is the movie premiere of his new movie they’ve just returned from. They enter the gorgeous rental housed on the Pacific and anxiously await critics’ reviews late into the evening. The film Malcolm wrote and directed is a raw portrait of a young woman’s struggle with drug addiction and it’s based substantially upon Marie’s checkered history. Using her greatest humiliation for public fodder doesn’t sit well with Marie and Malcolm compounds her resentment by failing to thank her in public remarks delivered after the show.

Malcolm minimalizes her angst because he’s mostly worried about the reviews. Even though various critics have told him they loved the film to his face, he questions their integrity and doubts their honesty. This plot point allows Levinson to not only pimp the flagrant insecurity in the town but slam the critics whose approval he is hungering for as well. It’s amusing on a number of levels, as are so many elements in the film.

Marie has other complaints about her egotistical boyfriend too and soon starts cataloging them for him. Not to be outdone, Malcolm shares his own quibbles with her, and soon enough they sound like mortal enemies, not impassioned lovers. At their full voice, they start wounding each other with brutal honesty and secret revelations. And it all occurs while they slowly but surely undress through the evening, baring their bodies as well as their teeth.

When a rave review comes in, the fragile Malcolm goes off on it. Washington has a field day going on his character’s rant, raking a female critic over the coals for her criticisms. She’s not only accused Malcolm of exploiting race in parts of the film, but sex as well by including scenes of gratuitous nudity. As Malcolm bellows, scoffs, and admonishes the opinion, the actor makes the rant both terrifying and hilarious.

Marie exacerbates things further by agreeing with the journalist’s complaints and it takes their carping to a whole new level of destruction. Levinson also adds layers of subtext by having her deliver all of her arguments henceforth dressed in a form-fitting T-shirt and panties. He’s not only committing the same sexist sin as Malcolm, but he’s commenting on it too. It’s so meta, it’s almost beggars belief.

Like the role of Rue in EUPHORIA, Zendaya here is playing a thoughtful and moral character who also happens to have been a junkie. Her Rue is mostly quiet and introspective, but as Marie, Zendaya really lets it rip and she’s phenomenal. Her Marie excoriates with relish, demonstrating that her character is not only one formidable foe, but that Zendaya is one of the very best actresses working today.

Despite all the bile hurled between them, these two tragically insecure souls still manage somehow to remain likable. That’s because they’re sensitive sorts, and both performers know how to showcase vulnerability in their body language no matter what bile is spewing forth from their mouths. Watching Washington yell at his lover while gulping down heaping spoons of macaroni and cheese is one of the funniest bits on screen this film season. And seeing Zendaya soak in the tub and tear up as Malcolm compares her to other lovers is simply heartbreaking. It’s a film that excels at both extremes of comedy and tragedy.

MALCOLM & MARIE is beautifully filmed in black and white by Marcell Rev and scored for maximum tension with throbbing synth sounds by Labrinth. Still, this film is all about character and words. The film can be hard to watch but it’s utterly recognizable to anyone whose love affair and careers have been fraught with obsession. All lovers will recognize themselves in the piece. And for those in Hollywood, the film is a ruthless mirror.

from The Establishing Shot https://ift.tt/3ptRqdm
via IFTTT