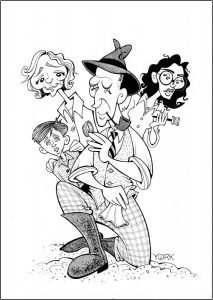 Sometimes a film sneaks up on you, unspooling its story slowly and steadily, finding the drama in actions not taken versus those that are, finding the revelations in words unspoken versus those that are broadcast loudly. THE DIG is such a film, a period piece about unearthing buried treasure in 1939 England as the nation lurches into WWII, but it’s really about unearthing feelings buried due to British propriety and its suffocating caste system. The film plays like a gentle, sly novel, taking its time shading in its characters and stressing the requisite story beats. It’s as delicate as the 7th Century artifacts discovered in the story and a valuable find if you’re looking for smart, adult fare this weekend.

The new period piece, directed by Simon Stone and written by Moira Buffini, concerns two people on the opposite sides of that caste system, brought together by curiosity over an ancient burial ground. Carey Mulligan plays Edith Pretty, a well-off widow who is sitting on a plot of land that she suspects holds buried treasure. The large mounds in her green acres tend to hold crypts of visitors from past centuries, and she’s curious to know if any riches were buried with them. Pretty doesn’t need the money, of course. For her, it’s more of the pride of finding something important, a need she has since her husband died and she’s feeling alone and unappreciated.

She turns to Basil Brown (Ralph Fiennes), a local excavator, with a passion for archeology such as her. He’s more skeptical about what might be underground, but he agrees to do it for 2 pounds a week. (Ah, period pieces.)  Together, Brown and Pretty forge an odd-couple relationship, one as unique professionally as it is personally. As they work together, with Brown moving onto her land to be close to the dig, they find they share a subtle dignity and sadness around the “might-have-been’s” in their histories. Pretty also appreciates Brown for the stand-in father figure he presents to her impressionable son Robert (Archie Barnes). The boy is obsessed with Buck Rogers and he views Brown as an explorer of a similar stripe.

Brown cannot love Pretty, of course, despite their chemistry and belief system, as he is working class and she’s a one-percenter. He’s also married, albeit in a relationship apparently platonic, so the obstacles cannot be cleared away as easily as the soil he’s digging up each day. Nonetheless, Brown and Pretty grow close, and bond all the more after discovering the ruins of an ancient ship buried under the dirt. It’s their baby if you will, and they strive to stave off the pompous interference of the British Museum authorities who descend upon Pretty’s property after the discovery.

Fiennes and Mulligan are subtly endearing as the unrequited Brown and Pretty, saying oodles with their hesitations and pauses. Buffini’s script never underlines any feeling too blatantly, and Stone knows how to let the actors’ faces say pages of dialogue. Still, Buffini gets in some very good (ahem) digs at the British patriarchal system. She populates the story with a few stuffed shirts but wisely doesn’t make them too villainous. The caste system is bad enough already.

Instead, the film introduces a slate of secondary characters in its second hour that helps the film zig in different directions, playing as tangential chapters that underscore the story’s themes and stakes. The B story is another one of unrequited love, this time a triangle between the married archeologists Stuart and Peggy Piggott (Ben Chaplin and Lily James), brought on board to help them dig, and Pretty’s photographer friend Rory (Johnny Flynn). He’s roguish and handsome, everything Stuart’s pickled pill isn’t.

Peggy echoes Brown’s predicament. She too is an outsider, a female scientist in a decidedly male profession. Additionally, the better life partner is staring her right in the face, but propriety and station wholly interfere. Watching James, still gorgeous under her character’s ratty ‘do and oversized glasses, try to seduce her closeted husband, makes for some gentle comedy in the piece. (Someday, hopefully soon, a filmmaker will cast her in a big, gorgeous role that this promising young actress deserves. Is Kenneth Branagh the only director who realizes just what a Cinderella James is onscreen, even when covered in soot?)

In addition to the strengths of the film’s acting and pointed political commentary, the movie has a stirring score by Stefan Gregory, exacting production values by Maria Djurkovic, and costuming that says as much about the characters as their dialogue. I was especially amused by how the diggers still dress well, with Brown wearing a tie and vest even when he’s digging in the rain. We should all have such respect for our craft.

Mulligan is having quite a moment with her award-worthy turn in 2020’s PROMISING YOUNG WOMAN and now with this early 2021 release. She is only 35 but plays matriarchs very well, even though the real-life Pretty was a woman in her 50’s. And Fiennes is a delight, drolly amusing throughout without ever straining to be so. Indeed, THE DIG manages to be a clever and enthralling film without seeming big. Its strength lies in its modesty, and that in itself is quite the find in any movie season.

from The Establishing Shot https://ift.tt/3qMKKHE
via IFTTT