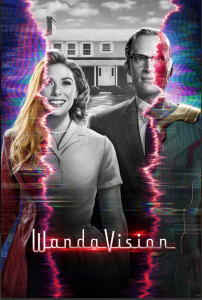 Marvel Studios’ announcement that it was developing a slate of online programs for Disney+ suggested two groundbreaking landmarks. First, that the Marvel Cinematic Universe (MCU) was branching out into series television, and two, that the line between TV and film was now becoming blurred more than ever before. For years, scripted series have seemed more and more like extended movies, and now with the MCU continuing film narratives on TV, there seems to be little difference other than the size of the screen. And any fears that the MCU might just be blurring those lines to milk their franchise cash-cows should be quickly hushed after watching the first three episodes of WANDAVISION that were available to critics for screening. This first series is terrific, startling in the bold risks it takes, and one that will leave you breathlessly wondering where this crazy show is going.

If you’ve seen the previews for WANDAVISION, you’ll know that the series takes its name from the Avengers’ romantic coupling of Wanda and Vision, along with its self-referential nod to being a TV show. Wanda Maximoff (AKA The Scarlet Witch) is a young, mutant with sorceress abilities to alter reality such as time, space, and movement, and Vision is an android created by billionaire Tony Stark (AKA Iron Man). That these two should fall in love is something you’d have to see to believe, but the Avengers movies made the duo into a delight, and actors Elizabeth Olson and Paul Bettany displayed terrific chemistry together.

They bring the same banter from the movies into their new TV world, and what a “TV world” it is. In the show, the two characters seem to be locked in a parody of sitcoms from the ’60s, a veritable recreation of THE DICK VAN DYKE SHOW. The set and costumes come conjured straight out of Carl Reiner’s legendary sitcom, not to mention WANDAVISION is also shot in black and white as well. There’s even a too-loud laugh track. But the more you watch it, the more something seems off in this ersatz world. Very, very off, in a compelling sci-fi kind of way.

For starters, why have these two been placed in such a setting? Why is the acerbic and moody Wanda suddenly playing a cliched housewife, dolled up so fashionably that it would make Barbara Billingsley jealous? Even more bizarre, what is Vision doing dressed up in a ’60s sitcom dad cardigan and tie? It kind of works when he looks like Paul Bettany, but when Vision appears as his robotic self, it seems nuts. Both Olson and Bettany play such schtick very well, giving it just the right satiric edge as they spar affectionately over broken dinnerware and twin bed sleeping arrangements.

Helping their sitcom dreamscape come to life are various stock characters from the world of ’60s television as well, including a nosy neighbor (Kathryn Hahn), a gruff boss (Fred Melamed), and a wise-cracking girlfriend (Teyonah Parris). Yet as each of the first three episodes ends, both Wanda and Vision start to rebel against their onscreen personas, realizing in some way that they’re playacting, and that someone is watching them and controlling the dials.

The show seems to be not so much a parody of ’60s sitcoms as a riff on THE TWILIGHT ZONE television series or THE TRUMAN SHOW movie. Indeed, someone is definitely watching them, and as the first three episodes play out, more and more of the illusion around Wanda and Vision starts to crack. Suddenly, and inexplicably, Wanda is pregnant, the supporting players seem to know more than they can tell the leads, and even the show turns into a full-color parody of ’70’s sitcoms with the third episode. (The set screams THE BRADY BUNCH, right down to the modern staircase ascending upstairs.)

Clearly, show creator Jac Schaeffer has something very sly up his sleeve, and who knows if this is all some sort of experiment the two superheroes have been placed in by a cosmic villain like Thanos or an Earthly mischief-maker like Stark. Suffice it to say, WANDAVISION is cheeky fun, riffing on sitcom tropes, the MCU, fish-out-of-water stories, and yes, Rod Serling’s moralizing show cautioning the audience about both the dangers of society and Big Brother. It works as satire, sci-fi, and even a mystery, one that will likely be revealed more and more as the series goes on. I intend to watch every episode. I just wish that Disney dropped them all at once, so I didn’t have to wait.

from The Establishing Shot https://ift.tt/2N0eIsV
via IFTTT