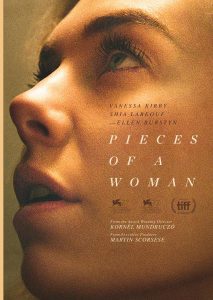 Director Kornel Mundruczo’s latest is entitled PIECES OF A WOMAN, and it feels more like pieces of a movie, not a full film. The story of a woman’s grieving after a family tragedy contains many incredible moments, some scenes as searing as anything put on screen in 2020. Still, ultimately the story doesn’t add up to nearly as much as it should. It leaves essential scenes out, short-shrifts key characters, and swings back and forth between too much dialogue or not nearly enough of it. Because of such shortcomings, this family drama doesn’t carry the emotional wallop it should and ends up as one of the biggest missed opportunities of the film year.

It starts strong enough, pulling us right into the story of Martha (Vanessa Kirby) and Sean (Shia LaBeouf) as they plan for their baby’s birth at home. He’s a working-class Joe, chattering non-stop and trying to amuse his worried wife. Martha’s demeanor suggests an entitled upbringing, and the difference between the two provides intriguing tension in their early scenes together. Then, Martha’s water breaks in the kitchen, and they scramble to call their midwife to assist in the immediate labor.

Unfortunately, the midwife is predisposed so Martha and Sean must call Eva (Molly Parker), their back-up. After she arrives, Mundruczo proceeds to create a virtuoso scene with the three of them. Appearing to all be done in a single take, the real-time drama plays out as the trio goes from nervous excitement to building panic to outright dread. The audience is a fly on the wall, experiences every moment of it, and the stress is palpable.

That scene is one of the best in a film all year, realistically acted and meticulously shot. It creates more nail-biting tension than in a dozen thrillers. But once the scene ends, the film starts losing its way. Kata Weber’s script starts to traffic in contrived plot twists, incorporates some over-written character monologues, and keeps Martha’s central character too enigmatic for far too long. She’s the central character, and rarely can we get a real bead on what’s going on with her.

One plot twist that feels completely wrong is a trial set to punish the midwife, which could send her to jail for five years. From what the story conveyed, the tragedy was not her fault. Why is so much about the aftermath given over to a cliche straight out of a legal drama? At the very least, where are the scenes that would explain how Martha and Sean arrived at such extreme legal actions? It seems more like a writer’s plot device than a genuine next step for their grieving process.

The film suggests that Martha’s dominating mother, Elizabeth (Ellen Burstyn), pushed them into the lawsuit, but where are those scenes as well? Granted, one can imagine the controlling matriarch Elizabeth bullying them into such actions, considering her style is full of withering putdowns and disapproving looks, but why are key parts of the aftermath unrealized in the storytelling?

From there, Weber’s script becomes more and more confounding. A surprise affair comes out of nowhere with little rhyme or reason. Coincidences pile up. And a family Thanksgiving gets bogged down with sudden revelations, not to mention an irritatingly endless discussion about the rock band The White Stripes’ origins. And through it all, the story struggles to make sense of Martha. Is she furious at the midwife, or are her gripes more with her smothering mother, her man-child of a husband, or even herself?

Vanessa Kirby is a terrific actress, but too much of what’s she given to do here requires her merely to shuffle about glumly and stare out of icy windows upon the wintry neighborhood. Indeed, Martha seems to be pieces of a woman, and perhaps that’s the point. Still, as the central character, she feels arms-length. It’s a shocking tonal shift compared to that first act, which grabs us by the throat and puts us right in the middle of that doomed delivery.

The worst of the missed opportunities occurs with the film’s complete ignorance of Eva after that first act. She could end up in jail, yet the screenwriter and director never let us hear from her again. Where are the pieces of that woman, her feelings, her grief? Like Sarah Snook’s smug prosecutor, a half-dozen peripheral characters get more screen time, and it just feels wrong.

Ellen Burstyn gives a great performance as the stern Elizabeth, but her strident monologue berating Martha after Thanksgiving dinner feels like a scene from another movie altogether. The same goes for many of Sean’s scenes in the aftermath. Even though LaBeouf gives it his all, the film seems content with placing his character in an infidelity subplot that turns Sean into an unsympathetic jerk.

At times, PIECES OF A WOMAN plays like a foreign arthouse drama, chock full of symbolism: numerous shots of doorways, barren streets, and discarded knit caps. Such moves struggle to jibe with that riveting first 30 minutes of cinema verite. The film pieces together all of its contradictory notions, but its sum is never quite as good as its various parts.

from The Establishing Shot https://ift.tt/3oe2if1
via IFTTT