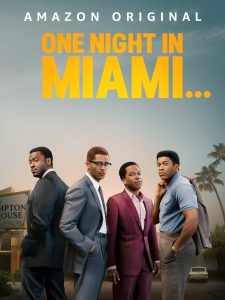 Historical faction films are always fascinating because they assume that history isn’t quite compelling enough as written. In the sub-genre of historical films, famous figures are placed in fictional settings to create “What If” stories that create a sense of the fantastical or wishful thinking. Quentin Tarantino is one of the most famous filmmakers who did it when he offed Hitler and the Nazi command in 2009’s INGLOURIOUS BASTERDS. Playwright Kemp Powers did it in his 2013 play ONE NIGHT IN MIAMI, too, showcasing a fictional get-together of four of 1964’s most famed black men: Malcolm X, crooner Sam Cooke, boxer Cassius Clay, and NFL fullback Jim Brown. Kemp placed them all in a Miami motel suite on a hot summer night after Clay beat Sonny Liston to become the heavyweight champ. There, he had them debate Civil Rights and muse on their celebrity, giving voice to these four in a whole new way. Now, actress Regina King has made her directorial debut bringing Kemp’s play to the screen, and the fact is it’s quite wonderful.

At the time, three of the four were undoubtedly controversial figures, outspoken critics of America’s systemic racism. Cooke (Leslie Odom, Jr.) wasn’t, as his songs were about love, not protest. Brown (Aldis Hodge), despite his record-breaking runs on the football field, was a polarizing figure, particularly in the South. Why is evident in the first scene where he’s gently scolded for his controversial statements by an old family friend (Beau Bridges) before being refused entry into the house for his pigmentation. It’s a shocking scene, yet it explains Brown’s rage.

Malcolm (Kingsley Ben-Adir) revels in the controversy he’s creating whenever he appears or speaks, refusing to coddle even those whites supporting Civil Rights for the centuries of abuse preceding the movement. Because he was so outspoken about it, it was dangerous for Malcolm to go anywhere, and the film shows him traveling with a Nation of Islam security detail in tow.

The three gather to watch the 22-year-old Clay (Eli Goree) emerge victoriously from his bout, then join him for a celebratory party at a local motel. The good times are shared among these friends, along with booze and ice cream, but it isn’t long before Malcolm puts his agenda front and center – namely converting Clay to the Islamic religion and chiding Cooke for not embracing his cause.

Malcolm and Cooke stand in opposite corners on how best to proceed, you see, with the crooner feeling he’s doing his best by succeeding so demonstrably in the white man’s world. The civil rights leader doesn’t see it that way and shames him continually for not doing enough to fight the power. Their heat adds to the humid night in Florida, and the temperature of all four rises as the night goes on.

The four leads capture their subjects brilliantly: the mind, body, and soul of each. Ben-Adir has the towering performance of Denzel Washington in Spike Lee’s MALCOLM X from 1992 to contend with, but he makes the role his own with his wiry intensity and rat-a-tat delivery. Odom shines brightly, too, as the quieter and less combative Cooke, working wonders with pauses and subtle reactions to the outsized others.

Goree is a hoot as Ali, capturing the champ’s bombast and playfulness. Bounding around the motel room like a kid on summer vacation, he is the easiest to like in the bunch. The hardest to embrace is the morose,  bitter Brown. Hodge delivers his lines under his breath, essaying Brown’s contempt with almost every utterance. Still, the actor manages to make Brown likable at times, especially when he cuts to the truth in his blunt fashion.

King directs well, making all four equals in the show, and moving them about that claustrophobic motel room with ease. She and Kemp open up the play, too, starting with Clay’s victory in the ring. (Michael Imperioli makes a vivid impression there as Clay’s tough-talking cornerman Angelo Dundee.) King also employs trips out of the room to keep stagnation at bay with conversations in the parking lot, at a local store, and even in a bar. Wisely, she sprinkles in scenes where Malcolm converses on the phone with his wife Betty Shabaz (Joaquina Kalukango) to give the proceedings a feminine viewpoint. Betty not only brings out her husband’s warmer side, but she serves as the story’s Greek Chorus.

If there is any issue with ONE NIGHT IN MIAMI, it’s in those historical faction roots. It feels like a play, not just in the limited setting, but in how it’s written. The words being bandied back and forth have a theatricalness to them: big topics turning into big speeches, the way people often talk in plays. Make no mistake, Kemp’s words are powerful, but at times they land too on-the-nose.

Still, ONE NIGHT IN MIAMI is clever, earnest, and moving, all expertly assembled by the multi-talented King. The film is currently playing in select theaters and will have its VOD premiere on Amazon Prime come January 15. It’s a stirring night, and it’s one not to be missed.

from The Establishing Shot https://ift.tt/2JySuNy
via IFTTT