Even though 2020 was an abysmal year, there were still plenty of wonderful films to be enjoyed, even if most of them never appeared in a theater. Of the hundred-some films I watched, there were several standouts, and they will be reflected in my 10 Best List posting soon. Until then, I am going to share my 10 Favorite Images from this year’s films. It’s something I’ve done since the inception of The Establishing Shot, and without further ado, here’s this year’s list. 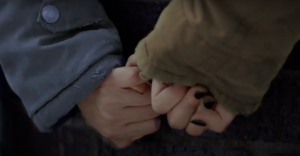 NEVER RARELY SOMETIMES ALWAYS
In this solemn and delicate character study written and directed by Eliza Hittman, pregnant teen Autumn (Sidney Flanigan) heads to NYC with her BFF Skyler (Talia Ryder) to obtain a secret abortion. When the procedure takes all their money, Skyler asks a young man they’ve met if he can help them out. He agrees and takes Skyler to an ATM, but in return, he wants a reluctant Skyler to make out with him on the subway platform. Finding her there, Autumn hides behind a column and gently reaches out to touch her friend’s hand, trying to provide some comfort during this humiliation. It’s an incredibly intimate moment between the two friends, and ironic as well because Autumn’s unwanted pregnancy came at the hands of assault.

THE COLUMNIST
This Dutch dark comedy, written by Dean Windhorst and directed by Ivo van Aart, known as DE KUTHOER in the Netherlands, was my favorite foreign film this year. The story of an earnest newspaper columnist (Katja Herbers) named Femke Boot, who starts killing off her male Twitter trolls, is both a stinging commentary on social media as well as a cheeky revenge tale. Femke can’t resist killing her most antagonist foil right before the launch party for her new book, thus showing up splattered in his blood. The party guests applaud her, interpreting her ‘look’ as performance art, a comment on her book’s subject of internet victimization. Femke seems to have gotten away with murder, and she toasts herself by raising a glass of champagne. 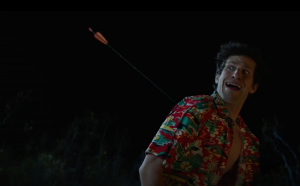 PALM SPRINGS
Nyles (Andy Samberg) acts strange from the get-go of this inspired comedy. He attends a wedding reception at a desert inn brimming with sarcasm. Something happened in the past that has turned him that way, but what? When he hits it off with fellow guest Sarah (Cristin Milioti), they head out to the mountains to have sex. Then, without warning, he’s shot in the shoulder by an arrow. Nyles didn’t expect that, nor did Sarah, nor did we. From there on out, director Max Barkbakow and screenwriter Andy Siara’s film becomes a free-for-all with time, action, and characters revealed to be stuck in an endless loop. Like GROUNDHOG DAY, this farce still manages to feel endlessly fresh, inventive, and shocking, as piercing as that arrow.

PROMISING YOUNG WOMAN
In this darkly comedic thriller from writer/director Emerald Fennell, Carey Mulligan plays Cassie Thomas, a young woman traumatized by an assault in college. Ten years later, she’s out for revenge against all sorts of similar male predators. How does she do it? She sets herself up as bait at a local bar or club and waits for a guy to take her to his place to take advantage of her. But once there, she turns the tables on them. Like in the first instance where she fakes passing out and the guy responds by attempting to go down on her without her consent. Cassie suddenly sits up, utterly sober, and asks him in a deadly serious tone, “What are you doing?” It shocks him. Us too. It’s a wonderful cue to just how unexpected and cold this #MeToo tale will be. 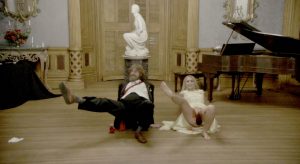 BORAT SUBSEQUENT MOVIEFILM
Sacha Baron Cohen made a timely return as Borat, ready to take down the MAGA world. Only this time, his titular character has a sidekick. Borat’s sheltered daughter Tutar (played by Maria Bakalova in a knockout performance) is along for the ride, and director Jason Woliner films them doing things you won’t believe. To take the piss out of the creepy dad and daughter duos at a Southern debutante ball, Borat and Tutar dance the polka celebrating Tutar’s period. Their flicks and kicks are grotesque without question, but also undoubtedly hilarious. 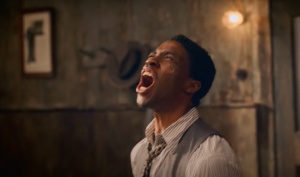 MA RAINEY’S BLACK BOTTOM
The late, great playwright August Wilson’s words are as musical as the R & B on display in this distinctive adaptation of his second play from “The Century Cycle.” Chadwick Boseman plays Levee, an ambitious musician fighting bigotry in the show biz of the 1920s, with a chip on his shoulder a mile wide. Wilson’s most famous monologue in the piece, kept intact by screenwriter Ruben Santiago-Hudson, comes when Levee breaks and looks to the heavens and viciously excoriates God for hating black people. Director George C. Wolfe lets Bosman rip in a profanely chilling and unforgettable scene, one likely to win Boseman a posthumous Oscar this April.

THE FATHER
It has yet to open, but Florian Zeller’s adaptation of his own award-winning play about an older man battling dementia is one of the year’s very best achievements. Zeller is faithful to his original text but plays up the cinematic visually. In the first minutes of the film, Anthony (Anthony Hopkins) is the picture of confidence: well-dressed, listening to classical music, and enjoying life in a fashionable London flat. His daughter (Olivia Colman) arrives, and they banter about her moving to France, among other things. After she leaves, Anthony turns a corner and sees a man sitting in his den. He has no idea who he is, and the fear on Anthony’s face is palpable. It’s at this moment we start to realize that he’s not in control of his faculties. From that point on, neither he nor we can trust anything he sees or imagines he sees. 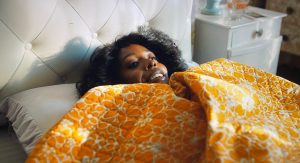 LOVERS ROCK (SMALL AXE)
Filmmaker Steve McQueen delivers five exceptional entries in his British film anthology SMALL AXE. Each is about black life in the UK over the past few decades, and none has been getting more praise than the film entitled LOVERS ROCK. In the 1980s and stars Micheal Ward and Amarah-Jae St. Aubyn as two lovers rendezvousing at a reggae house party. They interact with various friends in an atmosphere dizzy with joy, laughs, hope, and libation. (A little danger too, but you’ll have to see it to find out what it is.) The film’s very last shot is of St. Aubyn after her character Martha has snuck into her bed in the wee small hours of Sunday morning. Scrambling to hide under the covers, she hears her mom call her for church and smiles at the night she’s had. We do, too, as it’s been a wonderfully fizzy film. 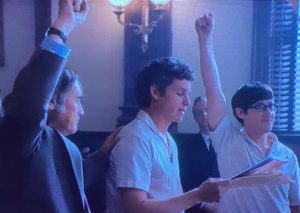 THE TRIAL OF THE CHICAGO 7
Aaron Sorkin wrote and directed this historical legal drama about the Chicago Seven trial. A group of anti-war Vietnam War protestors was charged with conspiracy and crossing state lines to incite riots at the 1968 Democratic National Convention. It was largely a sham trial. Sorkin’s film mixes heavy drama with acerbic comedy, ably performed by Sacha Baron Cohen, Eddie Redmayne, Joseph Gordon-Levitt, Mark Rylance, and Frank Langella. The prosecution ended up winning, but the verdicts were overturned shortly thereafter. The end scene suggests why, as the convicted Tom Hayden (Redmayne) reads off the names of the American soldiers killed in the war as part of the last words from the defense. Endings don’t get much more poignant or stirring than that. 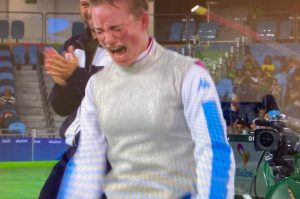 RISING PHOENIX
Most of us are familiar with the Paralympics, but this wondrous documentary illuminates the cause, the talent, and the games. It also showcases various athletes in profiles that are moving, cheeky, and often gorgeously photographed. (There’s a high fashion gleam to it, a lovely glamorizing of these incredible talents.) One of the stand-out personalities in Ian Bonhôte and Peter Ettedgui’s doc is Beatrice Via, an Italian fencer who lost her arms below the elbow and her legs at age 11 due to severe meningitis. However, that doesn’t slow down her talent or spunk, and when she’s shown winning the gold at the 2016 Rio Paralympic Games, her hyper reaction is an unforgettable image. It’s easily one of this year’s very best.

from The Establishing Shot https://ift.tt/2KGwwIK
via IFTTT