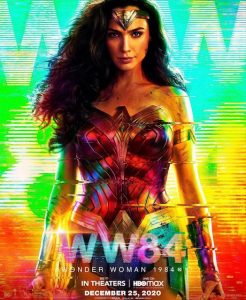 Gal Gadot brings so much to the party as Wonder Woman that it’s a shame that only one of the four movies she’s played the character in has been truly exceptional. This sequel to 2017’s wondrous WONDER WOMAN tries hard, huffing and puffing from the first second to last, but WONDER WOMAN 1984 really doesn’t go anywhere. This new film gives us two villains, and the more don’t make things merrier, not to mention Chris Pine in an oddly-conceived return as Steve Trevor, but at least it has Gadot. She’s even better this go-round in the action scenes, and when called upon to stretch dramatically, she does her best screen work to date. She makes the most of her part, but it’s not quite enough to make the picture work.

Taking place 66 years after WWI, when Steve died saving the day while Diana, AKA Wonder Woman, saved the world, the wondrous Amazon hasn’t moved on all that well from those events. For starters, she still pines for Steve, walking around rather glumly in her work as a curator at the Smithsonian in Washington, D.C. It’s the first of many miscues made in this outing, suppressing Gadot’s natural spark and charm for most of the first act until Pine appears. (It also glosses over those 66 years. What, no other lovers or friends? What’s so super about that?)

Gadot gets to strut her stuff when Diana shows up in her Wonder Woman garb to stop a jewel heist at an 80s mall that seems more cartoonish than the one in the third season of STRANGER THINGS, but it’s a fun set-piece nonetheless. Director Patty Jenkins shoots the action with real verve and clear through-lines, making it one of the best scenes in the sequel. Gadot looks magnificent swinging around the mall from her golden lasso like a female Tarzan, and she adds lots of cheeky wit to her interactions with both the thieves and the innocent bystanders.

However, soon after, the main plot kicks in, and its complexity starts to weigh down the fun. There’s an ancient artifact recovered from the robbery that comes with far too much back story. Still, Gadot makes the most of such scenes discussing the relic’s origins in some wittily bantered scenes with fellow Smithsonian expert Barbara Minerva (Kristen Wiig). In addition to striking up a friendship, the two become sisters fighting the hierarchy of male sexism evident both in and out of their DC workplace.

If the film had stuck with these two in that feminist storyline, striking a blow against the macho jerks ruling the world, this sequel might’ve been both timely in a #MeToo way, as well as something smaller but more significant. Instead, the film’s narrative quickly dissolves into a typical “mad man wants to take over the world” tripe, one we’ve seen so many times, it all but induces yawns.

The artifact, you see, is something akin to a magic lamp. Hold it and make a wish, and voila – it comes true. Thus, when Barbara wishes that she was as sexy, cool, and confident as Diana, she soon starts strutting and pouting like she’s Sheena Easton from one of those Bally health club commercials in the 80s. Diana, meanwhile, ends up unwittingly wishing for the return of her dead lover Steve. Soon enough, his spirit shows up, now taking control of the body of a local hunk.

It’s a strange interpretation of Steve, but Pine makes him a strong comic foil to Gadot once again. Whether it’s sheepishly wearing 80s fashions or marveling at Diana’s ever-resplendent abilities, Pine brings the funny. Yet even with all the good that Gadot, Pine, and Wiig add, the ever-lurching plot starts mucking up all the fun.

The plot requires the big baddie to take over the screen, and he’s a TV huckster trying to become a rich oilman. The villain, named Max Lord, is clearly modeled after Donald Trump, right down to his noisy suits and excessive hair. Of course, the plot has Lord get his hands on the relic, wishing for not only fame and fortune but the desire to rule the world. (No cue of Tears for Fears here. A surprising missed opportunity.)

As played by Pedro Pascal, Lord is funny in spots, but there’s too much of the villain, and he’s not particularly scary or scarily charming in a Christoph Waltz sort of way. He’s just exhausting. Maybe it’s my Trump fatigue talking, but I really wanted him to get killed off early, but no dice. Instead, Diana and Steve spend the better part of the movie trying to chase him down amongst the Middle East, where Lord is trying to steal all the oil fields.

Here though, Jenkins does manage to deliver the most amazing action scene of the film. While Lord and his convoy of armed vehicles drive away after a theft, Diana bobs and weaves amongst the vehicles while on foot, trying to stop him.  It’s beautifully choreographed and looks exceedingly real, but it doesn’t add up to much as Lord gets away. At the end of it all, Diana saved a couple of kids from being run down in the streets, yet she crashed the half dozen collection of vehicles.

One of the great things about the 2017 film was how Jenkins and her screenwriters made each set-piece more than just an excuse for fighting. Such scenes in that film came with real consequences. Diana broke through “No Man’s Land” in the first scene where she revealed her Wonder Woman get-up to the world because she was no man (tee hee), but rather, a woman who did it to save the starving villagers on the other side. In this sequel, the big battles seem more like studio demands than narrative necessities.

That’s especially true in the late third act skirmish between Diana and Barbara. Once her friend, the scientist has now morphed into a cheetah/human hybrid wanting to take out her frustrations on Wonder Woman. It plays as odder than empowering, and the unfortunate makeup applied to Wiig too readily recalls those stuck in the film version of CATS last Christmas. It’s not a good look.

The script, written by Jenkins, Geoff Johns, and Dave Callaham, makes a host of similarly misjudged decisions that bog down the proceedings. Diana has to keep explaining what’s going on to the naive Steve. A mediocrely done Reagan appears in numerous White House scenes. And the film even throws in some overly maudlin pathos concerning Lord’s adopted son.

Gadot still manages to shine through, however, even amidst all such mistakes and bombast. She aces an earnestly-delivered monologue straight to camera late in the game, one that might just put a lump in your throat. She also shows genuine anguish in the final scenes too, both physically and mentally, which is startlingly strong acting.

Hopefully, the next outing of Gadot and Jenkins will aim smaller. Less is more when it comes to this compelling icon. After all, invisible planes are no match for strong character development. Gadot’s confidence and cleverness in the role are what’s powerful here. She’s a marvel. If only this sequel were.

from The Establishing Shot https://ift.tt/3nLmxQH
via IFTTT