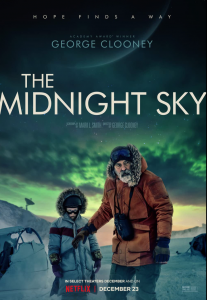 Much of what shows up onscreen in George Clooney’s new film, THE MIDNIGHT SKY opening on Netflix today, feels very familiar. Like most Hollywood epics about space exploration, the themes are sacrifice and loneliness. GRAVITY, THE MARTIAN, INTERSTELLAR, and AD ASTRA were all released in the last 10 years, and all mined those motifs. Even Clooney’s remake of SOLARIS in 2002 was strikingly similar. Yet, in contrast, THE MIDNIGHT SUN feels less like a thriller about space survival and more of a tone poem. At times, it even plays like a dream, its story seeming to unfold in the recesses of the protagonist’s mind rather than the real world.

Clooney plays that protagonist, a scruffy and bearded septuagenarian astronomer named Augustus Lofthouse who’s nearing the end of his life in 2049. He’s battling cancer and staying behind to mind the Barbeau Conservatory in the Arctic Circle after the evacuation of all of its inhabitants. Some disaster has struck the planet, and everyone wants to rush home to whatever remains there. With no family and a weakening body in need of daily meds and blood transfusions, Augie chooses to die alone at Barbeau, ambling around the station, quietly taking care of himself and the place until his final breath.

Not long after everyone else has gone, he discovers a little girl (newcomer Caroilnn Springall) left behind. She’s mute, stand-offish, and prone to playing with her peas and drawing irises with purple crayons. The two form a begrudging bond and she even gets him to soften some, but Clooney wisely doesn’t push the schmaltz as an actor or director. Iris, as he now calls her, could have melted the old man’s heart completely but Clooney keeps Augie a tough bird. Their relationship also remains secondary to Augie’s primary focus when he intercepts a transmission from a spaceship on its way home to Earth.

On a ship called the Aether, five astronauts are returning to the States after their exploration of Jupiter. They’re stymied by their inability to get ahold of anyone at NASA, not aware of the disaster that has left the planet in ruin. The Barbeau manages to contact the Aether, but before Augie can warn them fully, the communications are disrupted. Feeling obligated to save their lives, he races to a nearby satellite via his snowmobile, complete with Iris in tow.

The narrative follows both Augie’s efforts to get through a tough snowstorm as well as the increasing worry of the crew on the Aether. Even so, Sully (Felicity Jones) remains upbeat after her discovery that she’s pregnant with the child of Commander Tom (David Oyelowo). Meanwhile, stalwart Mitchell (Kyle Chandler) pines for his wife and daughter back home, unaware that they may not even be alive anymore, while the seasoned Sanchez (Demian Bichir) and younger May (Tiffany Boone) ensure the ship is functioning as well as it can under the strange circumstances.

Wisely, the plot recognizes that there is already plenty of tension in the story and can thereby avoid cliches of crew in-fighting that plague most such space stories. No one’s a bad egg here, and the entire crew is kind and competent. Clooney smartly directs them all to underplay their roles too. And even when they bond over a sing-along Neil Diamond ditty, the humor doesn’t turn burlesque.

Yes, the Aether is such a gorgeously designed spacecraft, full of intricate details and billion-dollar acoutrement, that you know the story is going  to partially destroyed it, but even here, Clooney shows restraint. He lets a dangerous space storm sneak up on us with little fanfare from Alexandre Desplat’s sly score. It’s a calamitous event, for sure, but it speaks for itself without overly done musical cues.

As the two stories move closer together, Clooney does his best to avoid painting such dovetailing with broad strokes. His connection to them is easy to predict but it’s none ridiculously obvious. He also ensures that the crew remains level-headed scientists even as their situation worsens. Even little 7-year-old Iris never wears out her welcome, turning into a maudlin symbol. This could’ve so easily turned into straining space opera, but Clooney never lets it get even close.

In fact, for all of the blatant symbolism of author Lily Brooks-Dalton’s source material – August Lofthouse is indeed an august scientist working in a place aimed at the sky – Clooney seems determined not to underline any of it. He even shies away from telling us exactly what happened back on Earth, nor what the literal or figurative fall-out is there.

There’s a reason so many space epics are about the dangers of isolation in space…it plays. Clooney realizes that, so he has ensured that screenwriter Mark L. Smith crafted a subtler adaptation than most would have penned. The director has also ensured that Martin Rue’s cinematography, while visually splendid, never fetishizes its expensive sets or effects. Good performances are given by all, including Clooney tampering down his natural charisma and elegance. Even a potentially gruesome death scene instead becomes a poignant ballet of plasma flitting about in zero gravity.

Someday someone will make a story that takes place in space where not every decision comes weighted with portent, and astronauts will manage the loneliness without falling apart. THE MIDNIGHT SKY isn’t that film, but what Clooney has delivered is unique enough: beautifully visualized, delicately haunting, at times real, at other instances dreamy. He’s taken tried-and-true tropes and turned them into something far more elegant. In fact, he’s made a film that, at times, feels positively poetic. It often soars, albeit quietly.

from The Establishing Shot https://ift.tt/3qG37Pj
via IFTTT