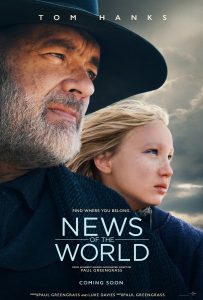 Morality has always been one of the watchwords of the western and the characters that Tom Hanks has played in his career, so it’s surprising that it’s taken him this long to star in the genre. (No, playing Sheriff Woody in the TOY STORY franchise doesn’t count.) In many ways, the western and the superstar are perfectly suited to each other, and in the soon-to-be-released NEWS OF THE WORLD,  filmmaker Paul Greengrass serves up the righteousness of both in a film that’s a handsome adventure and earnest character study.

Hanks plays Captain Jefferson Kyle Kidd, a veteran of the Civil War who finds himself at a crossroads five years after the South surrendered. He’s roaming the state of Texas, making a living by reading newspapers to the sheltered townsfolk he comes across. Kidd’s bringing the world of movers and shakers to those with little education or access to culture, and when he reads to them, he’s not just an orator, but a teacher and moralist as well.

The stories he chooses to share tend to be on the instructional side, urging the South to accept their loss of the war and move on. (The parallels to our current post-election climate could not be more fitting.) The locals don’t always like the lessons he’s handing out, preferring instead to exist in their bubbles where they can curse the darkness and long for yesteryear. Kidd won’t let them as he gently forces them to accept the hard truths he’s extolling. They may want to believe in fake news like the South shall rise again, but he won’t let them. (Again, the parallels to our modern world couldn’t be more apparent.)

Kidd’s profession nets him merely a meager living, and he questions if that’s all there is now to his life. Soon enough, he will find a higher purpose when he happens across an orphaned girl in the wilderness, and suddenly, he’s forced to become her reluctant caretaker. The girl is named Johanna (Helena Zengel), and for an 11-year-old, she’s quite a handful. Raised in the ways of the Kiowa tribe after they killed her German parents in a skirmish, she’s hostile towards westerners, crude in her manner, and speaks only a smattering of English.

Here is where screenwriter Greengrass and fellow scribe Luke Davis’s script, adapted from the 2016 novel by Paulette Jiles, turns into a road picture. Kidd and Johanna start a 400-mile trek in a two-horse wagon to reconnect her to those German parents. They start, afraid of the road that lies ahead and leery of each other. Soon enough, they’ll get to know each other, especially as they must work together to overcome various obstacles placed in their path.

And during all the episodic adventures, the duo makes for an interesting odd couple. Johanna hems and haws while Kidd calmly parents her. She eats soup with her hands while he patiently instructs her on the use of a spoon. Throughout it all, Hanks makes Kidd wry and endearing, almost a grizzled salt version of his Fred Rogers characterization from IT’S A BEAUTIFUL DAY IN THE NEIGHBORHOOD.

Johanna teaches him a thing or two as well, like how to improvise gun powder when you’ve run out of buckshot during a gunfight. That lesson comes during the film’s best scene, a crackerjack shoot-out in the mountains where Kidd must fend off ex-confederate hooligans who want to steal the virgin girl and have their way with her. It’s a tough film, never flinching from showing such immoral motives contrasting with those of the earnest Kidd.

Greengrass shoots all of this with a similar earnestness. It’s straightforward storytelling, done with grace and clarity, never underlining anything too broadly. And he lets the quiet moments play as vividly as those with action or dialogue as when the two lead characters merely observe each other.

It’s a compelling story about two vulnerable misfits looking for a future in the new nation after the war. In unmissable terms, the film also suggests that what made America great then is the same that makes it great now: progressiveness, moving forward, and being open to new ideas and new opportunities. Such paths may be unchartered, but that’s what makes the journey so exciting.

from The Establishing Shot https://ift.tt/379ShJG
via IFTTT