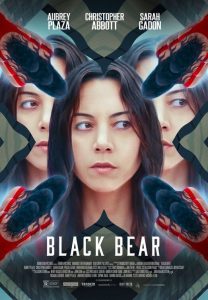 Some films have so many twists that it almost becomes impossible to review them. BLACK BEAR is one such treat, a clever and intense new movie about a love triangle that turns out to be so much more than just that. However, giving away too much of it will spoil things, so it’s best to only set up the basics and extoll why it works so well. The wealth of surprises are yours to discover upon viewing this serpentine chamber piece.

The story starts with a filmmaker named Allison (Aubrey Plaza) sitting on a pier in a red one-piece sitting pensively and staring into the camera. The young woman is difficult to read; is she worried, perturbed, feeling a chill from the lake, and ready to go inside? Part of this film’s charm is that we don’t know exactly what she’s thinking, and the more the film goes on, the more her moods and motives will become all the more mysterious.

Then the story seems to flashback to her first arriving at a cottage on that lake, an expensive cabin where she hopes to spend some quiet time writing her next script. Yet right off the bat, that’s going to be difficult as the cottage owner is not only chatty but confrontational as well. Gabe (Christopher Abbott), bearded and passive/aggressive, acts like it’s not a big deal that a celebrity is in his midst, yet he’s Googled her extensively and watched all her films. Allison is flattered, though she teases him that she doesn’t like his compliments.

Allison meets his pregnant wife Blair (Sarah Gadon), a knockout with a chip on her shoulder. She lights into Gabe immediately, and they spar with a similar hostility as George and Martha did in WHO’S AFRAID OF VIRGINIA WOOLF. Allison is both amused at how Blair emasculates her husband and acts so jealous of his straying eyes. But Blair is all business, and the threat of violence hangs in the air. It’s not long before all three are shouting at each other as tensions rise to a  boiling point usually reserved for the third act of such dramas. And yet, BLACK BEAR is just 20 minutes in. What’s going on here?

From there, the story, written and directed by Lawrence Michael Levine, twists itself into all sorts of knots, placing the metaphorical rope around each of the trio’s necks throughout the next 90 minutes. The numerous rug pulls are real head slappers, too, not what you’ll expect at all. It’s cheeky, disturbing, and above all, mesmerizing.

All three actors have a field day, being called upon to be both likable and awful. It may be the best work the trio has ever done onscreen. Abbott, usually a subdued presence, runs the emotional gamut this time out. He’s hissable and hilarious and even earns laughs while delicately nibbling on celery in the final 30 minutes. Gadon should be Jennifer Lawrence by now. She’s more talented, beautiful, and hopefully, this tour de force will finally catapult her into A-level status. I’ve loved her since ENEMY and INDIGNATION, and you should fall for her here.

As for Plaza, coming off of her scene-stealing turn in HAPPIEST SEASON on Hulu, she’s having a helluva December. Here, Plaza gets not only to play fierce and funny, but she’s mature and sweet too. The pendulum swings in her performance are astonishing and should merit awards consideration. So should Levine’s crafty script, who, along with his deft direction, manages to be both serious and sly while riffing on marriage, female bonding, indie filmmaking, and even the oddities of recording room tone at the end of production. (You’ll understand what I’m referring to after you’ve seen it.)

By the end of BLACK BEAR, Levine provides the solutions to all the puzzles he’s laid out for us. However, what remains unresolved is just how brutal, and brutally funny people can be to each other. It’s a nasty world out there, and it makes for an incredibly affecting dramedy.

from The Establishing Shot https://ift.tt/33P7uhb
via IFTTT