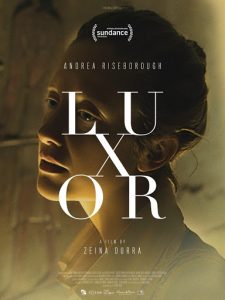 In the new film LUXOR, there are two compelling sights to see, both, arguably, on the side of the exotic. One is Egypt’s famed city; the other is the face of lead actress Andrea Riseborough. All of the ancient beauty of that venerable upper African city is easy to see and describe. Luxor is warm and sensual, filled with history, yet mysterious too. With its catacombs and ruins constantly yielding discoveries, can the nation ever be truly known in its entirety? Of course not, nor can Hana, the character Riseborough plays. She can be warm and sensual, but mysteries abound in her too. Hana carries angst like the over-sized purse she touts everywhere, yet she keeps it out of reach to the public, buried as deep as an Egyptian treasure. And in Riseborough, writer/director Zeina Durra has found the perfect actress to convey such a protagonist’s bedeviled inner world.

It starts with Riseborough’s large, expressive eyes, her most striking feature. Often used for their chilling intensity in thrillers and genre films, they speak volumes here about her character’s sadness, uncertainty, and trepidation. Hana walks through the city, her old haunts, well, haunting her, not knowing whether to embrace the nostalgia or cry over the lost opportunities strewn in her past. That malaise informs every other part of Riseborough’s body and performance too. Her demure stride, her tentative fingers, her hesitation before speaking – it’s all part of a lead character unsure of where she fits in the world.

Hana’s world has certainly been a dramatic existence as of recent. She’s a British aid worker, returning to the city of Luxor, having just served a trying tour as a trauma surgeon during the war on the Jordan and Syria border. Hana is exhausted and wan, her frumpy clothes hanging off of her like she’s a brittle coat rack. She desperately needs some R & R but has chosen a city that hardly yields such contentment.

Not long after arriving, Hana is reunited with her former lover Sultan (Karim Saleh, charmingly low-key). They had an intense love affair long ago and have lost track of each other in the subsequent years. Now, he’s busy digging up a tomb in New Haven, and it couldn’t be a more fitting metaphor. Much of Hana’s and Sultan’s past will be uncovered as well while they spend days and nights together. And despite some joyous times in hotel pools and her posh, first-class hotel, Hana can never totally relax. Her eyes barely blink, her body seems to both clench and droop, and words don’t come easy to her.

Hana would like to move forward, but everything around her rehashes the past. At one point, while visiting a dig, one of Sultan’s archeological colleagues informs her that she’s “walking in places that have thousands of years of intense human emotions.” Indeed, for Hana, her personal history and that of Egypt converge as completely as an overlapping Venn diagram.

Filmmaker Durra doesn’t rush her subtle character study. At times, it seems languid to the point of inertia, but that’s reflecting Hana’s predicament. And Durra adds sly humor to the proceedings throughout, adding bits of relief to all the angst. When Hana mentions that she feels old, walking through the city she knew so well in her 20s, Durra has Sultan remind his old flame that she’s not exactly 90. But then, seconds later, a comely woman pedals by on her bicycle, and he introduces Hana to her as his “old friend.” The look in Riseborough’s eyes is almost as dismissive as the words Durra has written for her as a retort.

The film is often dry like that, its sense of humor matching the arid climate of the locations. Durra keeps things subtle, never overplaying a laugh, a line, or a metaphor. And in Riseborough, she has a delicate actress who says so much without saying a word. The actress’s resume is filled with characters who are almost mute. The characters she played in MANDY, BATTLE OF THE SEXES, and this year’s POSSESSOR spring instantly to mind. Yet, even here, when her character is writhing on the dance floor in bewilderment or sobbing in the hotel hallway in agony, Riseborough doesn’t let it all hang out. She holds back some, ensuring her performances maintain an air of mystery. It makes her characters, and the stories they’re in, all the more fascinating.

LUXOR is a deliberately methodical character study, taking its time as it carefully peels away Hana’s layers. The film is almost a chamber piece, albeit one placed in a setting with utterly spectacular production values. One exterior is better than the next, yet ultimately, it’s the interior of a complex woman that is the most compelling sight to see.

from The Establishing Shot https://ift.tt/37tWre8
via IFTTT