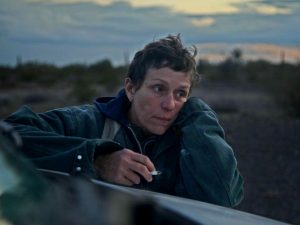 The time period of the Great Recession of 2007-2009 is the backdrop for filmmaker Chloe Zhao’s latest film entitled NOMADLAND, but it’s hard to imagine one that would feel more in tune with the troubled times of today. Its themes of economic disparity, displacement, anxiety, ageism, and America’s crumbling safety net could take place just as easily in 2020. In fact, the most startling realization upon watching this film is how our nation has been on such a course for over a decade now. Watching this film is like looking in a mirror and not liking a mole that’s been growing on our faces for years. NOMADLAND is a harshly critical assessment of our nation’s sickness and deterioration. Yet, Zhao remains a filmmaker who still believes in individuals’ indomitable spirit to not lose themselves entirely in such malaise.

Based upon the novel Nomadland: Surviving America in the 21st Century by journalist Jessica Bruder, Zhao has created a modern road picture. Her protagonist is Fern, played by Frances McDormand, a 62-year-old-woman who’s lost her job and has been forced to change her life radically. She loses her home, her savings, and takes what little she has left, and hits the road, trying to create some life for herself as a wandering nomad.

Driving through the Midwest in an old van converted into her transportation/ kitchen/bedroom, Fern travels light. She has few worldly possessions and almost nothing of sentimental value outside of some plates her father gifted to her high school graduation. Existing is her daily challenge. Where will she sleep? What will she eat? Are the people she will encounter the friend or foe variety?

Mostly, Fern is concerned with finding work to make some money to keep it all going. Throughout the course of the story, she will take odd jobs here and there, anything to make ends meet. It’s a tough lot, and the stress of it all shows on Fern’s face in every frame of the film. Even when she’s smiling, there is a tinge of uncertainty in her eyes, as if she cannot wholly trust or relax. At times, the film creates as palpable a sense of dread as any horror movie.

And if it’s not unsettling, it’s often depressing. Make no mistake; Fern has been discarded by society. She’s over sixty, not particularly skilled, without a job, without money, and has no real ties to family or friends. Employers chuckle at her situation, insensitive to her lot. Even acquaintances salt her fresh wounds. She runs into a family she used to tutor in a big box store, and they ask if she’s now homeless. Fern tries to brush it off, saying she’s merely houseless, but the sting is evident in her eyes.

But right when you think that the film will get darker and darker, Zhao keeps building up Fern’s strength, even if it’s only by increments. The more she’s on the road, the more Fern feels a certain sense of freedom. She’s now untethered to anything, and that gives her more possibilities than she first imagined.

Thus, Fern starts to experience all kinds of new people and situations, even resisting opportunities to stay in one place and stay employed. Her life becomes episodic, living in the moment, and the film matches her new life in its tone and narrative. The film feels loose, spontaneous, wholly natural, as if it’s all just happening, spooling out unplanned.

Zhao’s film reminded me of what Paul Mazursky created with HARRY & TONTO back in 1974, and Krzysztof Kieslowski’s put into his film THREE COLORS: BLUE in 1993. Both were versions of “road pictures” concerning a lonesome protagonist who learns that the best plans are often no plans at all. And in all three of these films, the hero’s journey is as shambling as ours in the watching. Life washes over the leads in this trio, just as the experience of watching it all washes over us.

Zhao’s story may derive from Bruder’s book, but she gives the material her own warm, humanistic spin. She cast actual road warriors in supporting parts, folks living life just as Fern does instead of actors, giving the film its utter authenticity. Zhao shot everything on location, too, in all kinds of light and weather, furthering its sense of immediacy. Her script never feels overwritten either. Instead, odd moments stand out more than any plot points or set pieces. In all the little pieces of randomness, Zhao finds most of the life in the story. At one point, Fern does a funny little dance amongst the rocks in the desert for no other reason than that she’s feeling tranquility, and it’s a quiet little moment of joy that is wholly infectious.

Zhao keeps it all so scruffy and unadorned, at times feeling like a shaggy documentary. If it wasn’t for the presence of McDormand and veteran character actor David Strathairn, you might think it was one. It feels that honest.

McDormand is onscreen for virtually the entire time, often alone, and it may be her finest performance yet. She doesn’t often play particularly vulnerable characters, but Fern is not 100 % sure of herself in any scene. She carries a tinge of fear and uncertainty on her face, around the corners of her mouth, at all times, and it draws us into her world even when it seems unfathomable.

Indeed, if the film has any drawbacks, it is that the story is hard to stomach. This year has turned us all into victims, at the mercy of a pandemic, a shattered economy, and a dithering government unable to help in the ways it should. If you’d rather counter such angst with escapism, NOMADLAND isn’t for you. However, if watching someone pull herself out of the fire and find a certain form of peace within a compromised existence strikes you as a relatable goal for 2021, then this film might be just the antidote you need as we crest into the near year.

from The Establishing Shot https://ift.tt/3lj8kZb
via IFTTT