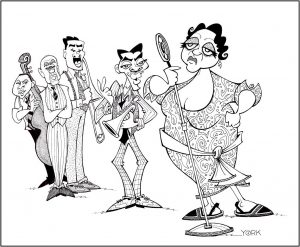 The late, great playwright August Wilson wrote ten plays about the black experience in America known as The Century Cycle and it’s wonderful to see screen adaptations of his work now being produced. FENCES, one of his two Pulitzer Prizes for Drama, was brought to the screen marvelously in 2016, and now, the stellar MA RAINEY’S BLACK BOTTOM arrives in theaters on November 25 and on Netflix on December 18. Director George C. Wolfe, screenwriter Ruben Santiago-Hudson, the cast, and crew have not only captured all of Wilson’s brilliance, but they’ve managed to bring his dual themes of racism and show business to the fore equally, chronicling the toll both took on the play’s characters in 1927. Like all period pieces, the story speaks to today’s times just as much as those of yesteryear and gives it even more gravitas.

A rundown recording studio in Chicago is where legendary blues singer Ma Rainey (Viola Davis) and her musicians are set to record a new album of her greatest hits. The band members arrive first and are sequestered in a dingy, dark waiting room in the basement. It’s the first of many examples of how they will be treated shabbily for not only being black but for not being as important a musician as star Rainey is. For Rainey’s white producers (Jeremy Shamos, Jonny Coyne), the band isn’t much tonier than the black porters, butlers, and servers they encounter in the city. The musicians know it too, and their station will soon turn into a clash of egos and the limits of privilege.

Three of the band members – pianist Toledo (Glynn Turman), trombonist Cutler (Colman Domingo), and string bassist Slow Drag (Michael Potts) know where they stand and are grateful to be a notch or two above those porters, butlers, and servers. Trumpeter Levee (Chadwick Boseman) isn’t appreciative at all. He’s ambitious, lean and hungry, cocksure of his talent and envious of Ma’s fame and fortune. Soon enough, the four men begin clashing about their roles as Cutler tries to keep the peace between old guard Toledo and new upstart Levee. But as his name would suggest, the latter is destined to burst open at any moment and endanger their important gig.

Ma only adds to the tension when she finally arrives. The aging diva is unapologetically late and demanding, ruffling everyone’s feathers with her demands for Cokes, her flagrant lesbian relationship with the comely Dussie Mae (Taylour Paige), and her insistence upon a speaking part during one song recording for her stuttering relative Sylvester (Dusan Brown). Wilson not only sets the stage for doom but laces it with acid humor to boot. (It can’t be a coincidence that Sylvester shares a name with that famed, sputtering cartoon cat.)

Wilson’s dual themes collide even more and more as the recording session goes on. Ma uses her star status to act abhorrently, persecuting her toady producers and her entourage. (She’s learned well from her white overseers.) She’s just big enough to get away with it until after the recordings are in the can. Meanwhile, the band members quietly accept her digs, knowing that they’re lucky to be part of her group even if it comes ladled with insults. Levee bristles at her ego, brashly challenging her artistry. He prefers his new orchestrations for her old standards and isn’t afraid to get into a pissing contest with her.

Ma is only so tolerant of Levee’s hubris, perhaps recognizing herself in the overly confident player. Levee, on the other hand, is too blinded by his own pride and naivete to cannot fully recognize the toll celebrity has taken on Ma. She’s become a bloated, surly, and unmanageable shadow of her former self. Similar to Marlon Brando and Orson Welles, Ma seems to have turned into a hulking, gorged cautionary tale about the limits of fame.

Wolfe is primarily a theater director but he’s expanded the story cinematically in some places, cleverly adding musical scenes down South, as well as opening up the narrative for a few bits outside the studio. But by and large, he keeps the drama focused on the faces of his players trapped in that small studio, battling each other through their will and words. The true musicality lies in Wilson’s dialogue and how each of the characters plays their part, maximizing the rhythms of speech, and Wolfe and Santiago-Hudson make the most of it.

Santiago-Hudson’s script gives all the players a lot to work with, keeping virtually all of Wilson’s words intact. The screenwriter does condense some scenes while eliminating others, but the veteran actor gives the cast plenty to capitalize on. The film’s running time is only 94 minutes and could’ve stood to be longer, but at least there is no fat in the story. Santiago-Hudson keeps things lean and mean. Thankfully, he doesn’t underline Wilson’s symbolism either, especially when it comes to Levee’s new yellow wingtips. They, like Cinderella’s glass slippers, and Dorothy’s ruby red pumps, exemplify the hopes and illusions of a dreamer, yet those shoes never wear out their welcome with too much emphasis.

Of course, MA RAINEY’S BLACK BOTTOM is, first and foremost, an actors’ showcase and the ensemble here is SAG award-worthy. Domingo, so forceful and intimidating in other roles, beautifully essays quiet leadership here. He’s a man who’s survived by acting with calm and caution. Turman brings a rollicking bluster to his sage role, using his gruff voice to both inspire and hector, in both whispers and shouts. Potts’ reaction shots to everyone are wonderful to discover in the corners of the frame, and Shamos plays Ma’s manager/producer as both a genial doofus and a venal snake. (Probably not far off the mark, even by today’s standards.)

Davis is a revelation playing the title character. Her Ma is angry, ugly, and forever on edge. Sporting garish makeup, painted-on eyebrows, and a padded bodysuit to showcase a diva gone to seed, it’s a startling physical transformation. Even with all that window-dressing, Davis comes through, essaying a woman full of wisdom and foolishness in equal parts.

As for Boseman, his final screen performance is his best yet and very well could be the acting triumph of the year. He looks far more youthful than many previous Levees, including Charles S. Dutton’s two turns in the role on Broadway, but it works to his advantage here. Levee’s preening, insecurity, and libido are more understandable cloaked in immature youth. And when Boseman tears into the two righteous monologues Wilson wrote for Levee, left intact here, the effect is shattering. Do black lives matter to God, let alone anyone in America? Indeed, that is a pointed question for Levee’s time, as well as ours today.

What isn’t in question is the magnificence of such material, as strong as ever since it debuted on stage in 1982. Wolfe, et al., have done a spectacular job in bringing Wilson’s prose to the screen, turning this adaptation into one of the year’s very best film achievements.

from The Establishing Shot https://ift.tt/2IZOAfI
via IFTTT