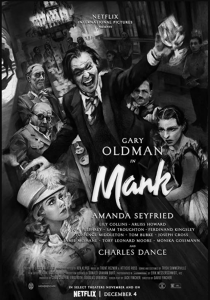 There are many components of the new film MANK to admire, from its cinematography and editing techniques emulating 40’s style filmmaking to Gary Oldman’s wry, lead performance as screenwriter Herman “Mank” Mankiewicz to the tense score by Trent Reznor and Atticus Ross. Director David Fincher has made a detailed and vivid character study of a writer penning the script of CITIZEN KANE for Orson Welles in 1940, although his film is flawed by one critical omission – – its failure to give the viewer any genuine sense of what Mank wrote. Written by director Fincher’s late father Jack Fincher, his script doesn’t properly illuminate Mankiewicz’s script, and it’s an unfortunate oversight.

The late Fincher’s script certainly paints a vivid portrait of Mankiewicz and his times. We get a comprehensive sense of Mank’s wit as he drops little bon mots into every conversation. Mank’s struggles with alcoholism are not shied away from either as he ‘self-medicates’ to ease his distaste for Tinsel Town. And even though, more often than not, Mank comes off like a bloated, trudging misanthrope, commenting on life rather than fully participating in it, the film makes him a likable and often heroic lead, one we root for from start to finish.

But where is his writing? Save for one early scene where he dictates half a page to Rita Alexander (Lily Collins) his assigned “Girl Friday,” MANK doesn’t showcase any of his writing of the CITIZEN KANE script. We’re left wondering how this genius screenwriter built the drama on the page, how he plotted out the character arc of Kane, what he excised, and what he kept. There are no scenes showing how Mank visualized any scene he’s writing in his head. This is a film about a writer without ever embracing his writing.

Everyone in the film raves about what’s he is scribing but we have to take their word for it. There’s even a featured scene at the Academy Awards where Mankiewicz and Welles (Tom Burke) win for Best Screenplay, but we’re not even graced with a clip from CITIZEN KANE there. If you’ve never seen the masterpiece, you’d have no idea what all the fuss is about. And even if you have seen it, you’re left scratching your head as why the filmmakers here chose not to illuminate just how Mankiewicz worked to arrive at his masterpiece.

Granted, it’s not easy to visualize a writer’s process. Externalizing that which is primarily internal is tricky, but it has been done superbly in numerous films before. SUNSET BOULEVARD (1950), BARTON FINK (1991), and ADAPTATION (2002) are just three. In those films, we saw what the writer envisioned, talking about his craft, visualizing what was being created in his brain. MANK doesn’t. It shows us the angst of Mankiewicz’s daily struggles to concentrate on his job, true, but none of it is about how he gets the words on the page. We see him struggling with the bottle and the broken leg he suffered in a car accident right before his writing job on KANE started, but where is his writer’s journey?

In flashbacks, the film dramatizes Mank’s run-ins with studio heads, his playful bantering with friends and colleagues, and most impressively, his strained interactions with the 1 % at tony parties hosted by the magnate Mank would soon be pillorying – William Randolph Hearst (Charles Dance). They connect the dots some between how Mank turned Hearst into Kane, but mostly MANK assumes we all know CITIZEN KANE backward and forwards and there’s no need to be explicit.

What the film does succeed spectacularly at, and revel in, is the clever rendering of every element of Hollywood from that period. The moody, black and white cinematography by Erik Messerschmidt is gorgeous. Kirk Baxter’s editing, riffing on the style employed by original CITIZEN KANE editor Robert Wise, is at times cheeky, other times frightening. Reznor and Ross’ score foregoes the typical modern synth sound they utilized in THE SOCIAL NETWORK and THE GIRL WITH THE DRAGON TATTOO for lush orchestrations that recall Bernard Herrmann. Fincher even puts small circles up in the right corner of the frame every 20 minutes to ape how reels let projectionists of yesteryear know when to change over. It’s a lovely touch.

Oldman wisely underplays Mank, even when he’s falling drunk. Amanda Seyfried delivers an exceptional performance as Marion Davies, capturing both her snappy tongue and effortless sensuality. Arliss Howard makes the conniving and hypocritical studio head Louis B. Mayer into a hilarious foil. And Charles Dance makes Heart both menacing and elegant, but then again, that is the veteran character actor’s forte. (His final monologue about an organ grinder’s monkey might be Jack Fincher’s finest moment in the script.)

Unfortunately, Sam Troughton’s take on producer John Houseman plays as far much of a nelly and not enough of the maverick that he was, and Tom Burke’s Welles barely has enough screen time to register as little more than a glorified cameo. Why the film all but excludes Welles from its narrative is inexplicable, especially given that the final confrontation concerns Mankiewicz pressing Welles for proper screen credit. That should have been a more important thread throughout and seems to come out of left field in the final act.

CITIZEN KANE is undoubtedly one of the greatest films of all-time, and the controversy surrounding Mankiewicz’s contributions to it have been chewed over forever, most notably five decades ago when film critic Pauline Kael made the case that Mank was responsible for the script almost in its entirety. There should be more of that in MANK too, but the subject of writing remains evasive throughout. There’s tons of style, but not quite enough substance.

MANK premieres in theaters this Friday, November 13, before streaming on Netflix starting December 4.

from The Establishing Shot https://ift.tt/38zKJRs
via IFTTT