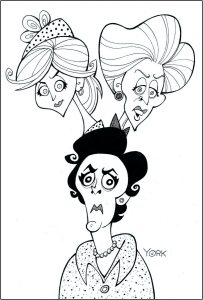 The activist author Terry Tempest Williams argued that the greatest sin women commit is in their failure to support each other. That is the sin that Queen Elizabeth commits throughout the fourth season of THE CROWN, a turning point in the series as the protagonist starts to more closely resemble a villain. Elizabeth fails to support Margaret Thatcher and Diana Spencer properly in the narrative, especially because they threaten her status as the most prominent woman in England. With friends like the Queen, who needs enemies, right?

Thatcher was England’s first female prime minister, elected in 1979, and Spencer became Prince Charles’ wife in 1981. They were two superstars, easily outshining the Queen in the early 80s, but ultimately, the monarch couldn’t manage her growing insecurity properly and enabled actions that would bring down both of these fierce and talented women. Show creator Peter Morgan and his team focus on Elizabeth’s passive/aggressive skullduggery throughout the 10 new episodes premiering on Netflix on November 15 and their narrative is never less than riveting.

It’s easy to see why Elizabeth (Olivia Colman) would bristle at the rise of Thatcher (Gillian Anderson). The new PI was callously conservative, headstrong to a fault, and showed precious little reverence for the traditions of the royal family. In early episodes, Thatcher acts like oil to Elizabeth’s water, barely hiding her contempt for all the Queen’s pomp and circumstance she gets dragged into. Thatcher all but seems to physically ache whenever she comes in contact with Elizabeth, refusing to be warm even when Her Majesty tries her damndest to connect with her.

Watching Colman and Anderson spar, bitching and sniping at one another, is easily the greatest pleasure of the new season. They’re like a posh version of Neil Simon’s THE ODD COUPLE, sneering and harumphing continually. Anderson is a haughty hoot, snarling and grinding her teeth, taking oodles of time to deliver her lines. And Colman, now in year two of her portrayal, knows just how to make her character funny one moment and chilling the next. Her Elizabeth is not only presented as a bit batty but also quite petty. She stands on protocol constantly, refusing to budge, and is so immersed in her own head, the Queen barely knows her own children. Mother of the Year, she most certainly is not.

She’s especially lax when it comes to caring for Diana, her new daughter-in-law. As presented here, Di (Emma Corrin) is a hot mess: barely out of her teens, naive, and struggling mightily against bulimia. You’d think Elizabeth would take more of a rooting interest in seeing her succeed, but her jealousy continues to green as Di captures the imagination of the country’s subjects. And even though Diana was handpicked by Elizabeth and her husband Prince Phillip (Tobias Menzies) to make an honest man of their adulterating shit of a son Charles (Josh O’Connor), the Queen does little to steer the ship. Diana tried but fought for her marriage with little help. Charles continually cherished the married Camilla Parker Bowles (Emerald Fennell), visiting her constantly, while the Queen mostly buried her head in the sand.

THE CROWN treats Charles as an even worse villain than his Mumsy, and O’Connor gives a brilliantly hissable performance throughout. In scene after scene, the stooped, depressed prince is a boor, so much so that his sister Anne (Erin Doherty) calls him “Eeyore.” The other royals come off quite shabbily too. Princess Anne seems to be channeling characters from MEAN GIRLS with her petty back-biting, and Prince Andrew (Thomas Byrne) is presented as a chuckling perv, suggesting the unscrupulous rogue that would soon party far too hearty with Jeffrey Epstein on his fantasy island.

The one royal the series exhibits sympathy for is Diana. Despite her immaturity, she has a good heart and is showcased as the only titled member of the palace who didn’t act entirely entitled. Corrin has Di down physically and captures her essence as well. The timid voice, the staring eyes from under the hood of her hair, it’s an incredible performance, one easily worthy of an Emmy next autumn. Corrin only has a handful of credits but she’s a real comer. She can change emotions on a dime, like when she’s basking in her triumph after performing Billy Joel’s “Uptown Girl” at a benefit for Charles, only to be shattered in seconds by his furor at her stealing the limelight. Corrin’s so good, you’ll want to offer Diana a cot and some warm soup.

THE CROWN continually gives the Queen opportunities to take control of her son’s atrocious behavior but she cannot land the plane. Her weaknesses led to the royals becoming trashed tabloid fodder, a laughing stock really. Rather than show pluck like she did in the previous seasons, the Queen here is hopelessly narcissistic, fretting about tradition while failing to understand the modern world. The Queen barely supported Thatcher and even broke protocol to sell her out to a ravenous press. Thatcher was no victim, a woman wholly earning contempt, but even she didn’t deserve the backstabbing Elizabeth gave her.

Because she’s so passive this season, Elizabeth feels more like a featured player than the lead at times. Claire Foy shows up briefly in the 10th episode in a flashback and you’ll realize just how much a shell this queen is of her former admirable self. Elizabeth failed to live up to so many moments, especially the hardships of her countrymen during the brutal recession of the early 80s. The best episode of this series is the fifth one when an unemployed interior designer breaks into the castle to confront her about his economic woes and for a few minutes, Elizabeth is in tune with one of her subjects. Alas, it is all too shortlived.

The fourth season may very well be the series’ most dramatic so far, and it’s certainly its saddest. Knowing what’s coming for Diana in subsequent seasons adds an unnerving pall to the proceedings this go-round. Still, THE CROWN is an impeccably crafted, gorgeously shot, and fantastically performed saga. (Helena Bonham Carter deserves special plaudits for her turn as a disgruntled and dying Princess Margaret too.)

THE CROWN loves its royals, yet also pities them, and maybe even reviles such scoundrels. You will too.

from The Establishing Shot https://ift.tt/3eLeMXC
via IFTTT