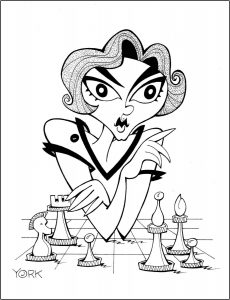 Original caricature by Jeff York of Anya Taylor-Joy in THE QUEEN’S GAMBIT. (copyright 2020)

The new Netflix miniseries THE QUEEN’S GAMBIT is chock full of riveting themes: obsession, sexism, and addiction…to name just three. The fictional journey of an orphaned girl in the late 1950s who becomes a chess prodigy by 12 and a champion by 15 is a compelling one, a road filled with triumphs and tragedies. But as the seven hours of the show spool out, the true theme of the series is revealed and it’s not in the endgames of chess champion Beth Harmon (Anya Taylor-Joy). It’s in the journey, one that Beth learns to enjoy as much as winning.

It takes Beth a while, however, to appreciate the smaller victories. When the story starts, the eight-year-old girl (Isla Johnston) has survived a horrendous car crash that took the life of her mother Alice (Chloe Pirrie). She’s packed off to a girls orphanage, and right off the bat, writer/director Scott Frank (OUT OF SIGHT, LOGAN) makes it clear he isn’t interested in traipsing over the cliches that come with typical rags-to-riches champion’s story. For starters, the orphanage is not an insufferable place. Granted, there are rules, protocols, and a grey-green interior that is hardly inviting, but the institution is not a cliched prison camp. If anything, it’s Beth’s surliness that fills the halls with negativity. She’s moody and obstinate, doing her best not remain an outsider, all while clearly nursing an enormous chip on her shoulder. (The reason why is revealed in the final episode and it is indeed a doozy.)

Despite her best efforts to stay introverted, two people reach out and are able to touch her. One is sassy orphan Jolene (a memorable Moses Ingram). She’s older, black, and well aware that those traits make her hard to place in a middling, lily-white home. Nonetheless, her upbeat nature compels Beth and brings her out of her shell. The second friend she makes is the quiet janitor Mr. Shaibel (Bill Camp). He’s so lonely he plays chess against himself in the basement, but soon enough, he recognizes her as an equally damaged individual and takes her under his wing. Shaibel teaches Beth the intricacies of the game and soon she’s on her way to being a prodigy.

Chess gives Beth purpose and it becomes her obsession. So do the tranquilizers the orphanage makes available to help the girls sleep. The green pills take the edge off of Beth’s angst, and soon she’s addicted to them as well as the game. Yet, despite her medication peccadilloes, Beth still manages to become a champion chess player in the state, besting the boys at the nearby high school, as well as their male coach, and continuing her streak at various state contests. However, even with her newfound celebrity, she’s still discriminated against and belittled for being a girl daring to compete in a man’s world, and she continues to find solace in drugs.

Beth’s talents eventually draw the attention of the Wheatley’s, a childless couple looking for a girl to adopt. They take her into their lovely home, but rather than count her blessings, Beth angles to use them for her own selfish purposes. While Mr. Wheatley (Patrick Kennedy) is away on business most of the time, Beth starts to exploit her adoptive mother Alma (Marielle Heller). She cons her out of money and pills while the lonely woman drinks away her lonely days and nights.

An opportunity to win prize money at a Las Vegas chess tournament presents itself so Beth talks Alma into taking her there. It’s here, in the third episode, where the series starts to turn, revealing its true theme and reveling in it as well. Beth’s chess ambitions still drive the story but her journey is what starts giving her life more and more joy. Beth becomes smitten with the lush, interior design of the Vegas hotel, not to mention the tony offerings of room service and the high fashion elegance of the big city. On the Strip, she also develops a genuine friendship with Alma. They share dreams and fears, as well as liquor, bonding almost as sisters.

Filmmaker Frank continues to showcase the host of delights Beth discovers after that, often in the splendid production design of the period that attracts her eyes. Soon, she’s reevaluating everything that comes her way: opponents become friends or lovers, New locations become exciting vacations, and even the Cold War Ruskies who were supposed to be her greatest rivals turn out to be generous folk, competitors Beth comes to admire, even cherish in ways.

Frank certainly knows how to make the most out of Beth’s chess competitions, showcasing exciting sports film tropes utilized in everything from ROCKY to FORD V. FERRARI. Beth’s matches are chock full of swirling cameras, crackerjack editing, and a riveting underscore. (He doesn’t make chess entirely understandable to the novice, but that isn’t a crucial mistake.) Frank also makes the most of his actors with their reactions expertly conveying the delicate emotions of winning and losing passing over their faces. Still, his miniseries is at its most affecting in what goes on between the matches. There is where he showcases Beth becoming a well-rounded woman, not just a resounding victor.

Taylor-Joy is marvelous throughout, lending her quiet character an intensity in her eyes and body language that speak volumes. Hers is a brilliant physical performance, as intricate as any in years. Frank also does well by the other two Beths, letting Annabeth Kelly and Johnston both shine consistently in their flashbacks. As three of Beth’s main rivals, Thomas Sangster-Brodie, Harry Melling, and Jacob Fortune-Lloyd create vivid characters you’ll root for as well. And Heller, best known for being an award-winning director and screenwriter (CAN YOU EVER FORGIVE ME, THE DIARY OF A TEENAGE GIRL) could have a full career as an actress if she wanted. She’s incredible here: moving, witty, and ultimately, tragic. Her performance is Emmy-worthy, as is Taylor-Joy’s.

In chess, the Queen’s Gambit is an aggressive move, maneuvered to take control of the center of the board, one of the keys to winning at chess. It’s perfect symbolism for Beth as she tries to take control of her life and wrest the odds in her favor. She flails and fails a lot, but more often than not, she discovers what her best moves are. After all, only one move can ultimately checkmate an opponent. But it’s all the moves up until then that ensure the victory.

from The Establishing Shot https://ift.tt/3jLSmGj
via IFTTT