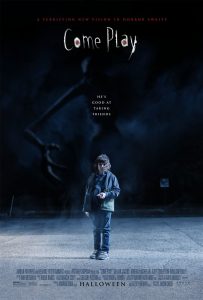 The new horror film COME PLAY does so many things right in the genre, it’s almost as shocking as some of the scares within it. The movie refreshes tired tropes, infuses wit and suspense into every scene, and exploits sound, shadow, and performance as well as any frightener of the last decade. Written and directed by Jacob Chase, it’s a minor miracle amongst the compromised cinematic landscape that is this year, a film that deserves both an audience and serious awards consideration.

For five years, I reviewed horror films for the Examiner online and came to know the sublime and the dregs of the genre equally. Chase clearly is a fan of the genre, an enthusiast, and a serious student of all that’s gone before him. That’s why he can employ dozens of tricks of the trade and make them seem utterly fresh. His jump scares aren’t hoary and groan-inducing. His “monster under the bed” trope is given an ingenious spin by trading out the floor for digital devices. And in making the beast a byproduct of our screen-obsessed culture, Chase makes a stinging commentary about our addiction to TV, laptops, and handheld devices. It’s a cynical work, of course, but shockingly, COME PLAY also stands as an incredibly moving horror film as well. You’ll both gasp at its terror and tear up at its ending.

Chase’s story is an ambitious one, particularly with the complex protagonist he’s placed at the center of it all. Oliver (Azhy Robertson) is an autistic nine-year-old, one who has trouble speaking and can only express himself by choosing designated words predetermined on his cellphone. He’s a lonely kid, trapped in an external world he’s struggling to understand, but his external world isn’t easy either. Mom Sarah and Dad Marty (Gillian Jacobs and John Gallagher, Jr., both superb) are on the verge of divorce and it has driven Oliver even more inward.

School is no relief either, as Oliver is designated a special needs student, and unfortunately, becomes one whom his classmates bully. He’s in desperate need of some friends and one night, the opportunity arrives. While surfing on his cellphone, a story pops up entitled Misunderstood Monsters. Is it a new app? Of course, Oliver is curious, so he starts reading. The words in it seem cute and rhyme. The illustrations are eerie but compelling too. Things seem harmless at first, but as Oliver reads on, the story’s words and drawings start to lurch towards the treacherous.

The digital story even starts to foreshadow frightening events in his bedroom. Lights go out, strange, scratching noises keep getting louder, and something in the darkness seems to be coming for him. Oliver, terrified, closes his door, hoping to keep whatever is causing the horrors out of his room. Then, in the first bravura move from Chase, the boy returns to his bed only to discover that the door has been opened anew. Who did it? Is it the monster named Larry from the digital storybook?

How scary can any beast named Larry be? Verrrrrry scary. He may have a cordial name, but the beast is ten feet tall, crippled and hunched over, and almost skeletal in appearance. The illustrations in the digital book show us exactly what he looks like but Chase is shrewd enough to not show too much of the actual beast too soon. Instead, he teases how much we see, making it all the more clever because Larry can only be seen whole onscreen. To the naked eye, the beast is invisible. It seems that Larry is all too well aware of our preponderance for staring at screens, so that’s where he can be seen to his fullest.

At one point, the invisible Larry descends upon a parking lot booth where Oliver’s dad works, and his unseen visage gets defined by swirling papers sticking to his spindly body. It’s a virtuoso moment, yet one that Chase doesn’t oversell. The director has it occur in the background, and if you’re not watching closely, you might even miss it.

In fact, the filmmaker wisely chooses such shrewd approaches every step of the way. The bullying kids are redeemed quickly to become more important characters and allies of Oliver’s. The visual effects are created mostly in-camera, outside of Larry’s full spectrum, to make the events in the story play all the more realistically. And even when the director goes big, making some of the beast’s noises shockingly loud, they’re justified because that’s how Oliver would hear them in his overly-sensitive, autistic world.

At times, you might wonder how Chase is going to turn many of the familiar tropes he employs on their ears, but he manages to do so with great aplomb. Even though the genre has been crammed with precocious kids (THE SHINING, THE RING), weak parents (THE BABADOOK, ESTHER), and evil forces on the hunt for a child (POLTERGEIST, INSIDIOUS), Chase refreshes them by adding clever twists to the storytelling and bringing a lot of nuance to each character throughout the run of the film.

Take the scene late in the game where Marty is pinned down by Larry in that parking lot booth – the often doofus dad rises to the occasion and outsmarts the intruder by hiding himself away. Marty even manages to escape in his truck. Then, during the ensuing chase scene, Larry gains on Marty as the street lights pop off behind him, but the dad still doesn’t lose his cool. Instead, he keeps it together and we cheer him on accordingly. Chase has little use for easy victims that plague too many inferior horror entries so he avoids such mistakes here.

In fact, Chase more often than not wholly zigs in places where most other filmmakers would lazily zag. Ringleader bully Byron (Winslow Fegley) turns out to be a mensch, a genuinely likable character far from the bad boy first shown. Mom Sarah also is hardly played as the saint that most films would make such a character. Larry is even portrayed as an often poignant villain, one just looking for a little love himself. In fact, there’s plenty of pathos all around as Chase understands that horror more often than not succeeds based on how much audiences care about those in peril onscreen.

And in Oliver, Chase has created an endearingly sympathetic character, one pluckier and braver than most protagonists. His casting of Robertson was a masterstroke too as the child actor stuns in virtually every scene. The boy may only be ten, but his performance as the addled and fidgeting child should put him in contention for the Best Actor race this year. I’m not overselling his accomplishment to tell you that he reminded me of Leonardo Di Caprio when he stunned the world playing his special needs youth in WHAT’S EATING GILBERT GRAPE back in 1993.

Not only is COME PLAY a smart and emotional thriller, but Chase has a field day indicting a society that can’t seem to exist without having a screen close at hand. Oliver needs them to communicate, but what’s the excuse for the other characters in the story? Late in the game, Sarah purges her home of all devices and earns one of the biggest laughs in the film as she hauls out a dozen of them to the street. Is our screen addiction as overbearing as the monstrous Larry? Indeed, COME PLAY could almost be a savaging 90-minute episode of BLACK MIRROR. But what it is, is easily this year’s best horror film.

from The Establishing Shot https://ift.tt/34JlYQC
via IFTTT