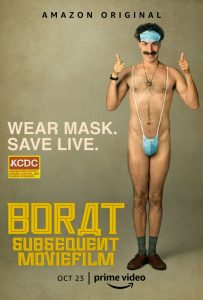 Is there a more daring or dangerous comic than Sacha Baron Cohen working today?

Since his Ali G days, the Englishman has been playing “Gotcha!” with various stuffed shirts, primarily in the USA, and exposing our nation’s racists, charlatans, and hypocrites. Cohen made his biggest splash in 2006 in the film entitled BORAT: CULTURAL LEARNINGS OF AMERICA FOR MAKE BENEFIT GLORIOUS NATION OF KAZAKHSTAN. He played a naive foreign reporter out to learn the ways of the greatest nation on earth and found the George W. Bush America rife with yes, racists, charlatans, and hypocrites.

In his Borat guise, he wheedled his way into the homes, meeting rooms, and banquet halls of some of those in the Republican Party most in need of a takedown, and boy, did he do just that. Adding to the hilarity was the fact that most of his ‘victims’ had no idea they’d been pranked. Now, Cohen is back as Borat for a sequel entitled BORAT SUBSEQUENT MOVIEFILM, premiering on Amazon Prime today,  and it’s amazing how little has changed both in politics and the comic’s aggressive, take-no-prisoners humor.

And it’s a perfect time for Borat’s return as the Trump era has ushered in an even worse group of scoundrels than during the Bush years, and Cohen goes after them with even more zeal than before. This time, however, he has to employ other personas as his Borat character has become far too recognizable worldwide. (There’s a funny sequence in the film where Cohen must outrun rabid fans wanting Borat’s autograph.) Just as he did in his 2018 Showtime series WHO IS AMERICA? Cohen has come up with a series of new guises to go after his targets so they don’t see him coming.

Even so, it’s Borat who ‘plays’ them here, adding a layer of silliness to it all as they still sound similar even if Cohen is in wigs and fat suits. The narrative starts with Borat doing hard labor as a prisoner of the state after humiliating both his homeland and the USA in the previous film. That’s an inspired in-joke right off the bat, but soon the story kicks, and Borat is given a chance for redemption. He’s tasked with traveling to the USA again, this time with a celebrity monkey in tow, to bestow upon Vice-President Mike Pence as a peace offering.

Borat welcomes the chance, even though his 15-year-old daughter Tutar stows away because she wants to meet her idol, Melania Trump. There are some very naughty jokes teasing both the first lady and a woman’s place in third world countries as Borat keeps her in a cage while traveling. Newcomer Maria Bakalova who plays Tutar has a field day in the role, demure and sweet one moment, raunchy and brusque the next. (Much like Borat, of course.)

Adding a daughter to the storyline was a stroke of genius. It plays up notions of family for Cohen to spoof but also leans in hard on the sexism running rampant during our #MeToo times. Plus, Bakalova is fantastic in the role and should be in the running for an Oscar nod for Best Supporting Actress. Not only is the Bulgarian-born 24-year-old a wonderful comic, but she has even more manic energy onscreen than Cohen.

Cohen gets away with even more dangerous behavior. Shooting this during the early months of the pandemic, his Borat character cajoles two rednecks into letting him stay with them and together they ridicule masks, Obama, and even equate the Democrats in government with literal demons. It’s a delicate game of cat and mouse, but the two bumpkins never seem to be the wiser.

And while there is no scene here as memorably outrageous as the nude wrestling match between Cohen and Ken Davitian in the first one, a crazy dance number at a debutante ball comes close. Borat takes his daughter there to learn of Southern rituals about womanhood and they end up performing a spontaneous jitterbug to Tutar’s heavy period. In such scenes, Cohen is not only challenging the antiquated norms of our nation but also the expectations of an audience not quite ready for how far Cohen will push them as well.

Much has been made of the third act scene that catches Rudy Guiliani in a compromised position with Tutar in a hotel bedroom. You’ll have to judge for yourself, but suffice it to say, Rudy comes off skeevy well before he found himself on the bed with the 15-year-old Tutar character. Cohen et al love their controversy and this scene will be chewed over for quite some time.

Both the writing, credited to 11 people, and the direction by Jason Woliner, keeps things brisk and buoyant. The camera work and editing are especially good here too, maintaining the look and feel of a documentary and seeming to get all kinds of footage, even in places you’d think they would be able to gain access to.

Some may criticize Cohen for retracing his steps as Borat with a “Is this trip really necessary?” dismissal, but that misses the comic’s broader point about how necessary it is to keep after the miscreants he’s targeting here. Cohen realizes that the powers in the capital and the statehouses are not doing enough to combat such evil manifesting itself throughout our nation’s discourse. Nor are the press or public. When a paper of record like the New York Times takes until mid-2018 to call the POTUS’s plethora of lies “lies,” can there be any doubt that Cohen would feel obliged to take the opportunity to lambast those who needed it?

Cohen is not only the nation’s most daring and dangerous comic, he might just be its most moral.

from The Establishing Shot https://ift.tt/3jsm4Qu
via IFTTT