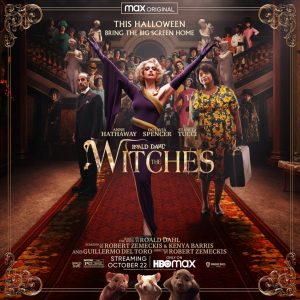 Writer Roald Dahl’s work THE WITCHES must have felt like catnip to filmmaker Robert Zemeckis. Dahl’s story has all the hallmarks of the majority of Zemeckis’ best movies: vivid characters, an extravagant fantasy world, glib wit, and magical set-pieces just waiting for a crew of CGI artists to sink their teeth into it. Indeed, this version, which premieres on HBOMAX today, betters the 1990 film starring Anjelica Huston on a number of fronts, even if it strains to do so. t’s a film brimming with heart and technique, though Zemeckis tends to push the material to excess as is often his wont. I’m not sure that’s what adult audiences want, but it will likely play like gangbusters with the children watching.

Zemeckis has always been one of Hollywood’s most incredible talents, a man who could make twisty comedies (USED CARS, BACK TO THE FUTURE), moving character studies (FORREST GUMP, FLIGHT), and effects-laden fantasies (WHO FRAMED ROGER RABBIT, DEATH BECOMES HER) with equal aplomb. However, starting with his adaptation of THE POLAR EXPRESS in 2004, Zemeckis seemed to become preoccupied with filming stories dominated by CGI and the fantastical, often to the detriment of consistent tone, three-dimensional characterizations, and airtight plotting.

Films like THE POLAR EXPRESS, BEOWULF, and WELCOME TO MARWEN were searing with state-of-the-art technique, but beyond such advances in production value, their narratives left a lot to be desired. They were too maudlin, weighted down with pretentiousness, and leadenly-paced. Sometimes, Zemeckis seems like a chef who nails the spices, side dishes, and plating but overcooks the meat. That’s evident in his take on THE WITCHES. It’s a visual dazzler per usual, with incredible effects and eye-popping production design, but some of the acting on display borders on terrible, and Zemeckis’ tone is all over the map.

Zemeckis starts out well, placing Dahl’s material in the context of a black family in 1960s Alabama. That move adds some surprising depth to the backstory of a grandmother and her beleaguered grandson being tormented by a coven of entitled witches preying upon them and their small, close-knit community. Even with Chris Rock narrating at full energy as Charlie, the foundation of the story feels grounded due to realistic performances by Octavia Spencer as the grandma and Jahzir Kadeem Bruno as the young Charlie. Together, they decide to leave their home to escape the witches beckoning at the door, finding their way to a fancy hotel to hole up in as their retreat.

In tow with them is Charlie’s pet, a mysterious little mouse named Daisy, and Zemeckis’s CGI artists bring her to life in a realistic way that complements the tone and work of Spencer and Bruno. Even though Stanley Tucci plays the hotel manager a bit broadly when he’s introduced, the film still feels consistent and disciplined as Grandma, Charlie, and Daisy settle in and try to figure out how to thwart their enemies.

But then Zemeckis takes a sharp turn towards the ridiculous when he introduces the coven of witches descending upon the hotel for a convention.  They’re dressed to the nines as hoity-toity women of privilege, there to raise money for their charity preventing child abuse. What they’re really after, however, is the abuse of kids themselves. Just as in Dahl’s original prose, kiddies are the number one enemy of witches, and they have developed a potion to turn them all into pet mice.

Zemeckis’ inspiration seems to be Glenn Close’s hammy, extravagant take as Cruella de Ville in the live-action remake of 101 DALMATIANS. These women are all glammed out in absurd, cartoonish costuming that feel like a bad drag show. Monochromatic color schemes, broad-brimmed hats, long gloves, extravagant wigs…it’s like they’ve all walked in from a parody of some sort. Even the clicking and clacking of their heels in unison feels more like something Mel Brooks would have done with his stormtrooper chorus boys in THE PRODUCERS. This is supposed to fit with the beleaguered backstory of the two African-American protagonists in Alabama during the 60s?

Then, when the witches close the doors to their banquet hall and reveal their true selves, the film soars so far over the top, it never really recovers. The witches are revealed to be hideous monsters, but they already were hideous caricatures of women, so the transition doesn’t play as it should. It is the key pivot in the book and the 1990 film, but the witches here are way too cartoony as both Jekyll and Hyde. And when Zemeckis showcases their body transmogrification, he ladles on so many grotesqueries, it feels more like R-rated horror than friendly, family fare.

Not only does Lillith, the Grand High Witch, played by Anne Hathaway have Black Dahlia-esque facial scars, but her bald pate is littered with festering boils. She has claws for hands under those gloves, and three-toed hooves tucked into her heels. In particular, Zemeckis seems to love that garish middle toe of his witches, an extended digit that curls as it crawls shown in close-up by the director over and over again. And then the director starts turning the witches into hideous rats and the film goes from fun to fugly. It all feels more like R-rated horror than friendly, family fare.

Perhaps Zemeckis wanted to shock but did he really want part of the consternation to be in how wildly Hathaway overacts her part? The Oscar-winning actress is usually a crackerjack comedic performer, but here, she plays it so broadly it turns what should be the funniest character in the film to a detriment.

Certainly, Zemeckis has gone way over the top before, like in DEATH BECOMES HER, but even with body parts twisting and flailing in that tale, stars Meryl Streep and Goldie Hawn still kept it grounded. They didn’t act like they were in a farce, playing every bit to the balcony. After all, isn’t the first rule of comedy supposed to be that no one in a comedy should act like they know they’re in one?

The later scenes where Zemeckis concentrates on Charlie, now in mouse form, running around the hotel with fellow mice Daisy and Bruno (Codie-Lei Eastick) is delightful. Daisy is voiced by the ever-charming Kristen Chenowith during these scenes and each line reading of hers is splendid. But when Lillith shows up again for her big showdown with the mice and grandma, the film goes way too big again. Much of the film is great. Too much is grating.

Audiences know what an artist Zemeckis is and that he can make us believe just about anything onscreen, be it a man napping on a tightrope in THE WALK or a jetliner flying upside down in FLIGHT. If only he could convince himself that even when it comes to extravagances in storytelling, less is still always more.

from The Establishing Shot https://ift.tt/31Acoxj
via IFTTT