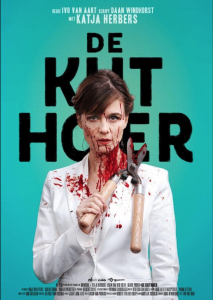 Few films get darker than THE COLUMNIST, a twisted revenge tale that also serves as a middle finger to social media. Playing as part of the Chicago International Film Festival this week, the 2019 film from Holland (De Kuthoer, in its native Dutch tongue) sneaks up on you. At first, it appears to be a subtle character study about a bullied columnist fighting off trolls on Twitter, but as it goes on, the story more and more resembles a horror film. (Just look at the poster!)

The story starts with famed columnist Femke Boot (Katja Herbers) making her case on a talk show for a greater need for civility on platforms like Facebook and Twitter. Fellow guest and horror author Steven Dood (Bram van der Kelen) laughs with a twinkle in his eye at her naïveté. After the show, Femke is anxious to see how the Twitter-verse has reacted to her appearance and she is appalled to find that a number of trolls are not only condemning her opinions but calling her horribly sexist things and even threatening bodily harm.

At home, Femke’s politically-minded daughter Anna suggests that the single mom fight fire with fire. That’s what Anna is doing after being canned by her high school principal for writing a controversial column in the school newspaper. (The apple doesn’t fall far from the tree in the Boot family.) Anna is planning a protest rally at school and it motivates Femke to find a way to fight back in turn against her haters online.

Femke starts doing research on her worst trolls and discovers that one lives right next door. He’s perfectly amiable to her in public, but he’s a belligerent jerk behind his fake moniker on Twitter. Not long after, Femke takes the opportunity to cause his accidental death and it buoys her. And when she completely gets away with it, the columnist feels even better.

Soon enough, Femke is doing well, concentrating on writing her book for a demanding editor and starting a relationship with Steven. He turns out to be a real sweetheart underneath all his Stephen King-esque trappings and they enjoy playing house together. But happiness remains a fleeting thing for Femke, particularly as she cannot steal herself away from what people write about her in 280 characters. Despite everything she’s got going, Femke is lured by the siren song of revenge and ends up stealing away at night to kill off more and more of her haters.

THE COLUMNIST could be regarded as a feminist fantasy, a dissertation on #MeToo, but it actually has two much more prominent themes. First, it slams society worldwide as becoming far too casual about violent words and threatening actions. Secondly, the film indicts the navel-gazing that comes with staring at computer screens all day long. No one has a clue what Femke is up to because no one seems to be paying any attention. They’re all consumed by what’s going on in their own little bubbles.

And as the film goes on, director Ivo van Aart slyly dials up the film’s cynical take on our humanity. The entire film is shot with a casualness that nicely complements the laissez-faire of the events onscreen. No bloodletting scene is overdone, Femke never has searing soul-searching moments, and it all spools out with a cool, glossy sheen to it.

THE COLUMNIST cuts with surgical precision, clocking in at just 86 minutes. Not a moment is wasted, however, and each scene has a real punch. Star Katja Herbers is terrific throughout, never overplaying her part even as Femke starts to give Leatherface a run for his money. Dark comedies rarely come better than this one. It’s nasty, biting fun.

from The Establishing Shot https://ift.tt/2Hrcbpd
via IFTTT