It makes sense that “Jezebel,” a movie about a 19-year-old who becomes an Internet fetish cam girl, would start off with some dirty talk. But it is Sabrina (Numa Perrier, who also wrote and directed) whom we get to know first as she’s talking on the phone in bed. Nothing unusual there, as Sabrina is dressed in strictly practical nightwear. It’s the conversation which soon grabs our attention, which grows increasingly sexual, then somewhat bizarre as Sabrina, who is Black, mentions her (very much not) blonde hair. After she hangs up, her artificially sexy voice also vanishes.

It’s an early indicator of just how much sex work requires providing a fantasy rather than simply a sexual experience. Unlike other films that dealt with phone sex, such as a “For a Good Time, Call…”, there’s a lot more urgency in “Jezebel.” For one, the unseen matriarch of the family is in the hospital due her to rapidly declining health, and Sabrina is packed into a small Las Vegas apartment with her boyfriend David (Bobby Field), young daughter Juju (played by Perrier’s own daughter Rockwelle Dortch), brother Dominic (Stephen Barrington), and 19-year-old sister Tiffany (played to perfection by newcomer Tiffany Tenille). As to be expected in such close quarters with limited resources, there’s some resentment to spare, especially between David and Tiffany, which is exacerbated by the fact that Sabrina is the only one with a job.

What first seems to be Sabrina’s story quickly becomes Tiffany’s after she takes a job as a Internet fetish cam girl after Sabrina calls Tiffany’s attention to their ad in the paper. When Tiffany responds, her experience is a surprisingly complex one from the beginning. During her interview, the owner of the site does ask her to strip down, which can’t be anything but demeaning. Once it’s determined that she doesn’t have anything on her body which would be detrimental to her work, Tiffany begins, calling herself Jezebel. 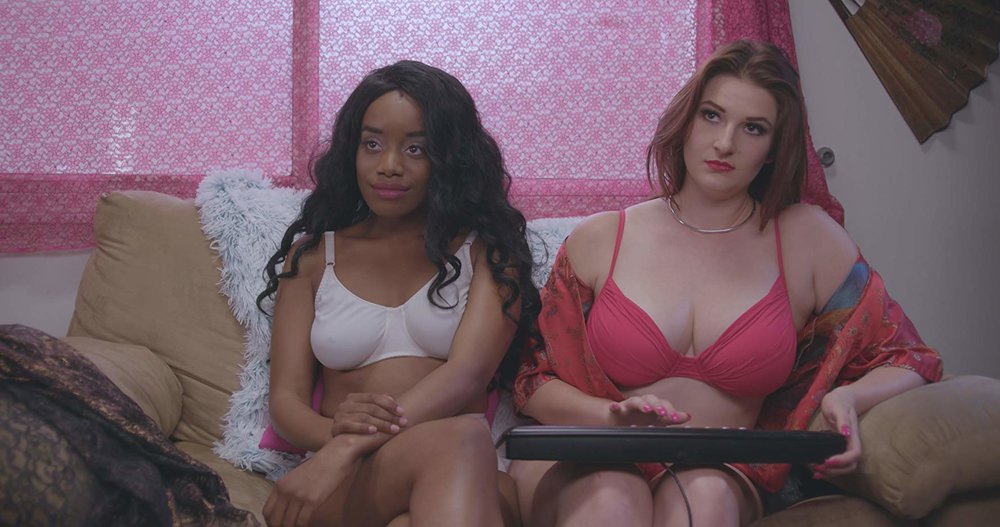 As Tiffany navigates her strange new workplace, it quickly becomes apparent just how much Numa Perrier herself lived the story she’s telling. There are little details that include instructions on how to simulate sexual acts, since any actual penetration would lead to criminal charges, as well as the myriad ways she and others react to the demands of their job. One co-worker even describes how she sees her current position as a step up from her previous work as a stripper, telling Tiffany, “The guys can’t touch you, and you don’t have to see how gross they are in person.”

Such an environment is rarely depicted with any kind of nuance, but Perrier disdains the hysterics and melodrama which so often accompany such depictions to deliver a deeply complex portrait of sex workers and the industry. There’s little doubt Tiffany is being exploited, and that her Blackness plays a role in how she is seen (at one point, a customer calls her a racial slur), but she is nevertheless able to find a kind of empowerment, making enough money to contribute to expenses and eventually move out of Sabrina’s home to live on her own, even if Sabrina has to push her to do it.

It’s far from the only time Tiffany benefits from Sabrina’s guidance. “Jezebel” is essentially a coming-of-age film, with Tiffany not only embracing and owning her adulthood, but her sexuality as well. So the relationship between the sisters becomes paramount. For some, it will be off-putting, maybe even horrific. Sabrina is not only the one who introduces Tiffany to sex work, she guides her throughout, providing her with a bikini and other supplies, including a gorgeous wig which becomes central to Tiffany’s persona as Jezebel. When Tiffany forms a connection with Bobby, one of her clients, Sabrina doesn’t discourage her from pursuing it, even helping her to prepare when Bobby and Tiffany arrange to meet in person.

Some will see this as Sabrina grooming Tiffany as a sex worker, and perhaps she is. Hell, she probably is. But she is also preparing Tiffany on how to best work within the limited options she has. The only truly frustrating thing about the film is also a reflection of its strengths. “Jezebel” may leave off just as Tiffany and Bobby, who early on admits that the time, energy, money, and various gifts he gives to Tiffany should be put towards his wife and kids, prepare to take their relationship to a new level. It’s clearly indicative of Perrier’s determination to keep Tiffany’s story, and her bond with Sabrina, front and center, but it’s no less frustrating to leave off just as that story is about to take a new turn. Then again, isn’t it pretty fitting that this film would leave us begging for more? More from not only the characters, but those playing them, as well as writer-director Numa Perrier. Hopefully this isn’t the last of we hear.

from A Reel Of One’s Own https://ift.tt/2OUpykV
via IFTTT